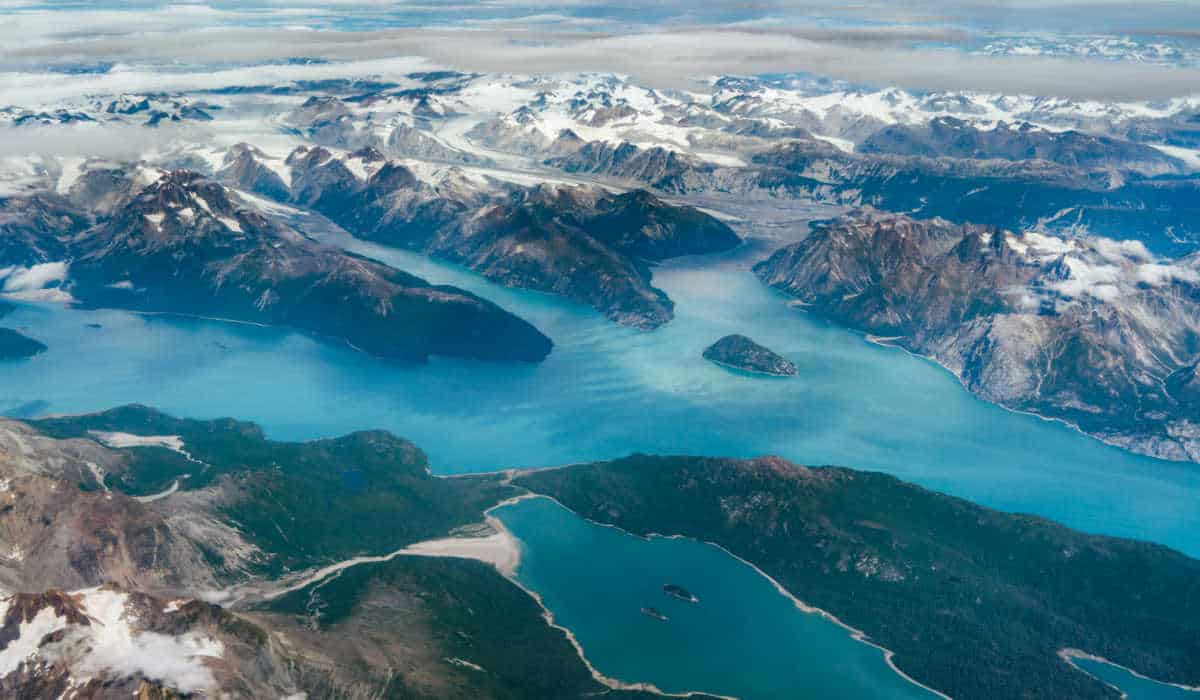 The Inside Passage is one of the most beautiful and intriguing waterways in North America, with many great sights to see along the way.

Since a lot of people who haven’t visited or lived in Alaska are not familiar with it, they often have a lot of questions.

We’ll start with a brief history of the route and then I’ll answer seven of the most common questions that we as Alaskans get about the Inside Passage.

History and Explanation of the Inside Passage

The Inside Passage refers to a water route in the Pacific Northwest that is traveled by many boats, ships, ferries, and other watercraft.

It grew in popularity during the Klondike Gold Rush in the 1890s. Many gold prospectors used the route as a way to get to Alaska.

The location provides smoother sailing and is less prone to storms than the open ocean. That combined with the beautiful sights makes it a very popular tourist destination, particularly for cruise ships.

It is also called “The Inland Passage,” “The Inner Passage,” or “Passage Intérieur” in French, which is one of Canada’s official languages.

Does the Inside Passage Freeze?

It does not, for several reasons.

Since most of the Inside Passage is in or near a rainforest, the climate is a lot more temperate than you might expect.

Temperatures rarely go below 20 degrees Fahrenheit in the winter, which means that you will occasionally get a few pieces of ice mixed in, but the sheer amount of water and strong tides prevent it from ever freezing over.

It’s still very cold in the winter, though, with wind and rain mixed in. I took an Alaska Marine Highway ferry through it in November one time and nobody went outside except for on-duty crew members and the smokers.

Does the Inside Passage Have Glaciers?

The Inside Passage has a ton of glaciers! Well, closer to a half-ton, I suppose, since it’s estimated to have roughly 1,000 of them.

The area was completely frozen over during the most recent ice age. Once the ice began to melt, the passage was formed and some of the ice remained in the form of these glaciers.

At least that’s what they tell me. I’ll be honest, I wasn’t really there when the ice age ended, so I can’t prove it one way or the other.

Juneau’s Mendenhall Glacier, the only one in Southeast Alaska that is accessible by road, is part of the Inside Passage, as are the nearby Sawyer and the Dawes.

Is the Inside Passage Part of Alaska or Canada?

Waters from both Canada and Alaska make up the Inside Passage, as well as the waters of Washington State.

The Gulf of Alaska and the Pacific Ocean are the main bodies of water on the northern side and Washington’s Puget Sound forms the southern end.

On the Canadian side, the Greater Salish Sea, the Johnstone Strait, and the Strait of Georgia make up the bulk of the Inside Passage.

It also runs through Cape Caution in British Columbia, which was named by the British Navigator George Vancouver due to the rocky terrain and bad weather, after he nearly lost his ship, the HMS Discovery, by driving it into a rock.

That story is the perfect example of why I would never sail the Inside Passage in a private vessel. I’ll leave that to the professionals so I can enjoy the lovely views.

Where Does The Inside Passage Start and End?

We’ve talked about the bodies of water that form the borders of the Inside Passage, so now we’ll look at the cities.

On the northern end, Haines and Skagway are both very close to the opening of Lynn Canal, which is considered the upper terminus.

It ends near Olympia, Washington, at the southernmost point of Puget Sound, which I would like to point out is not actually “disease-covered,” as Nirvana claims in their hit song “Frances Farmer Will Have Her Revenge on Seattle.”

In total, it runs for about 1,000 miles between the two points and is about 100 miles from east to west on the Alaskan side. It gets more narrow as it enters Canada and down into Washington.

Is the Inside Passage Considered “International Waters?”

Friends, this is why I do research to verify my answers to these questions. I had three paragraphs written out based on a “no” answer until I asked a professional and did some more research. The answer is now “some of it is, in a sense.”

“International waters” is actually not a legally defined term under international law. The principle of “open seas” or “high seas” is used, which comes from the Latin phrase mare liberum.

Water within 12 miles of a country’s coastline is called “territorial waters,” and they are directly controlled by the country that owns the shore. Beyond that, you have international waters.

However, countries are also allowed something called “Exclusive Economic Zones” (EEZ), which extend 200 miles from the shore.

The bordering countries are allowed a certain amount of control over these waters, but they are not allowed to restrict passage either on the water itself or in the water’s airspace.

“International Waters” doesn’t really mean much anyway, because the whole “the open sea is the wild west” thing is actually a myth.

You can’t get married by a ship’s captain on the high seas (unless he’s properly ordained as a minister) and you can’t commit felonies on the water without being prosecuted, either.

The country where you registered the ship has jurisdiction over you while in open waters and can prosecute you for any laws you happen to break.

To sum up, in a sense, they are international waters, but in practice, both Canada and the United States exert a certain amount of control over their respective portions and the Coast Guards of both countries patrol the waters.

Is an Inside Passage Cruise Worth It?

Oh, definitely. If you want to see glaciers, bears, whales, mountains, and a variety of other amazing sights at a safe distance, a cruise through these waters is highly recommended.

You’ll also get the enjoy the rich history and hospitality of both countries, as many cruise ships will dock in Prince Rupert or Vancouver, British Columbia, on their way from Seattle up to Alaska.

They can definitely be a little on the expensive side, but the experience is worth the cost. I’ve never been on a cruise, but I’ve lived in Southeast Alaska for over 30 years and, in all my travels, I’ve never quite found a place as beautiful as my home.

What is the Best Time and Way to See The Inside Passage?

The tourist season in Alaska is May to September because those are the ideal weather months. If you don’t mind the cold and a little snow, the winter months are a good time to visit the cities.

I don’t recommend the Inside Passage in winter, however, because strong winds, cold weather, and a combination of rain, snow, or both dominate the area.

If you aren’t a fan of cruise ships a great way to see the Inside Passage is to take an Alaska Marine Highway Ferry.

The ferry departs from Bellingham, Washington, and sails through the Inside Passage up to Juneau, Ketchikan, or Skagway.

Other Facts and Tidbits

The Inside Passage is one of the most popular tourist destinations in the United States, with over two million people passing through every year.

It is also how Juneau and other cities in Southeast Alaska get most of their freight. Since there are no roads to these communities, everything must be flown or sent on sail barges from Seattle or Bellingham and sailed up.

This is one of the reasons why it’s sometimes harder to find fresh fruit or produce in Southeast Alaska. Unless it’s flown in from Seattle, it all sits on the boat for two or three days on its journey north.

In addition to freight and cruises, there are also smaller excursion vessels that visit the Inside Passage. Many of these are focused on seeing wildlife.

One company that you might not expect to operate these expeditions is National Geographic. These can be pretty expensive, at $7,500 each for a double occupancy cabin or around $11,000 for a single.

That said, it is an eight-day cruise that starts in Juneau, sails around the Inside Passage, and then ends in Sitka.

Of all the sights that Alaska has to offer, some of my absolute favorites are found in the Inside Passage. There are over 1,000 islands filled with all kinds of amazing wildlife.

It’s also a great way to see raw, unfiltered Alaska. There are definitely cities and towns along the way, but a lot of what you’ll be seeing is untouched by humans.

It is the purest form of nature and one that most people don’t get a chance to see. I’ve lived in Juneau for 30 years and I’ve only done a few boat trips around the Passage in that time.

If you have the time, money, and opportunity, I highly recommend booking a trip through the Inside Passage.

Even if you don’t want to pay for a cruise, at the time of writing, an Alaska Marine Highway ticket from Bellingham, Washington, to Juneau, Alaska is less than $500 per person. Bellingham to Ketchikan is only $342.

You could also fly on Alaska Airlines or Delta from Seattle for less than $150 per person and take a ferry back down. Visiting the Inside Passage doesn’t have to be a strain on your budget.

No matter how you choose to make the voyage, you’re guaranteed to see amazing wildlife (and at a safe distance!) in their natural habitats. You’ll have memories and stories to share for years to come.