Haines is a community of about 1,600 people in the northern part of the Southeast Alaskan Panhandle.

The city gets its name from Francina E. Haines, the chairwoman of the committee who raised the funds to build the town. This makes Haines one of the few communities in Southeast Alaska whose name is not Tlingit in origin.

The top industries in Haines are similar to others in Southeast Alaska: tourism, fishing, healthcare, and government.

Haines is situated in the Lynn Canal, about 20 miles south of Skagway. However, due to the lack of a direct road, it is a 15-minute flight or a nearly one-hour drive through Canada between the two cities.

Fort William H. Seward was built in 1802 about half a mile from the city center as a response to the border dispute between Alaska and Canada that existed at the time.

It was the only official Army post in Alaska for about 20 years, where it was used as a training center for Alaskan recruits.

After World War II, the fort was decommissioned and sold to a group of private investors made up of five Army veterans, who intended to build a community there named Port Chilkoot.

In 1972, it was officially renamed Fort William H. Seward when it was declared a National Public Landmark. The area now consists of a hotel, art galleries, museums, and space for artists.

Things to Do In Haines

Visitors to Haines who come in November can see the world-famous Haines Bald Eagle Festival, where thousands of bald eagles return to feast on the nearby salmon at the end of their spawning runs.

This is the highest concentration of bald eagles anywhere in the world! November isn’t the only time to see bald eagles, either, as many can be seen in the wild or recovering from injuries at the Raptor Center year-round.

Haines is also very popular for backpackers and hikers, with many nearby mountains with varying levels of difficulty, from the moderate Mount Riley trail to the impossible Devil’s Thumb, whose northwest face has never been successfully ascended.

It is also home to the Sheldon Museum, named for the missionary Sheldon Jackson, which contains thousands of Native artifacts, as well as items relating to the Gold Rush.

There are also numerous excursions offered, including charter fishing, wildlife watching, hiking tours, and canoe trips, among others.

As Haines doesn’t have all the amenities of the larger cities of Southeast Alaska you may want to check out our full article on The Best Things To Do In Haines before planning your trip.

How to Get to Haines

Haines is one of the few communities in Southeast Alaska that is accessible from the road system, primarily through Canada.

However, most visitors come via cruise ships, which dock a few blocks from town near the former Fort William H. Seward site.

Unlike other cities in Southeast Alaska, Haines is not on the main cruise ship route and there are often only one or two cruise ships in town per day, unlike Juneau or Skagway which sometimes get up to five.

Haines is also accessible by boat, usually either through the Alaska Marine Highway System or by ferry from Skagway.

The local airport only receives small aircraft, mainly flights on Alaska Seaplanes from Juneau or Skagway. It is located about three miles from the city center.

There is also a seaplane base for float planes, although it is not very commonly used, with an average of 20 arrivals each month.

Where To Stay, Shop, and Eat

Haines has many great accommodations, including the Halsingland Hotel at Fort William H. Seward, which also contains a bed and breakfast.

Downtown hotels include the Aspen Suites, The Captain’s Choice, and the Eagle’s House, among others.

There are also several campgrounds in town, which are commonly used by hikers before setting out on the nearby trails. Three RV parks are also nearby, with two close to the city center and one about seven miles out of town.

The downtown area has many gift shops, with souvenirs, Billikens, t-shirts, art, and much more.

There are roughly 20 restaurants in the Haines area for you to enjoy, including the Alpenglow, the Fireweed, The Bambo Room, and the Frog Lady Fish Company. Many of these sell locally-caught seafood and burgers.

There are also several bars in town, including the Harbor, the Pioneer, and the Fogcutter. For a taste of hard alcohol made locally, the Port Chilkoot Distillery can be found in the Fort William H. Seward area.

Haines was known by the local Tlingit people as “Deishú,” which means “end of the trail,” as it allowed them to carry their canoes on land when they returned home from conducting trade in Canada. This saved them 20 miles of rowing.

In 1881, The Chilkat Tlingit in the area asked Sheldon Jackson, the famous Presbyterian minister who had been working with other Alaska Native groups, to send missionaries to them as well.

Jackson came to the area and helped to create The Chilkat Mission. Its name was later changed to Haines in order to honor the chairwoman of the committee that helped pay for the town.

Haines was also the head of the Dalton Trail, which was used by the Chilkat Tlingit to travel north and trade with the Athabascans in the interior.

Although no gold was discovered in Haines during the Klondike Gold Rush, it became an important supply center for prospectors headed to the Yukon Territory.

The people of Haines can’t wait to welcome you to the Lynn Canal area on your next exciting Alaskan experience! 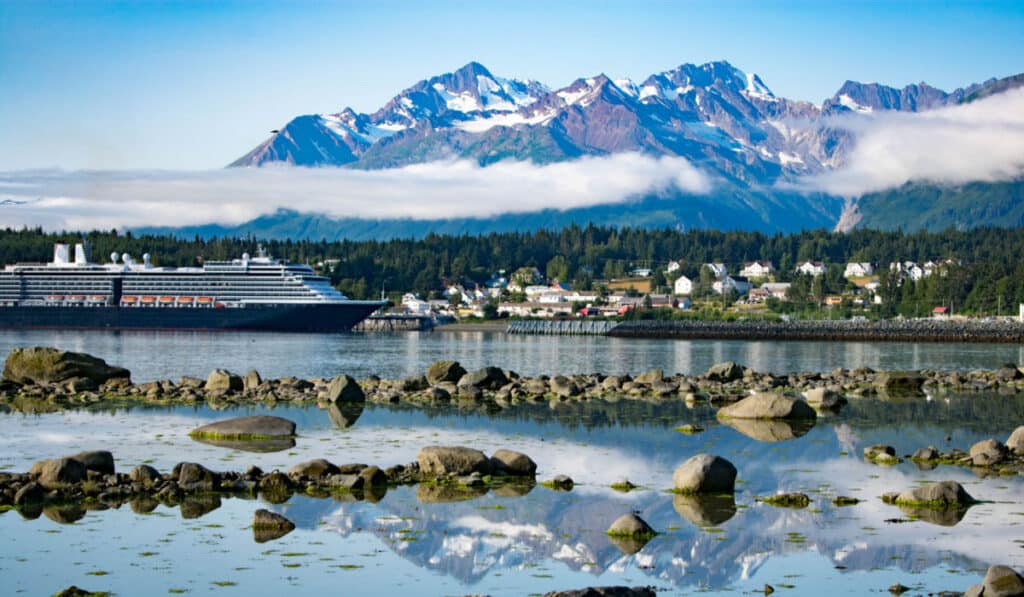