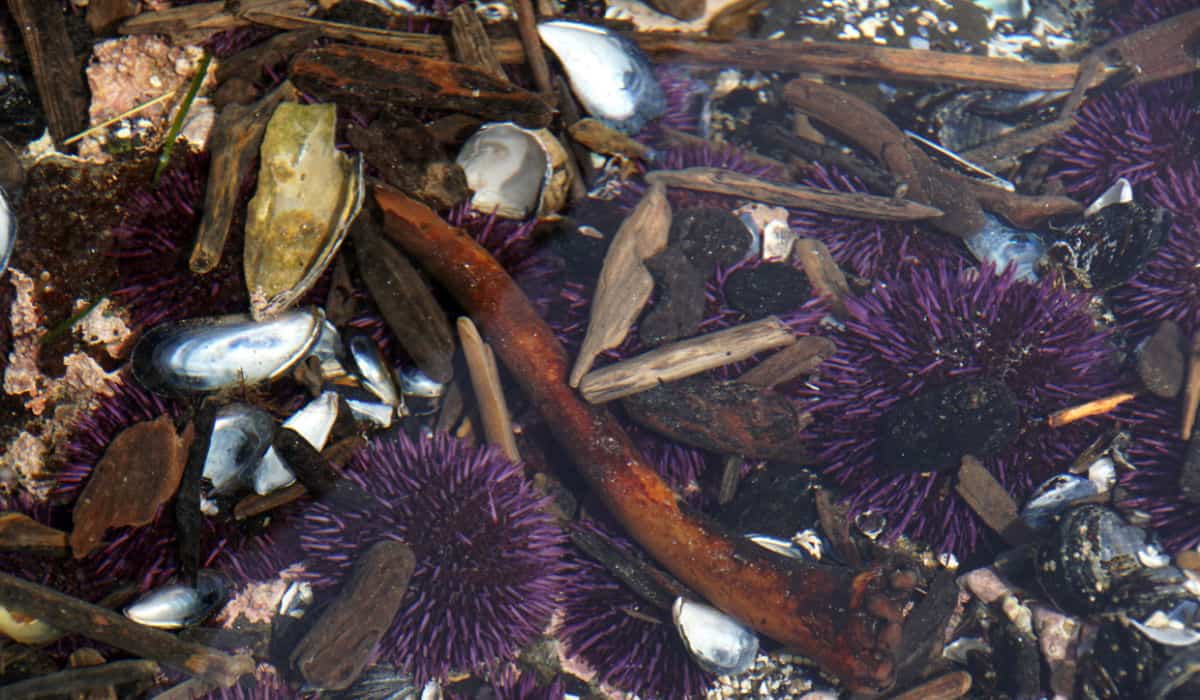 Last season, I went with some friends to T-Mobile Park in Seattle to watch a Mariners game. They decided to get some food while I went over to go grab the seats.

They came back with one of the small containers of chili-lime toasted grasshoppers they sell in Edgar’s Cantina in section 212. We tried them and they were surprisingly delicious.

A week or so later, we went to one of the beaches on the Oregon coast and after I brought up the grasshoppers, one of my friends wondered aloud if there was anything nearby we could eat.

I had been curious myself earlier that week, so I made some calls to other friends who knew more than me about beach foraging in case it came up. I came up with ten edible things you can find on the beach in the Pacific Northwest.

Before I begin, I should point out that you will likely need a state permit for most of the creatures listed here. It’s best to check the state’s website to see permit requirements, how many you can take per day, and which locations are legal.

Commonly called “bull kelp” or “ribbon kelp,” nereocystis is very common throughout the entire Pacific Northwest and can be found from Alaska to California.

The name comes from the Greek for “mermaid’s bladder,” which makes it sound less appetizing to me but it’s pretty good. The bulbs, stems, and leaves are all edible, with pickled bulbs and stems being the most common uses. They can also be used to flavor soup.

When you’re out foraging, you’ll want to look for pieces that are smooth to the touch, while avoiding white spots or damaged edges. These are indicators that the kelp is too old to eat. You’ll want to process them within a day or two, as they go bad quickly.

You’ll want to peel the stock if you choose to take that as well but you can use the same utensil as you normally would for carrots or potatoes.

There are plenty of clams and other shellfish available on the beach as well. Clamming can be done rather easily, with only a a clam shovel and a bucket.

The razor clam is one of the most popular, as it is usually the type used in clam chowder. However, the Pacific Northwest has other varieties, including the massive Geoduck, which can weigh several pounds!

It is important to point out, however, that shellfish build up levels of a neurotoxin called paralytic shellfish toxin (PST), which can be deadly for humans.

You’ll want to check the website of the state you’re in to see if the beach has been tested recently. The toxin cannot be destroyed by heating or freezing so harvesting from safe areas is the best way to avoid eating contaminated shellfish.

When most people think of eating crab, they picture a king crab or a Dungeness. However, these mostly live in the deep ocean and are not likely to be found near the beach, although it is possible.

The purple and green shore crabs, however, are all over the place! They’re a bit smaller at just a few inches long for both species. These are very different than the European green crab which is known for being an awful invader and a destructive species.

As with all saltwater crabs, you can eat them raw if you’re desperate for a meal or you can take them home and cook them as you would a normal crab.

Purple laver is another type of edible seaweed that is commonly found on beaches throughout the Pacific Northwest.

It is dense in many vitamins and minerals, particularly Vitamin B12. A 2001 Japanese study revealed that lab mice with low B12 levels who were fed dried purple laver caused an increase back to normal levels.

There are a few side effects associated with consuming too much purple laver, however, including the presence of Vitamin K, an anticoagulant that can interfere with blood thinners. If you’re on warfarin or a similar medication, you should check with your doctor.

As a child, I stepped on a barnacle one time while walking barefoot on a beach and I’ve never forgiven the entire species for that event. That is part of the reason why I enjoy eating them so much.

There are two types of barnacles that are safe and commonly eaten by humans, the gooseneck and the acorn. Both are found in the Pacific Northwest, although I understand they may be easier to find in Oregon.

The gooseneck variety is considered one of the most popular and expensive seafood delicacies in the world.

Eating these barnacles has proven controversial in recent days, however, as there is a growing movement of people who believe the species’ population numbers are unsustainable with current harvest levels.

Unlike the names of some of the other items on this list, sea lettuce is pretty easy to understand. It’s found in saltwater (like most seas have) and it looks like lettuce. It’s simple; it tells the whole story.

It can be eaten either raw or cooked, although I wouldn’t recommend eating the stuff you find on the beach without at least rinsing it off, since it is found in saltwater.

Mussels are another common shellfish found on the beach that can be eaten. They also have high levels of vitamins and minerals, like some of the others that we’ve discussed.

Like other shellfish, of course, it’s important to be aware of paralytic shellfish poisoning. Mussels can also contain other toxic elements, which is why they are traditionally boiled in order to remove everything that possibly can be.

After eating the mussel (by which I, of course, mean the meat inside), you can keep the shells as decorations, art projects, jewelry, or many other things. You can also simply throw them away.

Despite its name, the California Sea Cucumber is not found only in California. It can be found from the Gulf of Alaska all the way down to Mexico. There are other sea cucumbers throughout the Pacific Northwest but this is the largest species.

Despite the name, they are not actually vegetables. They’re echinoderms, like sea urchins or starfish.

Eating them is known to thin the blood, however, so if you’re already on medication to do that, you should exercise caution and ask your doctor first.

Gumboot chitons, a type of mollusk, are the largest members of the chiton family, averaging about 13 inches. Most others are between two and three inches.

They were often eaten by the early Native Americans, whose subsistence lifestyle involved hunting, fishing, and gathering other edibles, including most (if not all) of the items on this list.

The final member of our list is the sea urchin, an echinoderm that looks like a pin cushion. Around here, you’ll see the purple variety most commonly, although you may find others.

They have a very interesting taste that has been described in a number of different ways, including buttery, salty, umami, and others. In order to truly find out what it tastes like, you’ll just have to try one sometime!

They do sting, although it’s more unpleasant than dangerous, so you’ll want to wear gloves and handle them carefully while you’re harvesting.

This is not an exhaustive list and I don’t think it ever could be because marine life can be very unpredictable.

New species can be introduced into areas outside of their native habitats, so you might find a water jellyfish (which is safe) in a place where the others of the species are not edible.

Are All Types of Seaweed Edible?

Most, but not all, species of seaweed can be eaten safely. The saltwater varieties are completely safe for the most part but the type found in freshwater can be poisonous.

Yes! Most starfish (or sea stars, as they’re starting to be known since they’re not actually fish) are perfectly safe for human consumption. They don’t have brains or blood which means they’re mostly meat.

Yes, they’re very commonly eaten in many parts of the world. Despite the name, they aren’t actually insects. They’re more closely related to earthworms. The most common cooking method is to fry them in butter.

Is Pollution an Issue When Eating Seafood?

It can be, yes. This is why I recommend foraging on less popular beaches, farther away from commercial activities. Some of these hazards can be boiled out but others, like paralytic shellfish toxin, cannot be.

Yes, octopus is a common delicacy, and the Giant Pacific Octopus, found all throughout the Pacific Northwest, is no exception.

Restaurants mainly serve the tentacles but there are many other edible portions. Fried octopus eyes, for example, are considered particularly good.

They can be a bit hard to catch on or near the shore, however, which is why I didn’t include them on this list.

These are just ten of the many edible things you can find or catch on the beaches of the beautiful Pacific Northwest.

You’ll want to make sure to take all safety precautions, including wearing gloves, avoiding shellfish if you’re allergic to it, and making sure the food you get is cleaned properly before eating in order to avoid anything dangerous.

For some of these creatures, you’ll need a permit from the state, particularly the shellfish. You should also check the Department of Fish and Game or Fish and Wildlife’s website to see current restrictions and make sure the shellfish have been tested.

It’s also important to be a good steward of the natural habitats you’re visiting by not taking more than you need, leaving trash behind, or doing anything else that might cause excessive damage to the environment.

Whether you’re coming to forage or just to lay down in the sun in one of our many matches, the Pacific Northwest can’t wait to welcome you on your next adventure!