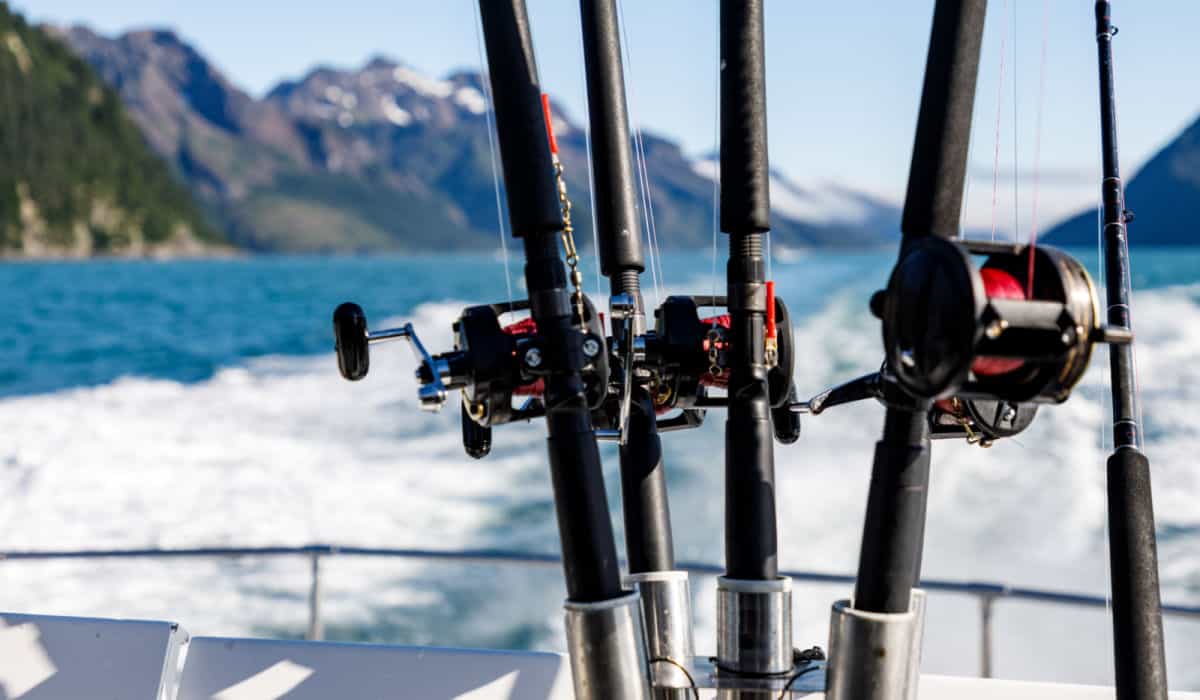 If you’re looking to go on a fishing trip, Southeast Alaska is the place to be. It is one of the most popular fishing destinations in the United States.

There are many popular fishing locations all over Southeast but how do you decide which one to pick? Every local who fishes regularly has their own particular favorite spot.

I highly recommend a fishing charter, where an experienced local guide takes you out on a boat, gives you all the materials you’ll need, and will help you reel in the big one if needed.

If you don’t like the idea of paying for a charter and you’d rather just rent a boat on your own, that’s totally fine, too.

Either way, you’ll have to decide if you’re after halibut or salmon (or if you don’t care at all and you’re just out for fish in general). Most places offer both freshwater and saltwater fish, but if you have a preference, you can let your charter captain know.

Anyone above the age of 16 who fishes in Alaska is required to get a license from the state’s Department of Fish and Game. Alaska residents can get a license for $20 that lasts the entire season.

However, the biggest decision you’ll have to make is which town you’ll be fishing in or near.

Almost every town in Southeast Alaska is a good choice, but I’m going to focus on the three best ones, based on what I’ve heard and seen as an Alaskan.

Pelican is an amazing small town, with a population of 98 people according to the 2020 Census. It is only accessible by float plane or by boat.

It is inside Lisianski Inlet, in a narrow fjord created by the movement of glaciers. It was specifically founded as a fishing town and offers both halibut and king salmon.

The city is served by a boardwalk that goes from one end of the town to the other. Most residents drive ATVs, so watch out for traffic while you’re walking.

The city’s motto is “Closest to the Fish” for a good reason. Every time I’ve been to Pelican, the first thing I see when I get off the float plane is someone holding up a 75-pound halibut.

If you’re considering an overnight trip or one that lasts several days, there are several fishing lodges in town that offer package deals for fishing excursions and a room for the night.

If you’re only interested in going out on a fishing excursion (which is fair, as Pelican offers very little in the way of amenities) Alaska Seaplanes has three or more flights per day in the summer between Juneau and Pelican.

Gustavus is another excellent choice for fishing in Southeast Alaska. It lies at the entrance of Glacier Bay National Park, a UNESCO World Heritage Site.

It has a population of 655 people, some of whom are descendants or relatives of the original family that homesteaded the island over 100 years ago.

Before that, the area had been used for centuries by the Tlingit people, who fished in the waters, gathered berries, and hunted on the island.

Getting a charter is definitely recommended here, as the park occasionally has restricted access. Either way, a fair bit of planning will be required for fishing here, although it is definitely worth it.

Just like Pelican, Glacier Bay offers both saltwater and freshwater fish. The saltwater offers delicious halibut (my personal favorite type of fish!), while the freshwater options include Chinook and coho salmon, steelhead and cutthroat trout, and Dolly Varden.

Alaska Seaplanes flies to Gustavus five times a day in the summer, making it perfect for a day trip or an overnight stay in one of the many lodges.

Craig is the largest city on Prince of Wales Island, which is the third-largest island in the United States. It has a population of just over 1,000.

Prince of Wales in general is an amazing fishing location, because of all the salmon runs that take place around the island (including the infamous humpy salmon)

I specifically chose Craig because it is on the western portion of the island and therefore gives you the first chance to catch the fish before they swim to the other side.

For those who would prefer to fish on land instead of a boat, Craig is also a great option because there is plenty of fish that swim in rivers and streams throughout the island.

Most of these locations are along logging roads, which are generally (but not always) maintained relatively well.

The two main ways of getting to Craig both originate in Ketchikan: flying from Ketchikan Seaplane Base or taking the Inter-Island Ferry Authority to Hollis, on the eastern side of the island.

Now that we’ve covered the three best places (in my opinion, at least) for fishing in Southeast Alaska, I’ll close by giving a few tips and reminders.

First, if you’re going on a charter, check with them to see if the fishing license is included. It generally is, but it’s worth checking first so that you don’t frantically have to purchase one online while you’re on your way to the boat.

Second, know the catch limits for the type of fish you’re looking for. Current regulations only allow sport fishers to keep two halibut per day and if the fish are below a certain size, you have to throw them back in.

If you’re after a specific type of Alaskan salmon you’ll want to make sure you’ll be fishing in the right place at the right time of year.

For king salmon, it’s only one per day and non-residents are only allowed to take home a total of three in a calendar year.

These limits are subject to change and it’s best to check NOAA’s website for the current guidance. Southeast Alaska is included in area 2C for regulation purposes.

Lastly, have a great time! No matter where you choose to fish in Southeast Alaska, you’re in for a treat. We have some of the best fishing available in the world and we’re always happy to share it with others.