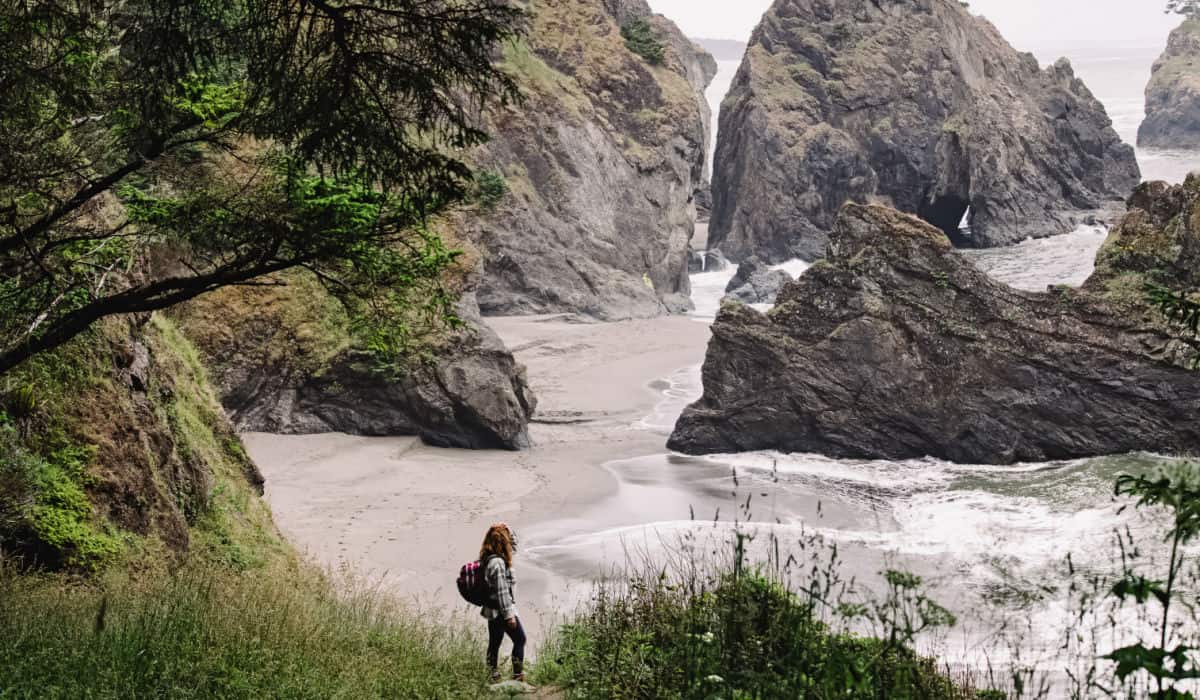 A couple of months ago, my old college roommate called me and said that he was going to be in Bend, Oregon, for a few weeks for work and he wanted to see if I could drive down to have dinner with him when he got into town.

I drove down from Portland to meet him and he asked if we could go to his favorite restaurant, so I took over to the Taco Bell on 3rd Street. In fairness, there isn’t a Taco Bell in Ketchikan, Alaska where he lives, so he likes to go as often as he can.

While we were out driving around afterward, he told me that his girlfriend took a week off of work and would be there in a few days.

She’s a big hiking enthusiast (which he isn’t, but he loves her enough to go anyway!) and he knew that she would want to visit some trails along the coast during their visit.

He asked if I knew of any trails and, lucky for him, I’ve done a fair bit of hiking down here, so I was able to give him a few suggestions. Here are some of my favorite hiking trails along the southern Oregon Coast.

Cape Blanco is actually a National Park (and the westernmost point in the continental United States!) that hosts several hiking trails, so I group them all together as one as I usually do at least three or four of them when I go out with my friends.

There are eight primary hiking trails and a ninth that runs for seven miles and allows horseback riding. Hikers often use this trail as well and, as long as you exercise caution, it can be a great walk.

One of the hiking paths leads out to the long-decommissioned Cape Blanco Lighthouse, which can be toured for a very small fee. The lighthouse was built in 1870 and is the oldest lighthouse of Oregon as well as the 2nd most western point of the continental United States!

There are several ways to get to Blacklock Point on a hike, but I’ve always been partial to the trail from Boice Cope Trailhead at Floras Lake as it has some of the best scenery I’ve ever encountered on the Oregon Coast.

There are many beautiful sea stacks and rocks that can be found at Blacklock Point, but I think birdwatching is actually my favorite activity here. I always try to bring a pair of binoculars while I’m out here.

The trail isn’t very well marked, so you’ll want to look up the route before you go. You’ll also want to avoid the beach area during high tide.

Cape Sebastian Trail is a rather moderate hike of only 3.3 miles each way, but it’s still one of my favorites. Part of that may be because Sebastien was my name in French class back in high school, but it’s still a great hike!

There are some tremendous cliffs and ocean views to be had here and it’s definitely more popular on the weekends, so if you time it right and go on a weekday afternoon, you and your party might have the whole trail and beach to yourself.

There is a rope that you’ll have to use to get to the beach and it’s not in the best condition (or at least, it wasn’t the last time I went out), so you’ll want to exercise caution.

The Oregon Coast Trail is one our list of the most iconic hikes of the PNW and runs the entire length of Oregon north to south. The full trail runs over 400 miles and, despite living in Portland, I much prefer the southern half of the route.

Specifically, the Port Orford to Bandon part of the trail is my favorite, because it’s rather remote and not often traveled. The last time I went out there, I hiked for about six or seven hours and didn’t see another person.

In all, I consider the southern portion of the trail to be roughly Brookings to roughly the Florence area, which is a little over 150 miles. The northern part is also good, don’t get me wrong, I just think the southern part is more what people imagine when they fantasize about the PNW.

The Samuel H. Boardman State Scenic Corridor near Brookings is another amazing location, named for the gentleman who served as the first Oregon State Parks Superintendent. There’s been talk of it becoming a National Park, but that hasn’t happened yet.

There are 18 miles worth of main trails here, but there are also many side paths that lead to secluded beaches and other amazing sights. There are also many rock formations here, including the seven arch rocks and blowholes that make up Natural Bridges.

In the springtime and the fall, this is an excellent spot for whale watching, particularly at the Cape Ferrelo Viewpoint.

I love the Kentucky Falls Trail because, as the name suggests, it ends with a view of a waterfall. I’m a huge waterfall guy, so any hike that lets me take pictures of one gets an automatic five stars from me.

The trail down to the Lower Kentucky Falls viewing platform is about 2.2 miles and is downhill on the way out, making the uphill return journey quite a bit more strenuous.

If you’re up for a bit of an extra (and extra strenuous!) hike, you can take the roughly three-mile out-and-back North Fork Smith Trail near the viewing platform. It’s a much more difficult hike due to fallen trees and uneven ground, however.

Just outside Brookings, Oregon lies the mouth of the Winchuck River and a fabulous 3.3-mile hiking trail along the North Beach.

Some of the best tide pools you’ll ever see can be found here, in addition to rock formations, marine life, and some amazing scenery. You can see the Pacific Ocean and the Winchuck River on this trail, which is considered a moderate hike.

There are also many old-growth trees near the river, including the coastal Redwood, which according to a sign at one of the nearby parks, can reach over 250 feet tall and has enough wood to build eight two-bedroom houses!

Of course, I’ve saved one of my absolute favorites for last, the Hobbit Trail near Florence. It’s an incredibly beautiful trail even if you aren’t a massive J.R.R. Tolkien fan like I am.

Do you remember the Forest of Mirkwood from either The Hobbit book or the second film in the Peter Jackson trilogy, The Desolation of Smaug? The trail looks like that, except without the profound evil of Dol Guldur. It’s really quite pleasant!

The actual Hobbit Trail itself is only about 0.5 miles down to the beach, but the China Creek Trail Loop is about four miles from start to finish. I like to do both while I’m nearby.

There are many hikes available along the southern Oregon Coast, including beaches, hiking trails, bike trails, horseback riding trails, and more, but these are just a few of the best that I’ve been on.

I should like to point out, however, the importance of keeping safety tips in mind when hiking. If you’re camping in the woods and near water, you’ll want to be particularly mindful of black bears (Oregon has no grizzlies).

You’ll also want to make sure you’re prepared with enough water and food, as many of these trails do not have potable water available.

Finally, I know this goes without saying, but I’ll say it anyway: please respect the pristine nature of the environment out here. I’ve always been a believer in the “Leave No Trace” philosophy that keeps nature looking beautiful and untouched.

No matter which trail you choose, you’ll be guaranteed to see some of the most beautiful scenery and amazing sights that the pristine wilderness of the Pacific Northwest has to offer!

Whether you just want to go hiking for a few hours or if you’re bringing the tent for an extended journey, the southern Oregon Coast can’t wait to welcome you on your next exciting hiking adventure!