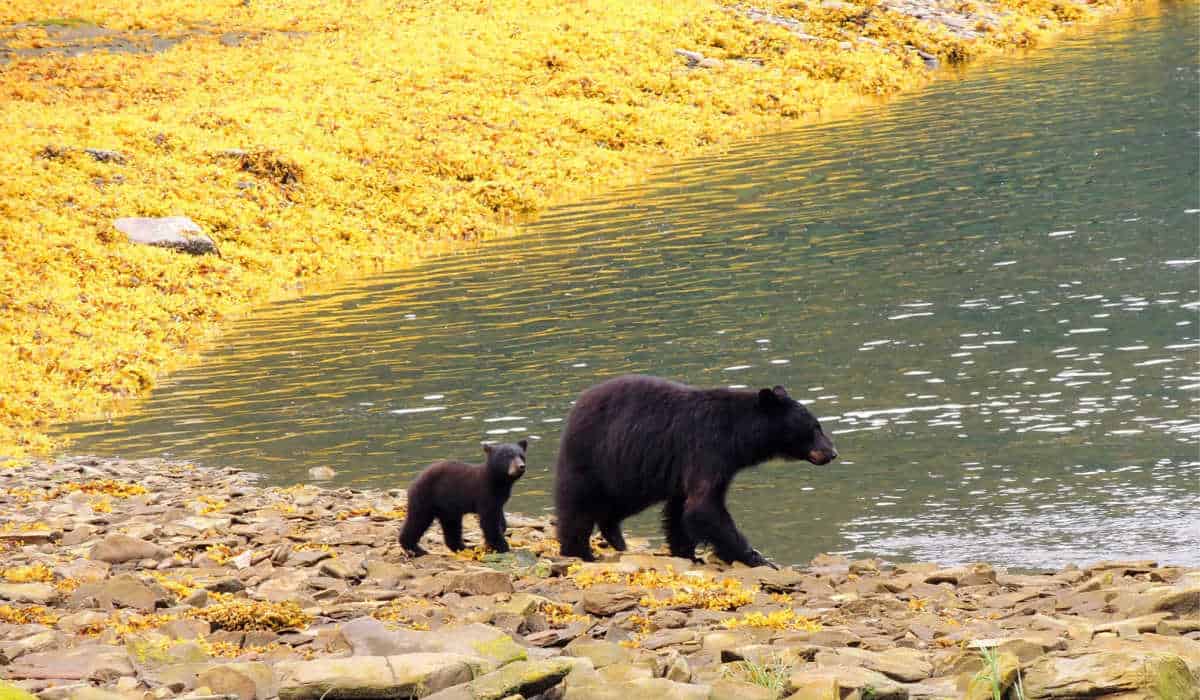 Have you ever seen a bear in person? If you haven’t, or if you want to see one again (at a safe distance!), Ketchikan, Alaska is a great place to go!

In Ketchikan, you’ll mostly see black bears, although if you’re lucky, you may get a chance to see brown bears (also known as grizzlies, although most Alaskans refer to them by their colors).

I’m going to make a list of the best places in and around town to see some bears, as well as the best times to do so. Then I will end by going over a few bear safety tips that you should keep in mind.

Some of this you may already know or it might seem obvious to you, but I’ve always been a “safety first” guy, so I’m going to err on the side of caution.

It makes sense that a place named after a type of fish would be a natural habitat for bears since fish make up a good part of a bear’s diet.

Herring Cove is first on this list because it’s the only one near town that you can access by car. All the rest require booking a tour and taking a boat or a helicopter, but I’ll get into that later.

It’s about 20 minutes south of town, so you’ll need to rent a car, get a cab, or join a tour group.

This is an amazing place to see bears in their natural environment. They can often be seen fishing in the water or just walking around.

Unfortunately, Herring Cove is the one place on this list where seeing a bear is not guaranteed. However, your chances will be incredibly high if you show up at the right time.

The best time to see them is around low tide, usually plus or minus one hour. That’s when they go into the water to get food. You can look up the tide schedule online before you go on your trip if you aren’t going with a group.

Traitor’s Cove is near a bay on the western side of the island, which was named by Captain Vancouver of the Royal Navy.

His diary just says that there was “some trouble” there with some of the local Tlingits, but doesn’t elaborate. People often debate whether or not the name is cool, but I’ll let you form your own opinions.

Alaska Shore Excursions runs a few different tour operations in Ketchikan, but this is probably the one for which they’re most well-known.

It is a one-hour boat ride (each way) from the cruise ship docks and you’ll need to pay for an excursion in order to get out there. It’ll be between four and five hours, though, which might not give you enough time to do whatever else you want to do in port.

This also gives you the chance to see whales and other marine wildlife on your way out to the cove, which might give you a closer view than you’d get on the cruise ship.

That being said, it’s roughly $400 per person, so you may decide that you want a cheaper option (which is why I led with Herring Cove).

Strictly speaking, Anan Bear Observatory is closer to Wrangell than it is to Ketchikan but since you can get an excursion there from the Ketchikan cruise ship docks, I’m including it here anyway.

If you’re getting a little tired of boats while on this cruise and would prefer to fly to your destination, Carlin Air will take you to the Anan Bear Observatory (or, if you wish, to our previous destination, Traitor’s Cove).

Anan features many bears in their natural habitats, including the brown bears which are significantly more rare at the previous locations.

Carlin Air’s excursion involves a 40-minute float plane ride in which direction, plus 90 minutes for viewing, plus a few minutes to speak with the Forest Service employees on duty about the site.

Just like our previous option, the Anan tour also runs for about four hours, so you’ll want to make sure you have enough time in port to complete the rest of your itinerary as well.

Other Locations and Bear Safety

There are a few other options as well, including a couple of helicopter tours that fly over bear habitats, but those are even more expensive than the options we have here and some take even more time.

One place you might unexpectedly encounter a bear is on hiking trails. I haven’t run into any in Ketchikan, but I’ve seen bears quite a few times over by the Mendenhall Glacier in Juneau.

That’s why I want to share a few bear safety tips for those of you who choose to go to Herring Cove outside of a tour group.

First, if a bear makes eye contact make yourself look big and make a lot of noise. Bears will usually back down if they think they’re in for a fight.

Second, don’t smell like food. Don’t bring any food with you when bears might be nearby, either, because they have a great sense of smell.

Third, don’t use your camera’s flash or do anything to startle the bear. Don’t throw anything at it to get its attention so it’ll pose for you, as obvious as that might sound. I know a very lucky guy who survived that encounter.

Lastly, don’t be caught between a mother bear and her cubs. Just like a human mother, a mother bear will do anything to protect her children and you don’t want to be on the other side of that.

The last thing I’ll throw in here is that there’s a big debate among many Alaskans as to whether or not bear spray is worth it.

I’ve never had to use it, so I have no clue, but some carry it in their cars and bring it with them on hikes while others insist it just upsets the bear and makes it more likely to charge.

I don’t know which side is right, but be prepared to hear locals discuss it if you mention seeing a bear on your trip.

Which Place is Best?

If it were me, I would call a cab or get an excursion out to Herring Cove. Around low tide, you’re almost (but not quite) guaranteed to see a bear, since it’s so close to the fish hatchery.

You should choose the one that best fits your needs, though, not just the cheapest option that I would take.

No matter where you choose to see a bear, I know you’ll have a wonderful time, as long as you mind the safety tips. We can’t wait to see you here soon for your next bear-watching adventure!