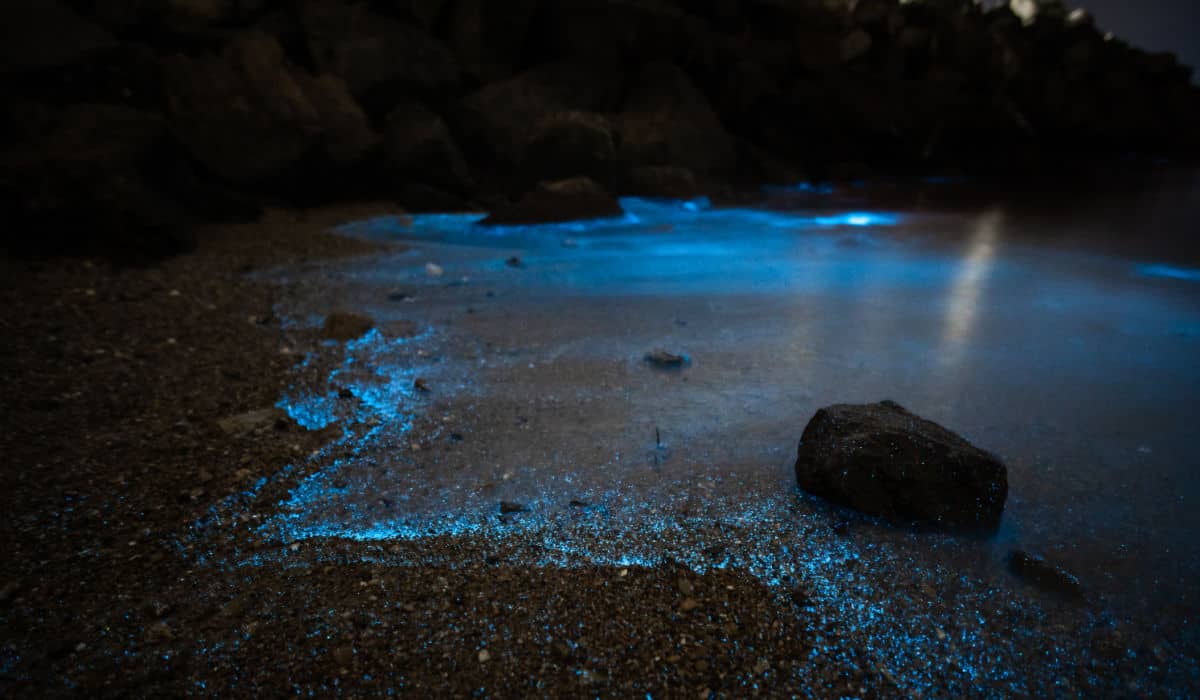 Despite living for half of her life in Bellingham my wife had never heard of Teddy Bear Cove.

There are a couple of places in Washington to see bioluminescent events so it was a bit of a shock to her to find out about one so close to home.

However, like most places, seeing bioluminescence at Teddy Bear Cove isn’t something that you can do on just any night of the year.

You have to be watching and waiting for just the right circumstances if you want to be successful. At times, even an hour difference can make the difference between seeing nothing but dark water and having every rock you throw set off a cascade of light.

So when can you see it? And what should you be looking for?

Well, since we’ve been successful at seeing in a couple of times a year since our kids were little I hope we can help answer both of those questions.

But first, let’s set up some background so you know exactly why you’ll need to wait for a specific time.

The Bioluminescence Of Teddy Bear Cove

In short, bioluminescence is the production and emission of light by an organism. This light is usually cold to the touch and can be either blue, green, or red in color. In many cases, the light is used as a means of communication (as with fireflies) or to attract mates (as with certain deep-sea fish).

However, the bioluminescent plankton found in Teddy Bear Cove (Noctiluca) produces light as a means of self-defense. This is known as “startle response luminescence”.

The cove is a perfect place to see this plankton as the teddy bear-shaped rock formations that ring the cove and give it its name also provide protection for the water, typically leaving them quite calm.

There are a few things that create the perfect setup for seeing the glow at Teddy Bear Cove. You don’t have to wait for the planets to align, but, the more of these that you can check off the better your chances are.

Well, night, really. The darker the night you go the more spectacular things will be. We usually are at the cove around 1:00 in the morning, depending on when the moonrise is.

On one of our best trips, there was another family leaving when we arrived. They said that they had seen absolutely nothing. Well, the moon was shining bright so we weren’t surprised. By the time we got down to the beach, the moon was no longer shining on the water and we had an amazing time.

Time Of The Month

As you might have guessed, visiting during a new moon will give you the darkest skies. The darker it is the more effective the “startle effect” of the bioluminescence is for the plankton and the more likely you are to see it.

Time Of The Year

The glowing plankton are pretty much always in the bay but are just not present in sufficient numbers to see.

They require warm weather (and warm water) to proliferate at the rate that is needed to light up the water.

This means that the later in the summer you can go the more likely you’ll be to have a successful trip. Late July and August are typically the best months but you might have luck earlier if we’ve had a particularly warm spell.

If it’s windy and the water or too brought you’re unlikely to see any bioluminescence. You’ll want to find a spot where the waves are gentle as this is typically where the plankton collects.

Walk along the beach and look for calm spots around rocks etc. and toss in pebbles. If it’s worth it to you to brave the chilly waters you can water into the water and potentially create a massive cascade of light around your body.

However, we make sure that the conditions are perfect and that the plankton is responding to some small splashes before we’re willing to go to that length.

Just remember that, while it’s cool, making the plankton light up is akin to tapping on the glass of an aquarium or terrarium. You’re disturbing creatures to try and make them more interesting. So take care not to disturb the delicate ecosystem too much—after all, we want these magical creatures to stick around for years to come!

Getting To Teddy Bear Cove

Teddy Bear Cove sits on Bellingham Bay but is small and rocky enough that it’s not known for much beyond the luminescence.

However, you will be able to find a marked parking place and signs so getting lost isn’t much of a worry.

There is a small parking lot at the trailhead, or you can park on the street. The parking can get particularly crowded on dark nights so you might want to get there early and bring some camp chairs if you’re worried about having a spot.

The trail to Teddy Bear Cove is well-marked and easy to follow. However, it winds through a dense forest of Douglas fir and Western red cedars which blot out pretty much all light. You’ll want to bring a flashlight of some sort to make the trip a bit easier. Just make sure to turn it off at the beach if you don’t want people to be mad at you.

The trail ends at a rocky beach where you can make your way to the water’s edge and start plankton hunting!

Other Places In Washington To See The Glow

If you’ve struck out at Teddy Bear Cove (or don’t want to walk the trail at night) there are a couple of other places in the area where you can see the bioluminescence.

The easiest to access is Taylor Dock where you can simply walk out and disturb the water.

The Boardwalk at Boulevard Park is another easy opinion. Just grab a couple of small rocks from the railroad tracks and drop them into the water. If you’re lucky you might see someone jump off the boardwalk or swim by, creating huge swathes of light.

I will say, however, that Teddy Bear Cove is the only place we’ve had much luck. I only know of the others through hearsay and haven’t ever seen bioluminescence there. Although we haven’t put nearly the same effort into other locations.

There’s nothing quite like seeing bioluminescence in person. If you ever have the chance, we highly recommend it.

And, if you find yourself in Bellingham during late spring or summer, definitely make your way down to Teddy Bear Cove for an unforgettable experience!