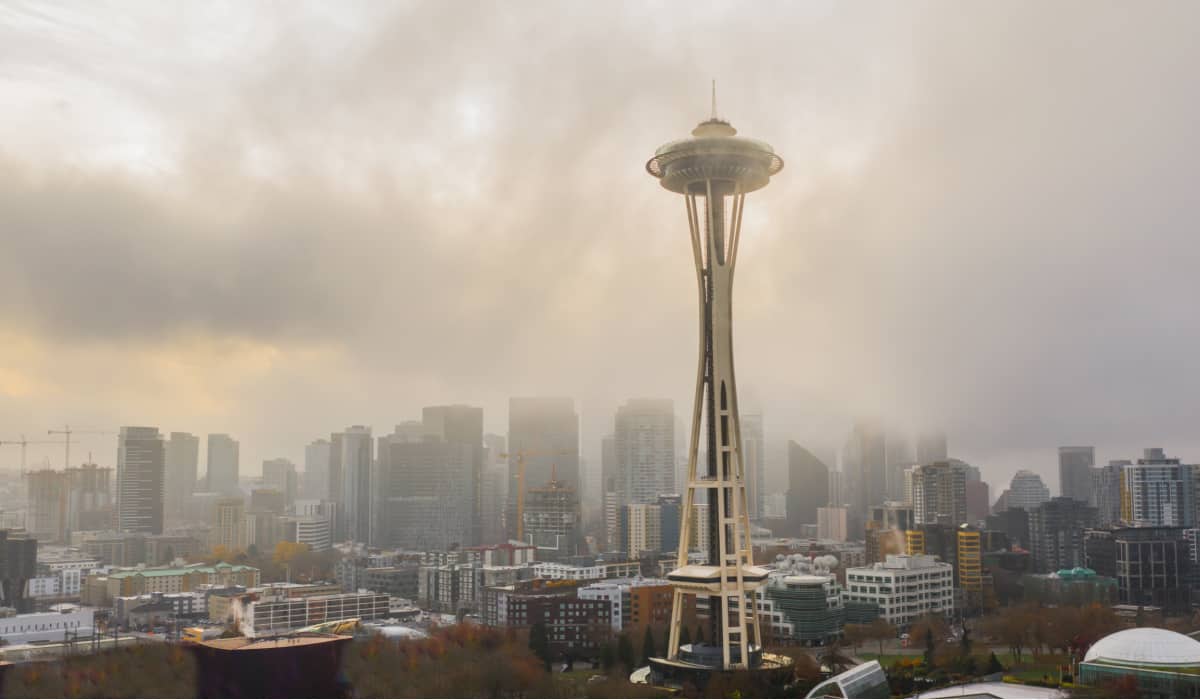 If there’s one thing everyone knows, it’s that it rains constantly in Seattle. That and the fact that Seattle-ites love their coffee.

However, just because “everybody knows something” doesn’t make it anywhere near true. Despite many people considering Seattle to be one of the wettest cities on the west coast, its level of raininess is constantly exaggerated.

While Seattle ranks highly for the number of rainy days annually (ranked #6 with 150 average rainy days), it ranks receives less than half the average rainfall of the 10 rainiest cities’ annual inches of rain.

On an average year, Seattle has 822 hours during which there is measurable rain. So it rains in Seattle roughly 9.4% of the time.

Gray and cloudy weather without rain is another story.

Does It Actually Rain A Lot In Seattle?

The truth is that Seattle has a lot of rainy days. In fact, Seattle typically has around 150 rainy days per year, beating out other major PNW cities such as Portland. However, very rarely is the amount of rain actually significant as the “150-days-number” measures every day that receives more than .01″ in precipitation.

While other areas of the country (such as my original hometown in Utah) get most of their annual rainfall through sporadic ground-soaking deluges. Such storms are very rare in Seattle and much of the pacific northwest.

Instead, you’ll get a constant greenhouse level misting that will ruin your hair, make the streets slick and muddy, and rob your body of the chance to produce any Vitamin D.

Most locals carry (or wear) a rain shell every time they go out as there is nearly a 50% chance you’ll get caught in at least some level of rain and no one wants to show up to work slightly soggy.

If you’re planning a trip, odds are you make sure to check out the weather at your destination.

When we recently took a trip to Orland, Florida we decided to compare it with Seattle’s annual 37 inches of rainfall to get an idea of what to expect. It turns out that Orlando is #6 on the list of cities that receive the most rain and gets an average of 51.5″ per year!

Check out how Seattle’s paltry 37″ stacks up to the top ten, I’m sure you’ll find some surprises here:

If we’re talking about the contiguous U.S. (excluding the crazy rainy city in Hawaii and Alaska) then the average rainfall on a U.S. city is 30.21″, less than 20% less than our beloved rain-soaked Seattle.

However, just because Seatle isn’t the rain-soaked city that people seem to think doesn’t mean that there isn’t a lot of rain in Washington.

The iconic vegetation that the Pacific Northwest is known for is only possible because of rainfall. These areas and cities are typically not well-represented on lists of “Rainiest Cities” as they are below the population cut-off of the studies (typically 50,000 residents).

If we throw Alaska and Hawaii aside again, one of the wettest places in the United States is actually Forks, Washington (setting of the Twilight books). Forks averages 119.9″ of precipitation per year with 206 rainy days.

There is also the confounding factor that the “rainiest cities” are typically warm cities that receive only rain. Most places in Washington don’t log inches of rainfall in the winter (as they get snow instead). Wetter areas in Washington and Oregon can get up to 167″ of water falling from the sky per year.

Is It Always Cloudy And Gray In Seattle?

Short answer, yes, yes it is.

Seattle is gray all winter as are most places. However, Seattle’s long gray winters tend to be very long and are the main contributor to the area’s lack of sunny days.

In fact, Seattle has an average of 152 sunny days per year, well short of the US average of 205 days.

With that being said, summers in Seattle can be glorious with blue skies, lots of sunny days, and not too much extreme heat.

It is the long gray winter, however, that has earned the greater Seattle area such a dismal reputation and contributed to all the Seattle-ites’ melancholy.

Is Seattle A Depressing Place To Live?

I love rain. I really do. However, it’s not rain that makes Seattle a depressing place to live. It’s the lack of sunshine that starts messing with your brain.

During the bleak winter months more than half of Seattle residents over the age of 18 self-reported that they were dealing with “feelings of depression” and had been “down, depressed, or hopeless” for at least a few days over the past week.

The same study (Household Pulse Survey) crowned Seattle as the Saddest Metro Area in the nation. Something to consider if you’re looking at spending much time in the Emerald City.

While Seattle has always been a gray and “dreary” place to live, I personally things that a confluence of issues (such as decreasing livability) is more to blame for the depression of Seattle’s residents than a bit of rain. Let’s face off against the rampant homelessness, drug problems, and lack of affordable housing and I’m betting people will feel better about dealing with the rain.

As we can see, there is some validity in the claim that Seattle is a rainy city. Just maybe not quite as rainy as you thought. Just more gray.

There’s a joke in Seattle that the “rainy rumors” were actually started by Washingtonians themselves to dissuade all the Texans and Californians from overrunning the state. Maybe it’s time to consider a new plan.