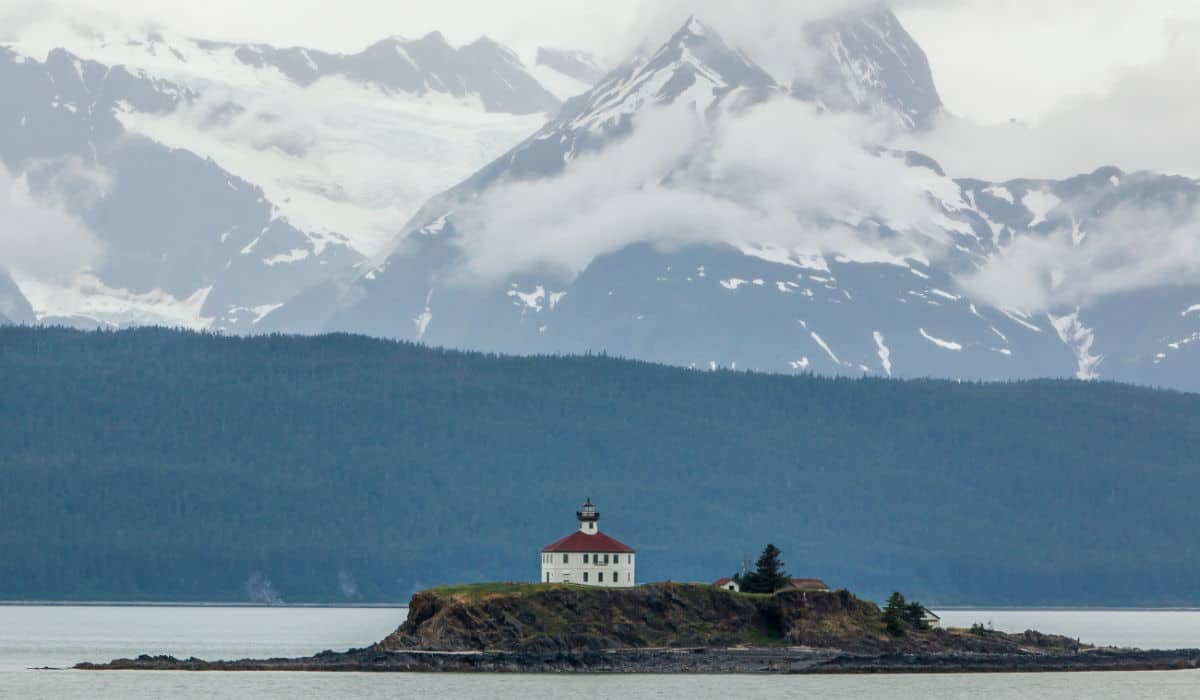 I went over to Safeway last week to get some protein powder and while I was there, I saw an old friend from high school who I probably haven’t seen in about five years, despite the fact that we live in the same city.

He was wearing a shirt with “Run 4 The Rock” and “Eldred Rock Light” written on it. I recognized that it was a shirt he got for running a race because my dad probably has 50 race shirts.

I asked him about it and he told me the Eldred Rock Lighthouse Preservation Association puts on an annual fundraiser to help maintain the site. I nodded, pretending to know what he was talking about, but I was too tired and wanted to go home.

When I got home, I called my dad and asked him if he knew anything about this lighthouse, which he did. He then told me the whole story, which is as follows:

The Building of the Lighthouse

On February 5th, 1898, a ship called The Clara Nevada sailed from Skagway with a number of passengers (some sources say 25 to 40, others say 20 to 60, I say probably somewhere in-between).

As the ship passed the island called Eldred Rock, the ship struck a large stone in the water and sank very quickly. There were no reported survivors, although the captain and another crew member were later revealed to have survived.

The 800 pounds of gold the ship carried was never found, either, which has led to many theories over the years about what might have happened to it.

Regardless of the actual events that transpired that night, in the wake of the tragedy, the US Congress decided to appropriate some funds to build some lighthouses in Southeast Alaska, in hopes of avoiding another similar event.

In total, 10 lighthouses were constructed in the area between 1902 and 1906, with Eldred Rock Light being the final one constructed. It is about 55 miles northwest of Juneau and about 35 miles southeast of Skagway.

History of the Lighthouse

After the plans for the lighthouse were approved in 1905 and they had hoped to finish construction before the harsh winter began, but the winter came early and it was not completed until July 1, 1906.

It was 56 feet tall and was equipped with a fourth-order Fresnel lens whose beam alternated between white and red lights.

The first Keeper of Eldred Rock Light was Nils Adamson, who was paid $1,000 per year to live on the island and operate the lighthouse. His two assistants were both named John, John Currie and John Silander, although Currie went by “Scottie” to avoid confusion.

Four years later, the two Johns went on a boat to visit another nearby lighthouse, the one at Point Sherman, after which they were never seen again and no one knows what happened to them.

In 1939, a radio beacon and a radio telephone were added to help the lighthouse workers in their duties. In 1966, a helicopter pad was added, which meant the operators no longer had to arrive by boat.

The 1973 Automation to the Present

The lighthouse operated manually for 67 years until the US Coast Guard made the decision to automate it in 1973 and downgrade it to a minor light.

The original Fresnel lens was removed and replaced with a battery-operated white light that flashes every six seconds. The old lens can now be seen in Haines, where it is on display at the Sheldon Museum and Cultural Center.

In 1988, the new light was converted to solar power. Two years later, the National Weather Service was authorized to build a weather station at the lighthouse site, which still operates to this day.

In 2016, the 250mm lantern that replaced the original Fresnel lens was replaced itself, this time by a VLB-44 LED lantern.

Several environmental studies were conducted in the early 2000s, which revealed that the site was built with and contaminated by asbestos.

In 1996, the United States Coast Guard instituted a new program designed to maintain and preserve their former lighthouses, including Eldred Rock, the only one of the ten constructed from 1902-1906 in Southeast Alaska that still stands.

This preservation would be handled by an outside agency, like a non-profit from a nearby community.

In June 2004, it was officially listed as an available property and the Sheldon Museum in Haines submitted a proposal to take over the upkeep of the site, but after a boundary dispute with the US Forest Service, the plan was shelved.

The Coast Guard maintained control of the site until 2020 when they signed a five-year lease with the Eldred Rock Lighthouse Preservation Association, with the option for three additional renewals of five years each.

This is the story of Eldred Rock, the oldest surviving lighthouse in Southeast Alaska, which was constructed in 1906, was operated manually for 67 years, and is now run automatically by solar power and batteries.

It was built after the Clara Nevada sank near the island under mysterious circumstances, which some believe may have been connected to an illegal shipment of dynamite they may have been carrying.

Although there are no tours of the actual lighthouse building or the island itself at this time, both the Alaska Marine Highway System ferries and many cruise ships pass by the island on their way through the Lynn Canal every year.

You can also take a charter boat from Haines or Skagway that will take you to the waters near the lighthouse and give you an up-close view of this amazing structure.

No matter which type of boat you’re on, you won’t want to miss this exciting opportunity to see this remarkable piece of history!