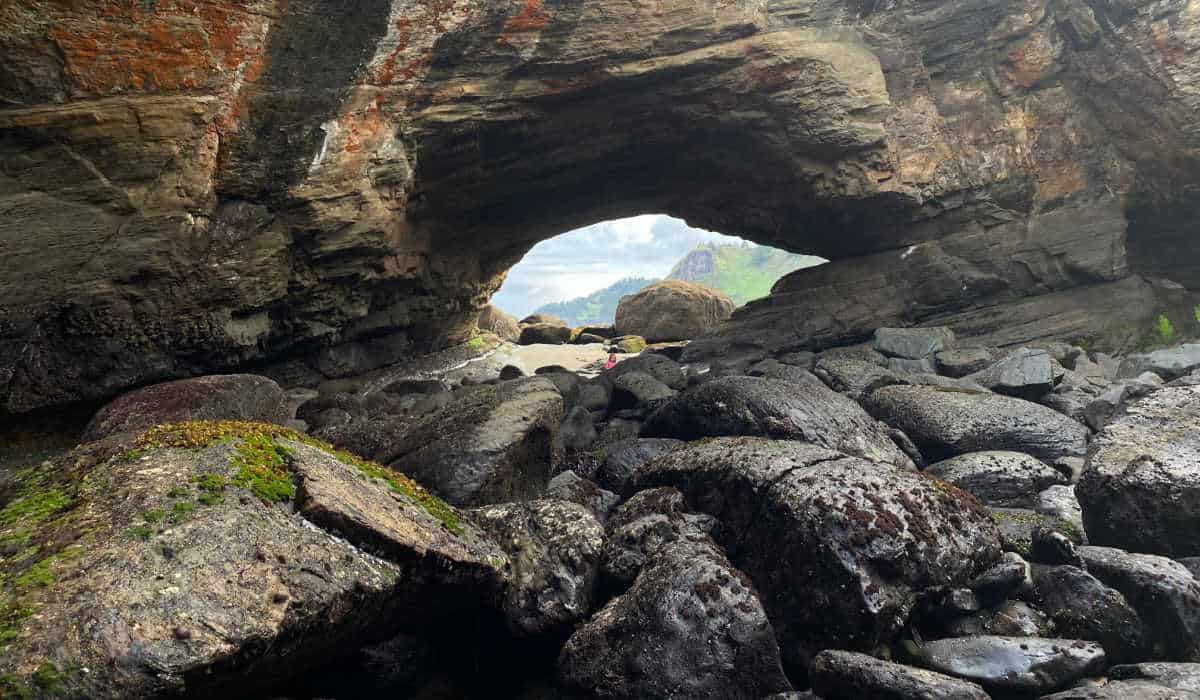 On our last trip to the Oregon Coast, we woke up at 4:30 a.m. to be at the Devil’s Punchbowl at low tide. We had never been there before, but figured we’d have enough time to figure out the directions we found online.

It turns out that 2 hours wasn’t enough time. We did make it to the bottom of the Punchbowl – but not before we ended up on the wrong beach, hiked down (and then back up) a big hill, and I slipped down a nasty sea rock and got covered in mud.

It turns out that it’s actually very easy and safe to get inside the Devil’s Punchbowl…if you know where to go.

Luckily an early-rising local lady took pity on us and we were able to figure out exactly where to go.

Even though visiting the bottom of the Devil’s Punchbowl is totally allowed, it does not have a dedicated trail and there are no official directions (I assume because Oregon doesn’t want to be liable).

So, in the interest of keeping everyone safe and helping you get in and out of the Punchbowl in a timely manner, here is exactly where you want to park and walk.

Step By Step Instructions To Get Into The Devil’s Punchbowl

First off, this is only accessible at low tide, period. Look up a tide schedule (easy to google) and find the times for the lowest tides.

Now, if you’ve never been to the Devil’s Punchbowl before, drive down to the viewpoint and get an idea of where you’ll be headed. You’ll be walking down the beach to your right and entering the bowl from the northern-most cave.

To help you visualize it, I drew this map. Just follow the purple. The red pin that I dropped is the trailhead down to the beach. Once you’re on the beach, getting into the Punchbowl is easy.

But let’s start from the beginning. It’s easy once you know where you’re going, but since we didn’t, it was pretty confusing.

1. Park In The North Parking Lot

There are three parking lots meant for viewing the Devil’s Punchbowl. If you simply use your phone to route to the Punchbowl, you’ll be taken to the viewing area.

However, as you’re driving down First Street to get to the viewing area, you’ll pass a parking lot on your right that has a bathroom in it. Don’t park here.

Instead, turn north on C Avenue. You’ll find the next parking lot just to the North at the junction of C Avenue and 2nd Street. Park anywhere, it’s free.

Continue walking down the dead-end road until you see a trail leaving the road to your left.

3. Take The Marine Gardens Trail (on your left) Down To The Beach

The trail here is washed out and no longer maintained, but it is still open. Someone has cut little steps into the washed-out sections so it’s still the safest and most direct way down to the beach (and the Punchbowl).

Once you’re on the beach you’ll want to head south. You’ll have a bluff on your left and the ocean on your right, so it’ll be pretty hard to get lost. Not to mention that depending on the time of day, there will probably be dozens of other people with the same destination in mind.

This is a nice beach with lots of tidepools, cool rocks, and sand, but you’ll want to keep moving. If there’s time after you visit the bottom of the Punchbowl, the beach is a much safer place to hang out as the tide comes in.

5. Approach The Punchbowl From The North

At this point, you can probably see the Devil’s Punchbowl. Getting inside of it really isn’t much of a trick.

It juts out from the mainland, so as long as you’re on the right beach and keep heading south, you’ll have nowhere to go but up a cliff, into the open ocean, or into the bowl entrance.

Depending on the water level, you might meet some dead ends on your way as you scramble over rocks, run into little rivers, etc. Just be sure to leave yourself time to navigate the 1/4 mile or so down the beach.

What You’ll Find In The Devil’s Punchbowl

Now that you’re here, what should you expect to find? If you’re imagining fabulous treasure, don’t. The main draw is an incredible photo-op and the chance to stand somewhere that is normally being pummeled by waves. However, that’s not to say that there aren’t some interesting things to be found.

The beach to the north of the Punchbowl is extremely rocky. This means that it’s great for gazing into tidepools and beachcombing.

There are very few tidepools inside the bowl itself, as it’s simply too rocky. The violent waves have driven out almost all of the sand and most signs of life. You might find a few starfish and crabs hanging around, but the majority of the tidepools and sea life are just outside of the entrance.

–> If you’re interested in tidepools, check out our Complete Guide To Oregon’s Tide Pools (it is, of course, a free article)

This area is incredibly rocky, and to make things more interesting, most of the rocks have about as much traction as an oil slick.

Since you’ll be scrambling over and around rocks to get there, you’ll want to exercise lots of caution. Not only do falls hurt but the rocks (and the creatures that live on them) are often sharp and can easily shred your skin.

While we were exploring the bottom of the Punchbowl, I mentioned to someone that we had trouble finding our way down. He mentioned that someone else had gone around the railing in the viewing area and attempted to climb down. The rock is routinely covered in ocean spray and is covered with a snot-like layer of sea vegetation. The guy who attempted to climb down slipped and ended up falling about 15 feet onto rocks. He was able to walk out but it could have been much worse. Exercise caution!

The pounding waves pick up and deposit some really incredible rocks into the punchbowl where they get trapped amongst the larger rocks and boulders.

When we were there, we saw several guys in full waterproof rubber suits literally crawling through the rocks trying to find agates.

We found several up to about almost an inch in diameter, so it’s more a matter of showing up and being persistent than having special gear or expertise.

Is The Devil’s Punchbowl Worth It?

In my opinion, yes, it is absolutely worth it to explore the bottom of the Devil’s Punchbowl.

Once you know where you’re going, it’s a fairly easy hike that shouldn’t take more than 30 minutes.

We managed the hike with our 3 and 5-year-old girls, and we feel like it should be doable for the majority of people.

Many people are scared of being down there because of all the warnings about the tide coming back in and getting trapped in the Punchbowl.

The truth is, the tide doesn’t really sneak back in. If you’ve checked a tide chart (which you’ll need to do to visit at low tide anyway) then you’ll have a good idea about how long you’ll have. We spent about two hours at low tide and had plenty of time for a leisurely walk out before the water was dangerously high.

Just keep an eye out for rogue waves, slippery rocks, and the tide, and you should manage the trip safely.

Once you’ve made it out of the bowl, be sure to go back and see it at high tide if you haven’t. It definitely adds an element of awe to see the waves and foam crashing around inside, knowing that you stood there earlier.

So good luck, have fun, and stay safe!