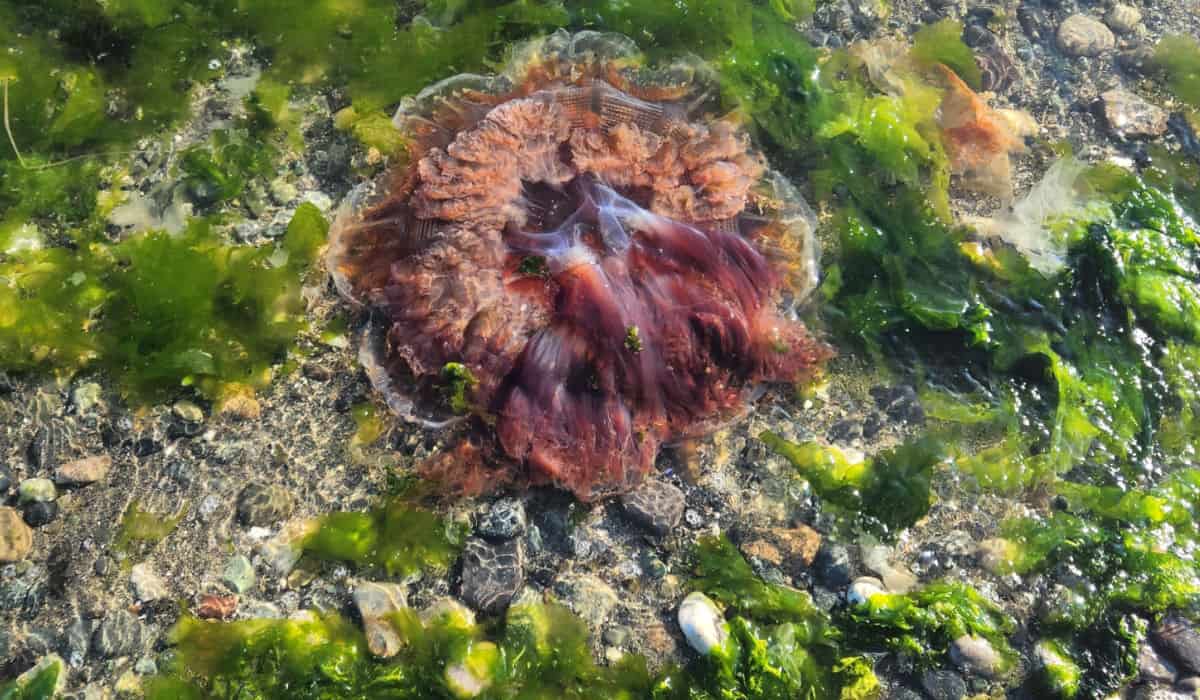 One of the most famous aspects of the Pacific Northwest is the wide variety of marine life that can be found in the nearby waters. Next to green trees and the band Nirvana, it might be the thing that people think of first when they think of the PNW.

People don’t often think about all the creatures, however. Whales, sea lions, salmon, and others are often the first ones that come to mind, but there’s another important one that is often overlooked: the jellyfish.

There are several different types of jellyfish in the Pacific Northwest. Let’s take a look at a few of the most common types and some basic facts you’ll want to know, like whether they or not they sting and if so, how bad the effects are.

What is a Jellyfish?

I realize that some of you will already know what a jellyfish is, but I also realize that many of you may be from landlocked states or countries that don’t have any and your only experience with one might be the King Jellyfish boss fight in the Spongebob video game.

A jellyfish is a gelatinous sea creature that is classified as an invertebrate because it has no backbone. They are 95% water in most cases and the rest is made up of structural proteins.

They are eaten as a delicacy in many cultures, particularly in China, although there are only 11 types safe for human consumption and none of them live in the Pacific Northwest.

In recent times, the term “jelly” has gained favor, since the “fish” part of the name is completely inaccurate and, other than the fact that both live in water, they have very little in common with fish.

7 Common Jellyfish of the Pacific Northwest

Aurelia aurita, also known as a moon jellyfish, is probably the most common or second-most common type of jelly in the Pacific Northwest. They’re the standard jellyfish that you’d most likely see in an aquarium.

An adult moon jelly is usually about eight to 16 inches, as measured along the medusa, the main part of their body that is often shaped like a bell.

They sting, but it is not powerful enough to break the skin. It isn’t even fatal to their predators; the sensation is just unpleasant enough for them to leave the moon jellies alone.

Cyanea capillata, also known as a lion’s mane, arctic red, or sea blubber jellyfish, is one of the largest species of jellyfish, although the ones in the Pacific Northwest are quite a bit smaller than their southern counterparts.

Up here, they can reach about two feet in diameter around the medusa. Closer to the equator, they can reach over six feet, and the largest specimen ever recorded had tentacles over 100 feet long!

They change color as they age, starting out with an orange-ish coloration, then becoming colorless as young adults before turning into a reddish color as adults which gradually darkens as they get older.

Lion’s Mane Jellys are one of the most common jellyfish sighted in the Puget Sound and many people are left wondering if their stings would make it unsafe to swim or even kayak.

In general, their stings are moderately painful and will leave a red area on the skin, although overall, they are not deadly.

A Sherlock Holmes story features a professor killed by a lion’s mane, but Holmes explains that a pre-existing heart condition caused the sting to be fatal.

Gonionemus vertens, or the clinging jellyfish, is the smallest type of jellyfish found in the Pacific Northwest, mainly in the Gulf of Alaska, the Inside Passage, and the Puget Sound Area of Washington.

They are usually only about an inch or so in diameter and, as their common name suggests, are often found clinging to seaweed.

They are almost entirely transparent, except for their reproductive organs which are a yellowish color in males and reddish-orange or brown for females.

Interestingly enough, the sting of the Atlantic Ocean or Asian clinging jelly can be deadly for humans as it can cause anaphylactic shock, but the Pacific Northwest version has a sting that does not affect humans at all.

Phacellophora camtschatica is transparent with a yellowish coloration in parts. It is commonly called the egg yolk or the fried egg jellyfish because of its appearance.

It is a fairly common species here and is usually about two feet in length. Its main diet consists of other jellyfish, unlike other species that mostly eat algae or crustaceans.

Curiously, it does not have dedicated respiratory or circulatory organs. It gets air from the water around it, which it diffuses using the thin membrane that covers its body. It also excretes waste through a similar process.

It has a very weak sting, so weak in fact that it has a symbiotic relationship with other small sea creatures. They will often ride on the egg yolk jelly’s back and share their food!

Aequorea victoria, also known as the crystal jellyfish, is another common species that is frequently found along the Pacific Coast from Alaska all the way down to southern California.

They are entirely transparent and are bioluminescent, which means they are able to produce light that gives them a glow. In this case, it is a blue light created when one releases calcium, which mixes with a photoprotein called aequorin.

They are usually about six or seven inches in length and have proven very useful to the scientific community, as much of what we know about bioluminescence has come from studying this species.

Their sting will cause the usual skin irritation but there is no associated pain. Many people do not even realize they have been stung until they leave the water and notice a red patch of skin.

Velella velella (a species so nice, they repeated its name!), also known as the sail, sea raft, or purple sail jellyfish, is a free-floating jellyfish that earned its common names because it is incapable of moving on its own.

They are blue and have a signature sail-like feature that allows them to be carried by the wind or tides. They usually appear to be about two or three inches in length, although each unit is actually a colony made up of multiple members.

Because they are unable to transport themselves, they are often found washed up on beaches, sometimes by the thousands. This is especially common in springtime.

Their sting is generally not harmful to humans, although some people may be allergic to the toxins they produce. It can cause painful itching, however, and it is not recommended to touch your hands or face after handling one.

Polyorchis penicillatus, also known as the red-eyed medusa, is actually a hydromedusa and not technically a true jellyfish. The main difference is that a hydromedusa produces its eggs under the bell but outside of the body, while a jellyfish does it internally.

Its common name comes from the red eyespots found at the base of its tentacles. It spends its days near the seafloor but rises to the surface after dark in search of prey.

It has a transparent body and white tentacles, as well as the aforementioned red spots. They are usually about two inches in length, which is small relative to some of the others on this list but they are the largest hydromedusa in the Pacific Northwest.

The red-eyed, like most hydromedusae, do not sting, although there are other species in the same genus that are found near Siberia that can send victims to the hospital.

These are the main types of jellyfish that can be found natively in the Pacific Northwest. It is possible but rare to find other species, although they are generally transplants from other habitats.

I chose not to include the comb jelly that is found in the Salish Sea, an arm of the Puget Sound because it is actually a ctenophore and not a jellyfish.

The jellyfish you’re likely to encounter might sting you or cause some irritation but will not be fatal, unless you have a rare allergy.

If you do get stung, remove any visible tentacles, soak the area in hot (but not scalding) water, and apply a topical cream with hydrocortisone. This should clear it up in just a few days.

If you enjoy jellyfish or other marine life, a vacation to the beautiful Pacific Northwest will give you the opportunity of a lifetime to see many different species.

If you’d rather see them from a distance outside of their natural habitats, there are many great public aquariums here where you can see them inside of a glass case.

We can’t wait to see you on your next visit!