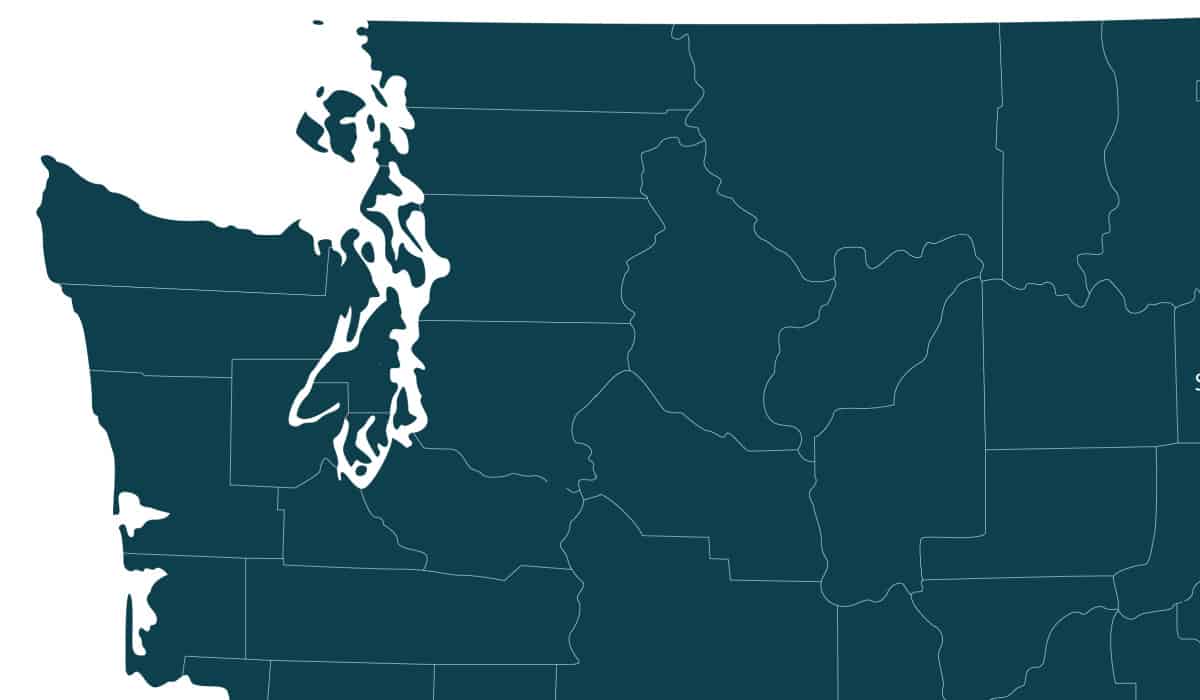 Whether you’re looking to get out of Seattle and experience nature, kayak with whales, or explore from Olympia your destination is the same: the Puget Sound.

The Puget Sound has been drawing paddlers in for (literally) hundreds of years.

These days this means that there are plenty of places on the Puget Sound where you can rent a kayak for the day (or week), charter a kayak tour, or drop in your own kayak.

But should you? Are there better places to go? And, if there are not, what are the best places to kayak in the Puget Sounds? Well, we’ve got you covered on all of those questions.

Can You Kayak In The Puget Sound?

The Puget Sound is a huge expanse of water the beckons to any kayaker who sees it. All the nooks and crannies on its 1,332 miles of coastline are just begging to be explored.

But it is safe?

In general, you’ll be as safe kayaking in the Puget Sound as you would be on any other body of water. While there are deep water areas that are frequented by large boats and ferries you are unlikely to stray far enough from shore for that to be a problem.

If you’re in the PNW during the spring, summer, or fall be sure to add the Sound to your Kayaking destination list.

You won’t need any sort of license or permit to kayak in the Puget Sound as long as you don’t intend to fish or try to land on any private property.

7 Best Spots In The Puget Sounds To Explore Via Kayak

Before we hit the list, I should note that these aren’t in any particular order. The best place to kayak is almost always the place closest to you so start from there and work your way onward through the rest.

Hope Island is one of the most southern areas in the Puget Sound on this list but it might also be the coolest.

Hope Island Marine State Park is a 132-acre island that is only accessible via watercraft (there is no regular ferry service).

Once on the island, you can take advantage of the beaches (which are great for clamming), hiking trails, plentiful wildlife, and more.

I will say that you should be sure to bring your own water, especially if you’re planning on camping, as there are no facilities of any sort available on the island.

Gig Harbour is one of the most popular destinations for kayakers and paddleboarders in the whole area. It is one of our favorite areas where you can kayak to one of Washington’s lighthouses.

On a warm day, you can expect to see dozens of people putting into the water and exploring or getting in some exercise.

If you’re just looking to get your feet wet this is a great place to start out as there are plenty of people around which, if you’re kayaking, is typically a sign of safety. There are also dozens of rental areas near the water where you can get your vessel of choice placed right on the beach for you.

If you have your own kayak or boat there are 8 public boat launches in Pierce County from which you can access the water.

There are several places to put in in Quilcene Bay (we used Quilcene Boat Haven) from which point you can paddle past Point Whitney as into Dabob Bay.

There is abundant wildlife here and many people report setting eagles, otters, and seals in addition to normal marine life such as fish and starfish.

If you need more of a “destination” to feel accomplished about your paddle trip then continue on to Jackson Cove before you return.

I know that “Fidalgo Island” is a pretty broad place to include on the list but you can kayak just about anywhere on or around the island and have a great experience.

The area is incredibly scenic and, from most areas, you will be treated to a stunning view of the Olympic Mountains.

Our favorite spot to kayak in this area of the Puget Sound is actually Deception Pass State Park. Deception Pass is the narrow straight that separates Whidbey Island from Fidalgo island and is home to some beautiful cliffs and plentiful wildlife.

Just northeast of Sequim you’ll find another of our favorite islands in the Puget Sound: Protection Island.

The is home to the 379-acre Protection Island National Wildlife Refuge which protects dozens of local bird species (as well as seals) that use the island to breed.

Before you head out for the island, however, be sure to check if it’s currently open. It has been closed for breeding seasons and there is talk of closing it permanently to the public to save the animals from constant disruption.

Even if you are not allowed to set foot on the island, many local companies give boat tours and you are free to paddle around the island as long as you don’t approach within 200 yards of shore.

If you’re going to keep your distance, launch from Diamond Point and head straight south. It’s a bit of a paddle so this is not one that I would recommend for beginners, especially with no mid-point to get out and stretch.

Eld Inlet is a popular Puget Sound destination throughout the year. One of the best parts of kayaking in the cove is that you can adjust the length of your trip to how you’re feeling at the time (and the weather).

If it’s cold, just explore a single cove. If it’s nice out, paddle your way through a few more.

You’ll never be far from shore and the lack of strong currents and upwelling make this a great trip.

There are also tours of Eld Inlet available if you want to follow a predetermined route or have someone show you the sights.

Any list of Puget Sound wouldn’t be complete without a mention of Elliot Bay.

Elliot Bay is the piece of the Puget Sound that Seattle is best known for (and viewed from). From the bay, you can distance yourself from the dirty hubbub of the city and get an amazing panoramic view.

If you want to see the iconic Seattle skyline, this is the place most likely to provide it.

This is a popular area for boat tours (not to mention cruise lines and boat hotels) so exercise some caution and common sense while kayaking here.

Kayaking The Puget Sound Near Seattle

If you’re kayaking near Seattle I’ve got a bonus spot for you that will, all at once, be way more exciting and boring than Elliot Bay.

The Ballard Locks are the second most visited tourist location in Seattle but, as a kayaker, you have the unique option of going through it rather than just viewing it from the top.

While hiring a tour is a solid option here you should at least watch the locks for a bit before paddling through. The whole trip can take an hour or more as the locks fill slowly but you’ll likely have a story that very few kayakers outside of the PNW can match!

Kayaking The Puget Sound Near Olympia

If you’re looking for some kayaking excursions around Olympia, you’re in luck. In addition to the Puget Sound, there are half a dozen other bodies of water to explore.

If you’re looking to escape the salt and try your hand exploring (or fishing in) a freshwater lake then head to Lake Cushman.

Lake Cushman is part of the Olympia National Forest and is famed for its crystal clear waters and heavily forested shoreline.

The lake (actually it’s a reservoir) is extremely popular so be sure to get here and put your kayak in the water early to avoid the crowds!

Whether you live in the PNW or are just visiting you’ll no doubt see a bit of the Puget Sound. However, I think that every single person who sees it should go the extra mile and see how it looks from a kayak.

Not only with kayaking the Puget Sound give you a great appreciation for the natural marine beauty of the area but even Seattle manages to look beautiful when you’re out on the water.

So grab a paddle (or rent one) and get out there!