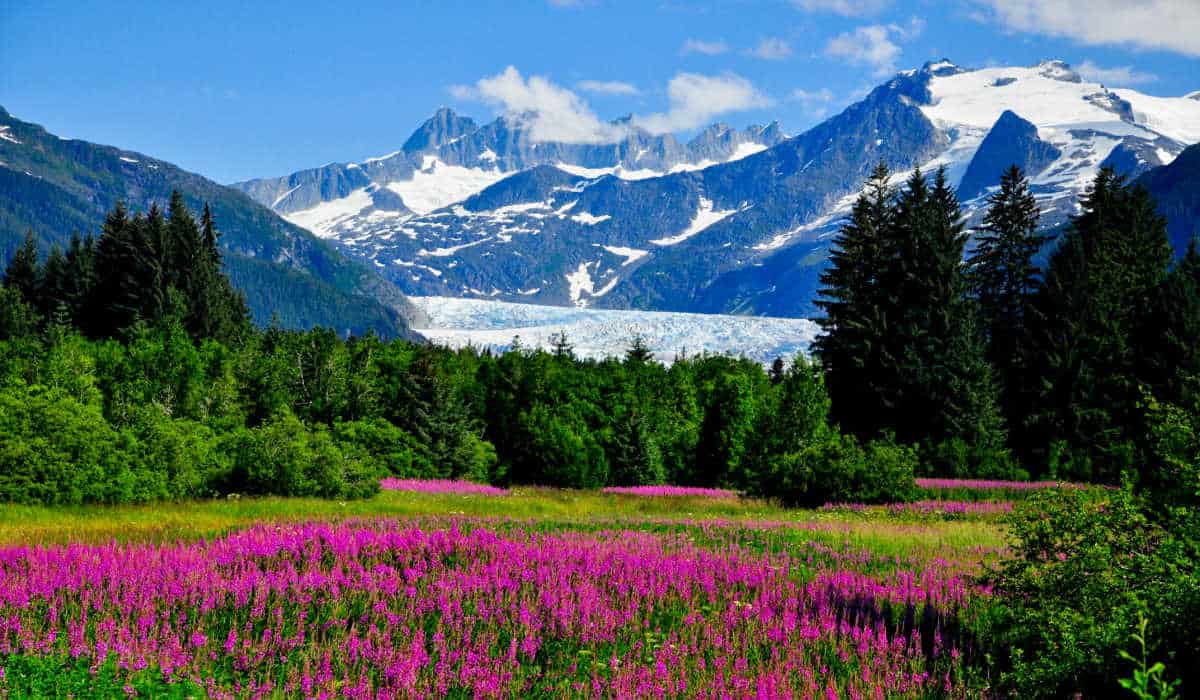 The Mendenhall Towers are a unique natural phenomenon located in Juneau, Alaska.

There are commonly defined as a “group of seven massifs” that have attracted sightseers for hundreds of years and climbers for the last 50.

The towers themselves are formed of columnar basalt, a type of igneous rock that cooled and solidified rapidly.

Products of a volcanic eruption that occurred over 12,000 years ago, the towers were originally part of the Mendenhall Glacier. However, as the glacier has retreated over time, the towers have been exposed and now stand alone in the landscape.

In fact, it was from the Mendenhall Glacier that the Towers received the name. While each mountain in the compact range has its own designation, the tower structure as a whole was named in 1964 by the Juneau Icefield Research Project.

Where Are The Mendenhall Towers?

If you’re looking to get there, head to Juneau, Alaska. The towers are technically part of the Coast Mountains of Alaska that run east-west and are located roughly 21 miles NNW of Juneau.

If you’re looking to attempt a climb of the towers, there are heli-landing sights within a couple of hundred yards of the base of most towers.

If you’re after adventure, you can spend a day hiking up Mendenhall Glacier via the West Glacier Trail.

If you fancy skiing instead you can ski to the Towers starting from Blackerby Ridge North to the north branch of the glacier.

For casual sightseeing or attempted climbs, a helicopter is the best option. There are private charters out of Juneau or you can go with a company such as Temsco Helicopters.

Are The Towers Climbable?

I’m a believer that pretty much anything is climbable. With the right confluence of skill and circumstances, yes, the Mendenhall Towers are climbable. However, I also believe that Devils Thumb is climbable so take my opinion with a grain of salt.

However, ease of access has made Mendenhall Towers a popular climbing destination in recent years. The fact that it lies within easy striking distance of a major city (by Alaska standards) gives it a spot on many bucket lists.

Add in the fact that it is easily visible to millions of tourists and the desire to conquer it is present in (probably too many) people’s minds. It’s not like it’s the tallest or most prominent face in the area. At a height of around 6,600 feet, the Mendenhall Towers are only the 24th highest peak of the 98 peaks designated in the Juneau Icefield.

There are a half-dozen rated routes that have been completed on the Towers. The most popular (probably because it’s the “easiest”) of these is the 10-pitch trad/alpine route dubbed Solva Buttress on the fifth tower (the towers are numbered left to right).

The named routes on Mendenhall Towers vary in length from a paltry 500 feet to just over 2,500 feet.

The first climbers to send any routes at the Towers were John Svenson and Mike Clark who first climbed the South Pillar of Main Tower in 1973.

Since then, most known routes have been completed several times. Most routes are located on the south faces of the towers as the routes are shorter, more protected from weather, and generally considered to be cleaner routes.

However, those who have made attempts on the northern faces have reported outstanding rock quality and crack formations.

Death On The Mendenhall Towers

In the past years, the Mendenhall Towers have claimed the lives of several skilled and dedicated climbers.

Unlike attempts in many other areas, it’s not the climb that kills, it’s Alaska.

Climbs in Alaska are unpredictable due to the weather and ever-changing rock/snow conditions. Despite the fact that it’s located in the U.S. climbing in Alaska is more akin to climbing in Nepal than in Wyoming.

Even well-planned attempts on the towers can go awry and conditions mean that rescues or recoveries are often impossible for many months after an incident.

For those that aren’t considering a climb, the Mendenhall Towers are an unforgettable sight that you’ll remember for years to come.

While you’re in Juneau, consider some of the awesome restaurants that we enjoy and the other activities in the area.

If you’re in the area for a brief period (on a cruise stop) then a helicopter tour of the Mendenhall Glacier is the absolute best bang for your buck.

See you out there!