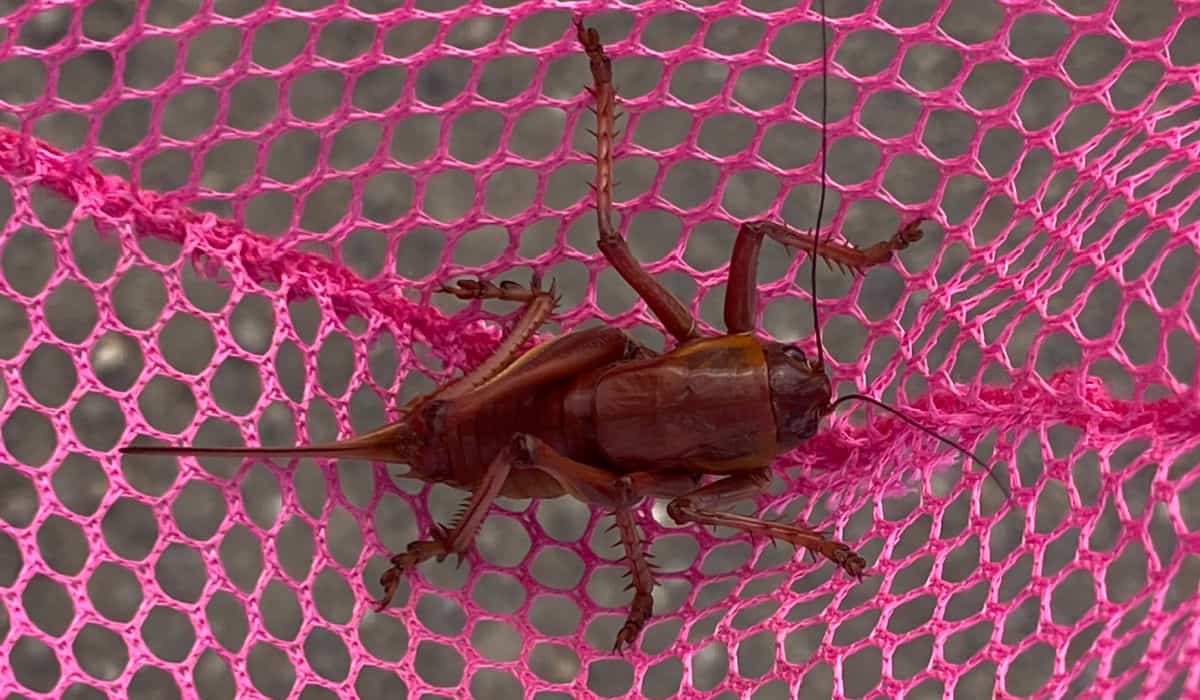 The other day, I took my girlfriend out on a drive a little over 100 miles from my home in Portland. We went on a lovely walk for an hour or two and, when we came back, the ground where we parked was swarming with thousands of crickets.

This is rather common around here, as Mormon Crickets have lived in the western United States for hundreds, if not thousands of years. If you’re driving through Oregon, you may want to know a little about them and why we have so darn many of the things.

First, I’ll explain their history and why they’re named after a religious denomination, then we’ll get into how to deal with these pests, if they’re a danger to humans, and whether or not you can own them as pets.

Why Are They Called “Mormon” Crickets?

The species has an interesting name on two levels. First, in 2019, the church began to emphasize the “Latter Day Saints” (or LDS) name and has asked media outlets to no longer use the term “Mormon”.

Secondly, they aren’t really even crickets. Strictly speaking, they’re shield-backed katydids, which are a type of bush cricket that, despite that name, are not related to the crickets you’d think of like the character of Jimminy Cricket from Pinocchio.

However, the name has stuck because of the history of the LDS settling in Utah and their position at the center of the event referred to as “the miracle of the gulls“.

What Was the Miracle of the Gulls?

In the 1840s, following the death of the church’s first prophet, Joseph Smith, Brigham Young, led the remaining church members westward to what is now the state of Utah. This is why there are so many LDS members in the state and where BYU (Brigham Young University) got its name.

During the group’s second harvest in 1848, a massive infestation of the species threatened their crops. After several weeks of fervent prayers, an army of gulls that lived in the nearby Great Salt Lake arrived.

The birds destroyed the invading species and saved the crop, which in turn saved the lives of about 4,000 LDS members, who regarded the event as a divine miracle. The California Gull was later named the official state bird of Utah.

The mormon cricket is an insect that is usually about two to three inches in length. It has wings, although they are purely decorative and do not allow them to fly. They have long antennae on their heads as well.

The species can come in several different colors depending on their travel patterns. Individuals tend to be purple or green, while those who are part of a swarm are usually brown, black, or red.

If you’re driving through most parts of Oregon, you can’t miss them. Even though they don’t fly, they can travel over a mile in a single day and, for some reason, love congregating around my car like that cloud that only rained on Charlie Brown.

Why Are There So Many Mormon Crickets Here? What is Their Natural Habitat?

Mormon crickets live primarily in the western parts of North America and a majority of the Pacific Northwest, although you aren’t likely to find them in Alaska, as it’s usually too cold to support them.

They range from British Columbia in the north, Montana and Manitoba in the east, and as far south as northern New Mexico and Arizona.

However, the annoying infestations are mostly located near the Rocky Mountains and the Great Basin, which includes parts of southern Oregon.

They mostly like to hang out in places with a lot of sagebrush or other desert plants, because they love heat and eating plants, both of which are in abundance here.

The reason that they tend to travel in swarms is a rather curious one with no definitive answer at this time but it is believed that, due to their cannibalistic nature, they have to travel quickly to avoid being attacked by other members of their group.

Although they can be annoying pests, Mormon crickets are not generally hazardous to human health. They don’t bite humans and tend to prefer eating plants, although they are also known to be cannibalistic and will eat other Mormon crickets to get protein or salt.

They prefer heat and are not known to invade homes, although as we saw with the LDS settlers who gave the insects their name, they can destroy crops and home gardens if they aren’t dealt with properly.

You should also watch out for them in traffic, as their swarms can result in slippery roads that could cause your vehicle to lose control.

Mormon Crickets are, however, harmful to each other. Cannibalism is one of the major ways that populations of Mormon Crickets are controlled and, if food is scarce, they will each eat other dead or alive. If you are somewhere in a swarm of crickets, crouch down and listen for a minute, that is, if you literally want to hear them chomping away on each other.

How to Deal with Mormon Crickets

Since they pose no direct threat to human health, in many cases it will be easier to simply ignore them. However, if you have a home garden or a farm, you may not have a choice if you’d like to save your crops.

One of the most common strategies is to play loud music, which they hate and may cause them to leave the area.

Other people will put out bird feeders or other devices to attract birds who will eat the invaders and leave your plants alone.

This one may sound silly and I don’t know that it’s been tried, but skunks do love to eat small insects and their bodies cannot digest plants, so they make the perfect garden security system. They’re even legal to own as pets in the state of Oregon!

You can also erect a small cricket fence to keep them out since they cannot fly and are poor climbers. It only needs to be about a foot or two high.

If you’re just driving through Oregon and you see a swarm of them on the road, slow down and drive as though you were going through a patch of black ice.

Are They Legal to Own?

Some people like to keep pet crickets, often as a child’s first pet, since they tend to be less of a responsibility than owning a cat or a dog. They also don’t bite, which means they won’t carry diseases or otherwise affect your general health.

The main drawbacks are that they chirp at regular intervals and they don’t smell particularly good, but if you have them in an enclosed tank, that will be less of an issue.

They also only live for about two or three months, which can be a good thing or not, depending on how you feel about owning them or how attached your child is likely to get over a particular one.

The best way to keep them in your home is an enclosed tank with one gallon of space for every 10 Mormon crickets. They prefer a dark place and a temperature between 70 and 90 degrees Fahrenheit. Empty egg containers at the bottom will give them shelter.

You can feed them plants or fruit, although they’ll eat just about anything (other than human flesh, thankfully!). Just be sure to keep them well-fed so that you don’t wake up to fewer pets than you thought you had.

Mormon crickets can be an annoying pest since they seem to be everywhere in parts of the Pacific Northwest, a problem that is only getting worse. It has been described as a plague of Biblical proportions.

However, they’re more of a problem for farmers and crops, since they don’t actively hurt humans and will not bite. Still, I get tired of seeing them constantly.

There are no laws restricting the ownership of Mormon crickets as pets, although personally, I’m not an insect guy, so I don’t think I’d ever do it but if you want to, go right ahead! I’ll never tell you how to live your life.

If you run into a group of them while driving through the state, don’t panic. As long as you drive carefully and avoid slipping on a swarm of them when they’re on the road, you should have no problems.

I hope you have a wonderful time on your visit to Oregon and we’re proud to welcome visitors from all across the world to our beautiful (albeit occasionally Mormon Cricket-infested) state!