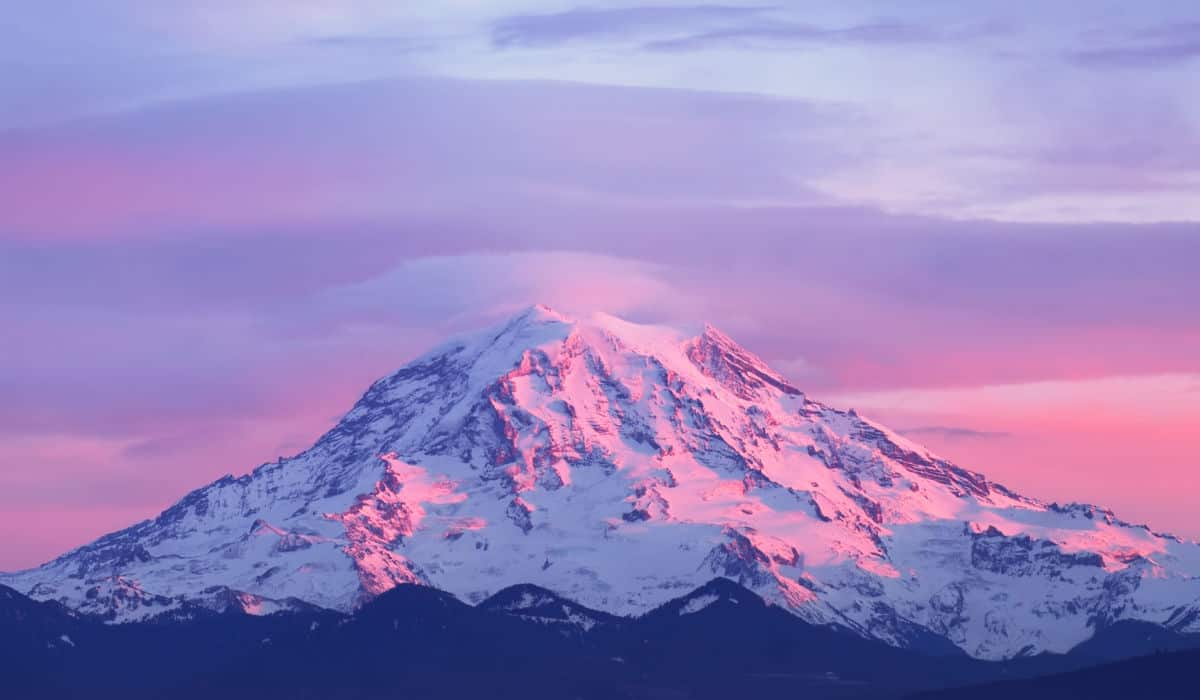 One of the things the Pacific Northwest is most known for is the impressive number of mountain ranges that we have. The Coast, The Rockies, The Cascades, The Columbia, and many others dominate the landscape.

In all, there are over 50 peaks in the region that reach heights of 8,000 feet or higher. The exact number depends on where you place the boundaries of “The Pacific Northwest,” a definition that can change from person to person.

I tend to have a more inclusive view than this list might indicate, with the majority of this list being in Alaska, Washington, and Oregon. There are great mountains in the Idaho panhandle and western Montana, too.

Let’s take a look at the top 11 peaks, at least according to me. They aren’t the 11 tallest or “best”, but simply the 11 that I think are most interesting.

Most Iconic Mountains Of The Pacific Northwest

When discussing mountains in the Pacific Northwest, I do like to start off with the tallest, so the first on our list will be Mount Rainier in Washington. It is named after Peter Rainier, an officer in the Royal Navy. Its Native American name is “Tahoma” or “Tacoma”.

At 14,411 feet, it is one of the tallest mountains in the contiguous United States. It is also on the list of “decade volcanos“, which are those that are expected to erupt at any time and cause massive damage.

The US Geological Survey predicts that, when it does erupt, 80,000 people and their homes would be in danger. I’d recommend going to see the mountain sooner, rather than later.

Speaking of volcanos in Washington, Mount St. Helens stands 8,363 feet high and is famous for its eruption in 1980 that sent ash for hundreds of miles and damaged many crops in eastern Washington.

Its English name comes from Lord St. Helens, a British diplomat who was a friend to George Vancouver, the Royal Navy officer who named many places in the Pacific Northwest. Its Native American names include Lawetlat’la, Louwala-Clough, and Loowit

Despite this, it is very popular among hikers and mountain climbers, many of whom visit year-round. A permit is only required for climbers who intend to go above the 4,800 feet mark.

One of the premiere skiing resorts in Oregon, Mount Hood is around 11,240 feet (the exact height is disputed) and is the only lift-operated ski resort in the United States that is open year-round.

It is also believed to be an active volcano, although experts do not believe that Mt. Hood will erupt anytime soon.

In addition to skiing, hiking, climbing, and other outdoor activities, the Timberline Magic Mile Sky Ride operates in the summer and gives visitors the opportunity to ride a chair lift 7,000 feet up the mountain.

Mt. Hood has always held a special place in my heart as it is one of the most iconic mountains visible from Portland (especially if you’re born after 1980 so you never got to see Mt. Hood & Mount St. Helens together on the skyline).

Here’s a bit of a hidden gem mountain in the Idaho panhandle. It is shorter than the others (standing only about 5,348 feet) but it also holds a special significance for movie fans.

Mount Pulaski is just two miles from Wallace, Idaho, where the movie Dante’s Peak with Pierce Brosnan and Linda Hamilton was filmed. However, it is not actually the volcano in the movie, as the establishing shots are actually of Mt. St. Helens.

Nearby is the popular Pulaski Tunnel Trail, a four-mile round-trip that marks the site of Forest Ranger Ed Pulaski’s rescue of 39 of his men during the Great Fire of 1910. The mountain was also named in his honor.

At 7,980 feet, Mount Olympus is the tallest of Washington’s Olympic Mountains and is the centerpiece of Olympic National Park, which receives several million visitors every year.

There are several glaciers on the mountain, which is unusual given its low latitude and low elevation. These are supported largely by the high levels of snowfall that the mountain receives every year.

Ironically, if you aren’t climbing the mountain itself, the only way to get a true view of the mountain is from Hurricane Ridge (also in Olympic National Park) or from the tops of other mountains, as those mountains obscure Olympus from the ground.

Bonanza Peak comes in at 9,516 feet, which makes it the tallest mountain in both the state of Washington and the rest of the Cascade Mountain Range which is not a volcano.

It is easily recognized in photographs by the three large glaciers that surround it: the northern Company Glacier, the southern Isella Glacier, and the eastern Mary Green Glacier.

It was originally named North Star Mountain, with Bonanza being given to a smaller peak nearby. However, due to a typographical error by the US Geological Survey, the names were switched and the new versions have stuck.

Located on the border of Alaska and the Yukon Territory, Mount Saint Elias is the second-highest peak in both the United States and Canada. Its summit stands 18,008 feet above sea level.

It is very rarely climbed and even then only by the most advanced and experienced climbers. The main reasons for this are the high levels of snow, the terrible visibility, and that no easy path to the summit has ever been found.

The US side of the mountain is part of the Wrangell–St. Elias National Park and Preserve, which is over 20,000 square miles and larger than nine states!

A little further south of Mt. St. Elias on the border between the United States and British Columbia is Mount Fairweather, whose summit is 15,325 feet.

These two are grouped together in a legend told by the Tlingit people, which states that Fairweather (Tsalxhaan) and Elias (Yaas’éit’aa Shaa) were originally next to each other but moved apart after a fierce argument. The mountains between them are called “The Children of Tsalxhaan”.

Despite the name, it is known to have terrible weather, receiving over 100 inches of snow on average every year. The average summit temperature is around -50 degrees Fahrenheit.

Mount Baker’s summit rises 10,786 feet above sea level and, despite being an active volcano, is covered with many glaciers.

Visitors to Seattle who ride the Link Light Rail are no doubt familiar with the name, as there is a transit station that serves the neighborhood of the same name, which it got because of its beautiful view of the mountain.

The Mt. Baker-Snoqualmie National Forest has over 1,500 miles of hiking trails, as well as a popular ski resort

In central Oregon, there are three mountains whose peaks are close together that are collectively referred to as “The Three Sisters”. They are individually known as North Sister, Middle Sister, and South Sister.

The North and Middle Sisters are considered extinct volcanos, not having erupted for 14,000 years. The South Sister is still considered active, however, with its last eruption dating back about 2,000 years.

There are many hiking trails and outdoor activities in the area, including the famous Black Butte Ranch resort, which offers activities like golfing and horseback riding, among others.

In the Northern Cascades of Washington, Mount Triumph stands a little over 7,240 feet tall and from a top-down view has been described as looking like a propeller with three blades.

It was named by a US Forest Service surveyor, Lage Wernstedt, who also named several neighboring mountains, including Mount Terror and Mount Despair.

Between a mile and two miles away, the three Thornton Lakes can be found, which are easily accessible by a trail. The third one, unofficially known as Lower Thornton Lake, is a popular destination for backcountry campers.

This is just a list of 11 of the most notable peaks in the Pacific Northwest, at least in my opinion.

Despite being thousands of miles apart, they are all beautiful examples of nature in one of its purest forms and provide many opportunities for lovers of the great outdoors to have a wonderful time doing any number of activities.

No matter where you go in the Pacific Northwest, you’ll get a great view of some of the most amazing mountains that North America has to offer. We can’t wait to see you soon!