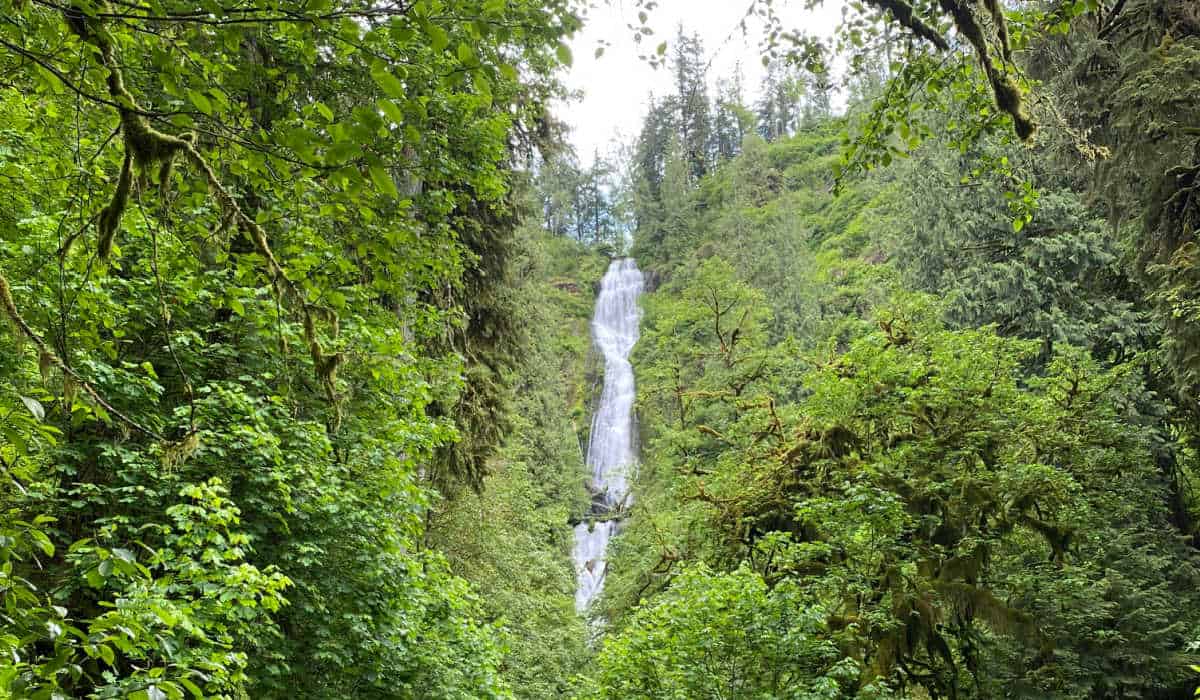 You simply can’t road trip or vacation in the Pacific Northwest without enjoying some of the area’s spectacular waterfall hikes.

On a recent road trip up Oregon’s southern coast, we got rained out of the beach (for a week straight…welcome to Oregon…) so we decided to look for some hikes a bit inland.

We settled on what looked like the most spectacular waterfall hike that was easily accessible with kids: Munson Creek Falls.

Hiking Munson Creek Falls was the highlight of our hikes on that trip and my daughters are still excited to see it when we scroll back through our vacation photos.

Munson Creeks Falls Natural Site (that’s its full name) is a state park managed by the Oregon Parks and Recreation Department. It is the tallest waterfall on Oregon’s Coast Range, topping out at a massive 319 feet.

While the insane amount of greenery and lack of exposure means that it isn’t quite as striking (in my opinion) as something like Multnomah Falls it’s still an incredible hike and in a league of its own if you’re looking for something to do without straying too far from the coast.

Getting To Munson Creek Falls

The best way to get to the Munson Creek Falls trailhead is simply to map it on your phone. It’s a bit convoluted and out of the way so it’s much easier than trying to follow directions.

However, you’ll want to do it from a ways away because you’ll likely lose service as you get closer (I did).

However, if simply mapping it isn’t an option, here’s how you’ll get there (at least from the direction we came from):

The falls are located in the Siuslaw National Forest, about 30 miles east of Florence. To reach the falls, take Highway 126 east from Florence for about 15 miles. Then turn north onto FR 24 (also called Aufderheide Drive). After about another 15 miles, you will see a sign for the Munson Creek Falls trailhead on the left side of the road.

We were warned by several locals that the road would be horrific due to the amount of rain that had been falling but we decided to chance it.

In general, the quality of the road will depend heavily on how much rain there has been and whether it has received any maintenance recently. Luckily for us, the road was a fairly normal unpaved Oregon road. It was a mix of gravel and dirt with some normal washed-out potholes.

It does get a bit narrow at times so passing other cars is a bit tricky but we handled everything just fine in our front-wheel drive crossover. There were several sedans at the trailhead as well so unless there was a recent monsoon I wouldn’t consider the road a reason not to attempt the Munson Falls Hike.

The trail to the falls is a little over a 1/4 mile long and is rated as easy to moderate.

It is a well-groomed trail with handrails in spots, steps to stop erosion, and rock-walled banks along the stream.

As the falls are frequented by tens of thousands of people per year you should expect to find a well-traveled trail with several hiking families (and probably a few dogs).

We found the trail to be quite easy, even for our 3-year-old who walked the whole way.

We looked at a lot of bugs and mushrooms along the way and ended up spending about 1.5 hours on the hike.

It’s worth noting that you can’t actually get very close to the falls anymore. There has been a significant amount of deadfall as well as trees coming over the falls which have caused them to put up a fence and end the trail about 300 feet before you get to the bottom of the falls.

While the view is still spectacular it does put a slight damper on picture taking and getting an up close and personal experience with the falls.

This may change in future as the trail is cleared of deadfall and the bottom of the falls is less precarious.

Is It Worth The Trip?

If you’re within a short driving distance, Muson Creek Falls is well worth the stop.

The area is beautiful and there are a couple of other trails around. We drove east from the coast specifically to do this hike and felt that it was time well spent.

Munson Creek Falls is particularly enjoyable with kids as the trail is easy and the falls are as good as they get.

There is also a picnic area with 3-4 tables at the trailhead (as well as a porta-potty) so you can bring your lunch and make a trip of it.