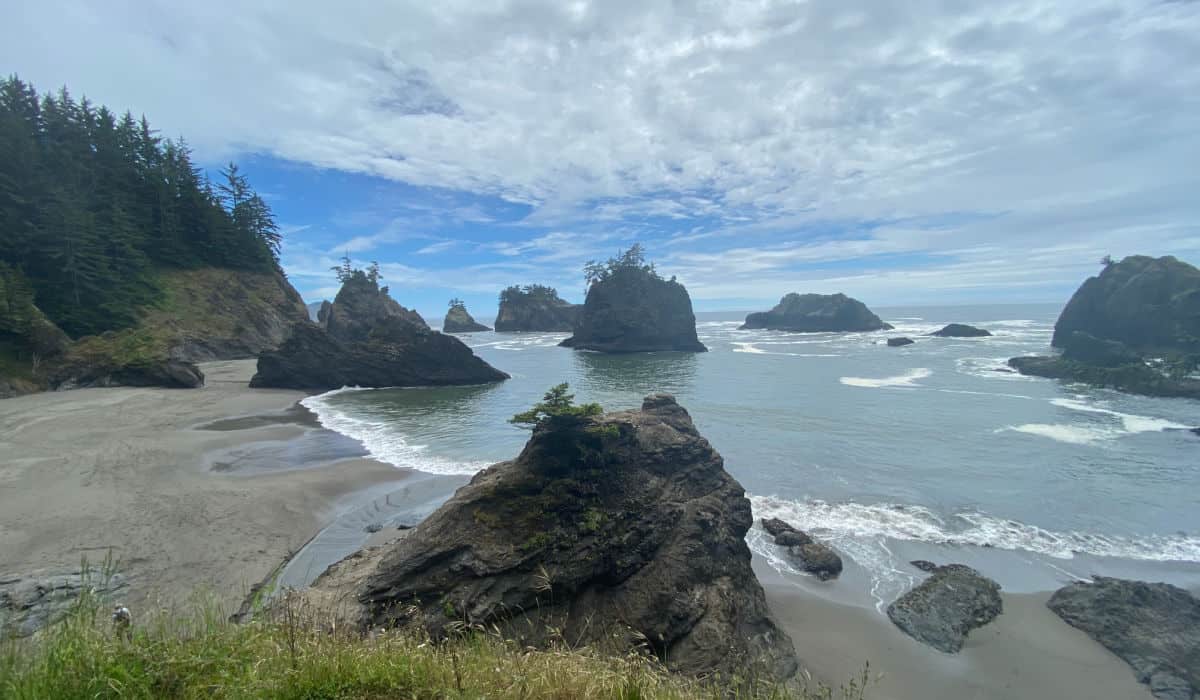 My wife grew up in Washington and, despite traveling all over the PNW after getting married we always felt a bit superior when we were in Washington.

For some reason, we always viewed Oregon as Washington’s dirty little stepbrother. We knew Oregon has beaches, mountains, and trees (everything that Washington has) but we just thought that what they had wasn’t quite as good.

That is, until we took an impromptu trip the length of the Oregon Coast. Long story short, it blew our minds. The Oregon Coast is so radically different that what we found in Washington that we were left wondering, which coast is actually better?

Since then we’ve spent a bunch more time on the Oregon coast and finally feel ready to tackle the question of the Oregon Coast vs the Washington Coast.

Of course, the real answer is “it depends” but hopefully I can offer enough experience and insight that you’ll be able to decide where to visit or move!

However, if you already have an opinion, let us know by voting…

Intro To The Coasts – Background

I’ve written extensively about the Oregon Coast, so I’ll summarize the major points of interest and activities that can be enjoyed there.

Many famous and beautiful rock formations, like The Needles and Haystack Rock, can be found here. There are also lighthouses, plenty of hiking trails, and a lot of beautiful scenic views to take in.

The Seaside Aquarium has an underground tunnel that allows you to view marine life like never before. Speaking of water, some of the best beaches on the West Coast can be found here.

The Tillamook Cheese Factory is a fun adventure for the whole family and its free tour gives you a chance to sample some of the freshest cheese you’ll ever taste.

There are also a lot of sights and activities on the Washington coast as well. Olympic National Park is an amazing place to hike and see Mount Olympus (not the one Zeus lives on, it’s the other one).

Long Beach (not the one in California, it’s the other one) is 28 miles of continuous sand, which makes it the longest beach in the United States. The sand here is incredibly dense, so much so that you can actually drive on it!

The San Juan Islands are also part of the coast, although they are not on the mainland, of course. They’re some of the best vacation islands on the West Coast and I highly recommend spending a few days there if you have the time.

Despite the name, Cape Disappointment is anything but, with amazing views and a beautiful lighthouse to see.

Washington State has many islands off the coast, including the San Juan Islands and the ones near Seattle (Whidbey, Bainbridge, etc) if you choose to include Puget Sound as part of the coast.

Oregon also has a lot of islands, but most of them are protected sanctuaries for marine animals and birds that can’t be visited. Still, that means there are many great opportunities to see these rare creatures with binoculars from the beach.

Although the Oregon Coast is longer, many of the sites are closer together, which makes it easier to go from one to the other. The Washington Coast is more spread out and you may encounter several long stretches that don’t have a lot to do or see.

US Highway 101 runs through both states, but the Washington side has several parts that are in heavily forested areas that don’t give great views of anything but trees, which is great for the first mile and not as great for the next 20 or so.

In terms of beaches, if you want to enjoy a sand beach (with the possibility of the sun) then head to Oregon. Washington beaches tend to have more rocks and driftwood.

If you enjoy tidepools or beach combing, both are great options.

To give us the best idea of which is “better” let’s see how the two stack up in a variety of ways by comparing the things that you’d actually want to do when visiting the coast.

Accordingly, there’s more to do and see on the Oregon side, but because it is over 200 miles longer, things are more spread out and if you have a limited amount of time, you might not be able to see everything you want to see.

From Seattle to Cape Disappointment, depending on which route you take, it’s about 175 to 200 miles each way or between three and four hours of driving. You could easily see the entire Washington Coast in one day.

The fastest route from Portland to Brookings is 344 miles or a little over six hours each way, assuming no one in the vehicle needs to stop for food, gas, or a bathroom break. If you wanted to see the entire coast, it’ll probably be a two-day trip at the very least. This past summer we spent 12 days on the Southern Oregon Coast and would have happily stayed longer if we hadn’t been rained out.

Both Oregon and Washington have amazing beaches in my opinion. However, they’re definitely Pacific Northwest beaches. While there is sun and sand you’ll also cold water, lots of rocks, driftwood, tidepools, and people wearing hiking boots rather than bikinis.

In general, Oregon Beaches tend to be cleaner and more what people expect when visiting a beach. Particularly in southern Oregon the beaches are more similar to California beaches and are well maintained.

Washington beaches tend to feel more rugged as the trees approach closer to the beach, they’re often littered with driftwood, and there is very little sand.

Both are great but if you’re looking to go to the coast for a “beach experience” with a smattering of PNW flair, then Oregon is probably a better option.

Both Oregon and Washington have a plethora of hikes close to the coast.

My favorite overall place for hiking on the coast is either southern Oregon or the Olympic peninsula. Both feel otherworldly with incredible vegetation and picture-worthy views around every corner.

Check out a few of our articles on coastal hikes to see which is a better fit for you:

If you’re looking to trek the coast on a budget, there are hostels in Oregon and Washington as well as a ton of camping. Dispersed camping in Oregon is also an option so you can be sure to save money by pitching a tent in the wild.

If you’re not on a budget, head to Washington. While there are no Michelin Star Restaurants in the state there are many lodges, retreats, and find dinner opportunities that you simply won’t find in Oregon’s small coastal towns.

So, Which One Is Better?

As is often the case, I like to live firmly in the middle and I think there are great things to do and see on both coasts, so which one is “better” really depends on which one fits your specific needs and travel plans.

If you have one day to see everything you want, you might prefer Washington since there are fewer points of interest and you can see most of them in a single day.

If you have multiple days or even a week, the Oregon Coast is probably the better option, as you might end up running out of things to do by the third day.

If you have around a week, you could very easily do both. If it were me, I’d probably rent a car in Seattle, head down the Washington Coast, work my way down to Brookings or Bend, and then drive back up to Portland and fly from there.

Either way, there’s one thing that both Washingtonians and Oregonians are likely to agree on here: either coast is better than Southern California’s!

Both coasts have a lot of things going for them and there are many great sights to see and adventures to be had on each. Both have mountains, beaches, hiking trails, amazing scenery, lighthouses, and plenty of other exciting activities for the entire family.

Oregon’s coast is longer and therefore has more to do, but it’ll take a lot longer than
a trip down and back on Washington’s, which could easily be completed in a single day.

To choose which one is best for your vacation or day trip, you should ask yourself two questions: “How much time do I have?” and “What do I want to see?”

If you only have a day but want to see the Seaside Aquarium’s underground tunnel and the rock formations near Cannon Beach, I’d choose Oregon. If you have a week but you really want to see Olympic National Park, I’d choose Washington.

There’s no reason you can’t choose both, however! If you fly to Portland instead of Seattle, you can drive the 90 miles to Astoria, visit the beach, then take the Astoria-Megler Bridge across the Columbia River and into Washington.

Speaking of, the bridge itself is also a cool spot, as it is 4.1 miles and therefore the longest continuous truss bridge in the United States. You’ll also get amazing views of the Columbia River.

No matter which coast you choose on your next trip, the Pacific Northwest can’t wait to welcome you on your next exciting beach, nature, or mountain adventure!