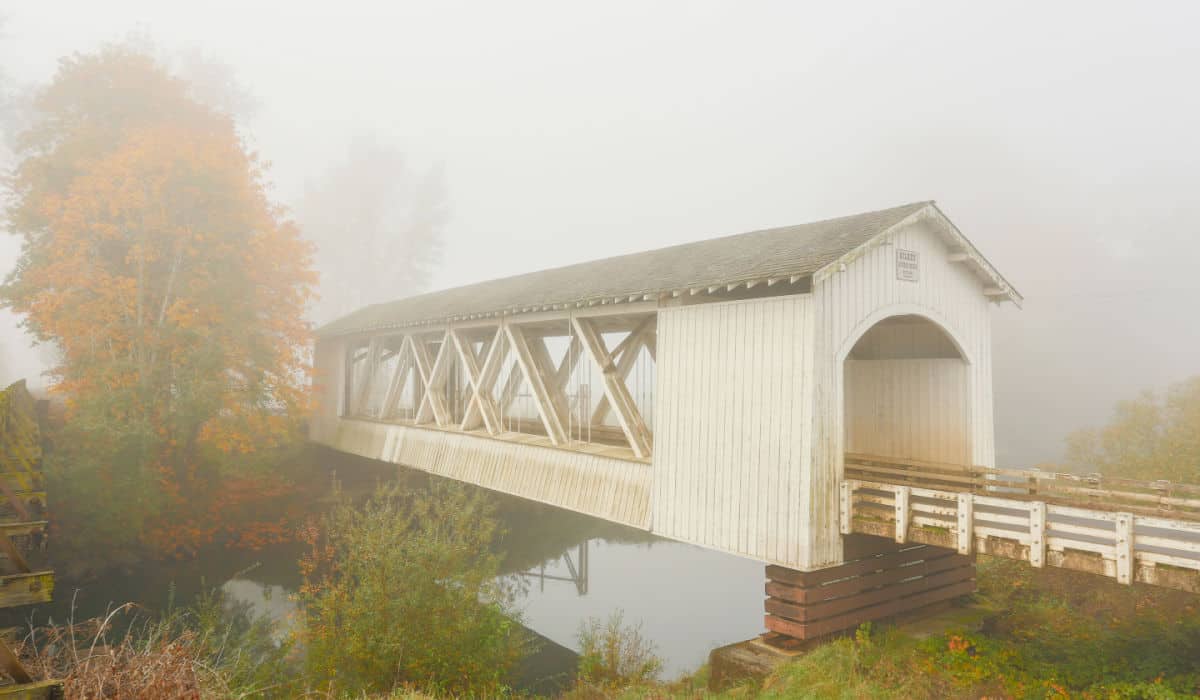 I attribute her desire to all the period romance novels she’s been reading lately but who am I to argue?

Oregon is a virtual treasure trove of covered bridges and is the best place to go to photograph them and enjoy their history. So we made a trip out of it.

Oregon was once the home to more than 400 covered bridges, harkening back to a time when life was simpler and technology nonexistent. Driving around to see all the bridges I quickly started imagining horse-drawn wagons, ladies in long dresses, and even a few lovers stopping to sneak a kiss away from their parents.

Hmm…maybe I should stop reading my wife’s romance novels.

Out of the 400+ original covered bridges in Oregon, most have rotted away, become unsafe, or been replaced with modern structures. Of the 54 that still stand, several are still used for foot or vehicle traffic (albeit one lane only).

Why Are There So Many Covered Bridges In Oregon?

Early pioneers in Oregon started building bridges as soon as they arrived in the state (there is tons of water to cross, after all). Using only hand tools, sweat, and determination they were able to erect hundreds of simple bridges.

But then mother nature remembered that she has an appetite for wood. An uncovered bridge often deteriorated within a decade or two and needed significant upkeep.

So Oregonians had the bright idea to put a roof on their bridges.

Covered bridges are protected from rain, sun, snow, and ice which can extend their lifespan to 80 years or more.

While none of the earliest bridges are still around (the first ones were built in the 1850s…) there are many later ones still standing. Nearly all of those still usable have undergone extensive repairs over time to keep them safe.

Despite the deterioration of most bridges in Oregon they still have more covered bridges than any other state west of the Mississippi. Many of them are now historical landmarks and are located in parks or in out-of-the-way places where it’s okay to have a wooden bridge with a lower capacity than a steel or concrete one.

So whether you living in Oregon or are just driving through, be sure to stop and take pictures of these amazing relics from a bygone era. You might even get lucky enough to drive on one!

I wish I was able to take pictures of every single one of these bridges. However, I’ll include the ones I currently have and hope that I get more to add soon!

I chose to separate these by county so that you can find ones near you. If you’re not familiar with the counties of Oregon you can find yourself on the map before locating the bridges in your county.

Benton County has some of the longest covered bridges in all of Oregon.

Its crowning jewels are the 75-foot covered bridge spanning Mary’s River (pictured below) and the oldest bridge in Oregon, the 91-foot behemoth that spans the Alsea River.

One of the most recent covered bridges was built in this county in 1954 but now resides at Oregon State University where it was moved.

Coos County is home to only one covered bridge, the Sandy Creek Covered Bridge which is no longer used for vehicle traffic. Instead, it sits in a parklike setting and you are free to visit and take pictures to your heart’s content.

Deschutes County is home to only one covered bridge, the Rock O’ the Range Bridge.

It is, in fact, the only covered bridge located east of the Cascade Range (eastern Oregon is a desert after all) and one of the few bridges build recently. It was built for private use.

Other bridges of note include the 105-foot Horse Creek Bridge built in 1930, the Milo Academy Bridge, and The Neal Lane Bridge.

If you’re looking for a bridge to visit just for the scenery, visit the Neal Lane Bridge during the fall months as the numerous Myrtlewood trees surrounding it make for an incredible background.

Other bridges in the area include the Pass Creek Bridge (pedestrian only since 1989), the Roaring Creek Bridge, and Rochester Bridge.

Jackson County has four covered bridges of note, including Lost Creek Bridge, considered to be the shortest covered bridge in Oregon at only 39 feet in length.

There is also the 122-foot McKee Bridge which spans the Applegate River and the Wimer Covered bridge which has been crossing Evans Creek since 1892.

If you enjoy haunted areas and looking for ghosts in the PNW then the Graves Creek Bridge is the place for you.

Not only does it have a super cool name, but it was named after Martha Leland Crowley who died crossing this river (pre-covered bridge) in 1846.

If you see her here, tell her hello for me!

Lane County has a huge number of covered bridges, many with their own unique features that they use to attract visitors. Here are some of my favorites and their highlights:

Lincoln County has three covered bridges: the Chitwood, the Fisher, and the Northfork of the Yachats.

In Linn County, you can find a whole slew of covered bridges. The ones that still stand are:

Marion County is home to one of the “must-see” covered bridges that make it onto almost everyone’s lists: the Gallon House.

Additionally, be sure to stop and see the Jorand and the Overfield, Oregon’s newest covered bridge built in 2000 as a pedestrian crossing over Silver Creek in Silverton.

Multnomah county nearly got missed entirely by the bridge building crew and has one solitary specimen that is still in use, the Cedar Crossing Bridge.

Polk County has two surviving bridges, the Fourtner and Ritner Creek (below) bridges.

If you want to visit a covered bridge in Oregon, visit the one closest to you. Some bridge-loving person will probably have a tizzy about this but, really, they’re all about the same.

However, if you’re on a road trip, these are a few with something unique about them that you could tell someone about.

It may also be the oldest, but nobody really knows.

There is some anecdotal evidence that the bridge was constructed between 1881 and 1889. Any year within the dates would make it the oldest covered bridge in Oregon. However, the “official” date of construction is 1919 which, may have just been an update or repair.

The bridge is no longer used for traffic but is still a popular destination. Or as popular as it could be in its location.

Lost Creek Bridge spans a small tributary of Little Butte Creek near an unincorporated community about 14 miles Northeast of Medford. If you’re visiting here anyway, the bridge just might be the most exciting thing you see.

The bridge narrowly escaped demolition in the 60s and 70s before being added to the National Register of Historic Places in 1979.

Also known as the “Office Bridge” Westfir Covered Bridgespans a full 180 feet and is the longest (and largest) covered bridge in Oregon.

In addition to being the longest covered bridge in Oregon, the Office Bridge might also be the strongest. One of only two bridges in Oregon that uses triple beam construction, this bridge was built by a logging company for lumber trucks leaving the Willamette Forest to pass through.

As an added point of interest, it is the only covered bridge west of the Mississippi that has a separate covered pedestrian walkway.

This bridge is also fairly out of the way as it crosses the North Fork and Middle Fork of the Willamette River on the extreme south end of the Aufderheide National Scenic Byway.

But if you’re in the area!

On the official books, the Drift Creek Bridge is the oldest covered bridge that still stands in Oregon.

However, if more evidence ever comes to light it may have to give up the title.

As it stands, however, its 1914 construction makes the bridge 108 years old which is pretty impressive either way.

If you’re hunting for iconic bridges this one might be the most accessible.

Head north on Highway 101 from Lincoln City and turn east onto Highway 18. Take a right onto Bear Creek Road at milepost 3.96. The bridge will be on your left 1 mile down the road.

It’s always incredible to me how many people can travel through Oregon and not realize the importance of all of the covered bridges. In fact, it’s even more incredible that many people don’t even see them.

Driving out to some of the more remote locations of some of these bridges turned out to be a great way for my wife and me to see a bit of Oregon that we wouldn’t have otherwise experienced.

So, if you get the chance, go photograph a couple while they still stand!