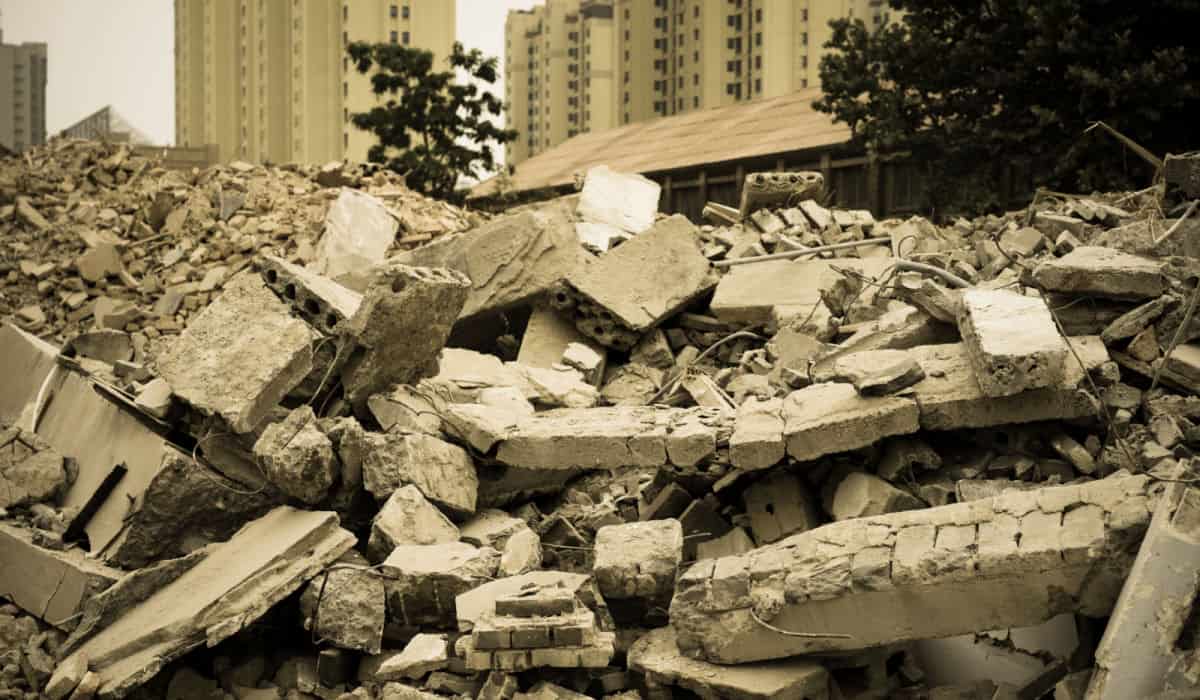 As far back as when I was in middle school in the late 90s, I remember being told that the San Andreas Fault was a ticking time bomb and that California would one day sink to the bottom of the ocean after an earthquake.

I remember saying to myself in 7th grade, “Why would people still want to live in California if it’s going to be underwater any day now?”

Then, a few years later, I saw Superman: The Movie, starring Christopher Reeve and Margot Kidder, which became one of my favorite times of all time.

The plot is that Lex Luther buys a bunch of worthless land in the Nevada desert but plans a strategically-placed missile strike on the San Andreas fault, sinking California to the bottom of the ocean and making Nevada the new coast, making his land worth millions.

So far, it hasn’t happened. In fact, scientists now say that it’s very unlikely to happen because the San Andreas fault could never produce an earthquake of a high enough magnitude to sink California.

The Pacific Northwest isn’t entirely out of the woods, however. While most Americans know about the San Andreas Fault, the Cascadia Fault runs from British Columbia to Northern California and is a much bigger threat.

Let’s take a look at the history of earthquakes in the Pacific Northwest, then we’ll discuss the present situation, and what the future may hold.

History of Earthquakes in the Pacific Northwest

One of the biggest earthquakes in the area in recent memory was the March 1993 earthquake near Scotts Mills, Oregon, a small town about 30 miles south of Portland. It was responsible for $28 million in damage.

Before that, the 1872 North Cascades earthquake took place in the mountains near Wenatchee, Washington, with light shocks being felt as far away as Montana. Thankfully, it was in a remote location and very little damage was recorded.

However, the largest known earthquake in the region took place in the year 1700, with an estimated magnitude between 8.7 and 9.2. It caused a massive tsunami that affected Pacific Ocean coasts as far away as Japan, nearly 5,000 miles away.

The exact date of the earthquake is unknown because of the lack of local records kept during that time. However, the date can be approximated based on Japanese records of the tsunami and tree growth records in Northern California.

Up until about 50 years ago, no one knew the earthquake had even taken place until researchers and seismologists pieced the information together from Native American accounts and other research.

The earthquake was caused by the Juan de Fuca Plate (named after the famous Portuguese explorer) subducting, or sliding underneath, the North American Plate, which covers the entire continent.

That sliding continues to this day, with the region from British Columbia to Northern California being known as the Cascadia Subduction Zone.

Is Another Earthquake in the Cascadia Zone Likely?

Some seismologists believe that another major earthquake will hit the Cascadia Subduction Zone within the next 50 years. They also believe it could potentially be one of the most deadly earthquakes in the history of North America.

They believe that tectonic plate activity in the subduction zone will produce a major catastrophic event roughly every 1,000 years and, to put it simply, we’re due for the next one.

However, others believe that earthquake predictions are about as accurate as warnings that the stock market is about to crash.

As the old joke goes, economists have predicted 75 of the last ten recessions. Seemingly every other week for the past hundred years, some economist has warned everyone that the stock market is crashing any second now and it very rarely ever comes true.

How Prepared is the Pacific Northwest?

Unfortunately for most of the region, the answer is “not very”. There’s a lot of older infrastructure around here that was built many years before anyone even knew the earthquake in 1700 happened.

Experts in King County, Washington (where Seattle is located), have stated that a major earthquake would likely damage 58% of the county’s current buildings.

A lot of them, like the brick buildings found in and around the International District and Chinatown section of downtown, are made of unreinforced masonry. Newer buildings were built with protection from seismic activity in mind.

When my family went on the Seattle Underground Tour we were supposed to be looking for ghosts but all I could think was that, when an earthquake happens, not a single one of the historic buildings we were walking under would be standing.

The Federal Emergency Management Agency, better known as FEMA, has suggested that if a major earthquake were to take place, it would likely wipe out everything to the west of I-5.

Whether a catastrophic natural disaster like the one in the movie San Andreas starring Dwayne “The Rock” Johnson ends up happening or not, the experts don’t believe it’ll happen anytime soon.

There is no evidence that the risk levels are dangerously high or that it could happen at any moment. If a catastrophic earthquake like the one predicted does take place, it’ll be a few decades away at the earliest.

That said, this is strictly talking about major earthquakes. Minor earthquakes, which is to say, those with a Richter Scale reading of 6.0 or less, do happen on occasion.

In a “strange but true” moment, as I’m sitting here writing this, I saw a news bulletin on my phone saying that a 4.5 magnitude earthquake hit the Pacific Ocean earlier today, with the epicenter 100 miles west of Coos Bay, Oregon.

No damage is expected because it was so remote and no one has yet reported feeling the shocks at this time. Still, I find it a strange coincidence that it happened while I was in the middle of writing this.

Are People in the Pacific Northwest Worried?

People here are worried to a certain extent, yes. There is a famous piece in the New Yorker from 2015 that talks about how unprepared we all are for a major earthquake but that’s now outdated. Things have changed a lot in the past seven years.

Nearly every company and building in the entire Pacific Northwest has a specific action plan in the event of an earthquake like the fire escape plans that elementary school students work on with their families.

The main cause for concern is the number of older buildings with unreinforced masonry that are not protected against earthquakes. Replacing these buildings with modern craftsmanship is also prohibitively expensive.

Most people know that it could potentially hit at any moment but we don’t let it control our lives. If it happens, we’ll deal with it as best we can. Until that day, however, we’re going to keep living our lives.

Should I Cancel My Visit to the Pacific Northwest?

Despite the possibility of an earthquake, the Pacific Northwest is still an amazing place to visit and the risks are minimal.

Natural disasters can happen anywhere at any time. The Eastern Seaboard has hurricanes, the midwest has tornadoes, Alaska has bears, and a tidal wave could theoretically destroy Hawaii at any minute.

There is nothing about the history of previous earthquakes or predictions for future ones that should be a cause for alarm. It would be like not visiting Disney World in Florida because the area gets hurricanes.

I know that it’s not a perfect analogy because hurricanes can be forecasted and earthquakes can’t, but still.

Should I Avoid Moving to the Pacific Northwest?

I understand that visiting and moving here are completely different ideas and have similar but still different answers, so I’ll answer them separately.

A lot of people who live here have gone their entire lives without ever feeling the shock of an earthquake. Geologically speaking, it’s perfectly safe to live here.

Obviously, I can’t 100% guarantee your safety, especially depending on which neighborhood you might move to, but the fear of a natural disaster shouldn’t dissuade you from enjoying the rich beauty of the northwest coast.

If you do decide to move, I definitely recommend investing in a good insurance policy. Whether it’s homeowner’s, renters’, or another kind, you’ll want to make sure that you have a natural disaster clause that will protect you in case of an earthquake.

Not all insurance policies will cover it and you may need to ask about having a rider added. Some policies refer to them as “Acts of God“, which I don’t really think is fair to God but I didn’t name it.

I’d also recommend finding out what year the house or apartment building you’re looking at moving into was built. Unreinforced masonry was common until the 1960s and anything built after that will offer better protection.

What to Do If an Earthquake Hits

Just in case you happen to be here or somewhere else when an earthquake of any magnitude strikes, here are some tips that might save your life.

If you’re inside your home, it’s best to remain indoors. You’ll want to crouch down underneath a desk, a table, or another sturdy object that will protect you in case it’s a severe one and the roof collapses.

You’ll want to avoid being near windows, glass, or anything else that might shatter. The kitchen is also a bad spot, as there’s a good chance an object will fly out of a cabinet and hit you on the head.

If you’re outdoors, you’ll want to walk toward an open space. Lamp posts, telephone poles, and other things could fall to the ground if the quake is large enough, so you should find a space that doesn’t have those things above you.

Drivers should park their cars quickly but safely. You’ll want to avoid tunnels, overpasses, and anything else that could collapse.

Above all, you’ll want to remain calm. I know that’s easy for me to say as I write this with my feet on ground that isn’t shaking but panicking won’t help. You’ll also want to protect your head as much as possible. A broken toe is much better than a broken skull.

Experts believe that a major earthquake could hit the Pacific Northwest sometime in the next 50 years. However, the science of earthquake prediction isn’t an exact science and there’s no guarantee it will happen.

On the other hand, there’s no guarantee that it won’t or that it’ll take 50 years to happen. Most people who live here accept the fact that a major natural disaster, like an earthquake, could happen at any moment.

However, we don’t let it get us down. Personally, I know that I could suffer from a major illness or get hit by a car walking down the street any time I leave my house.

I wake up every morning, tell my girlfriend that I love her, and go about my day. If it happens, it happens. I’d prefer it didn’t, of course, and I’m familiar with all of the safety tips in case it does but I can’t spend every minute thinking about it.

The Pacific Northwest is completely safe to visit and live in until such time as the earthquake actually hits. Now is an amazing time to come and visit our beautiful corner of the continent.

If you’re really concerned about the earthquake, you should book that trip even sooner! You’ll want to come see our unparalleled beauty and amazing sights before the earthquake swallows us all straight into the ground.

Either way, we can’t wait to see you soon on your next exciting Pacific Northwest adventure!