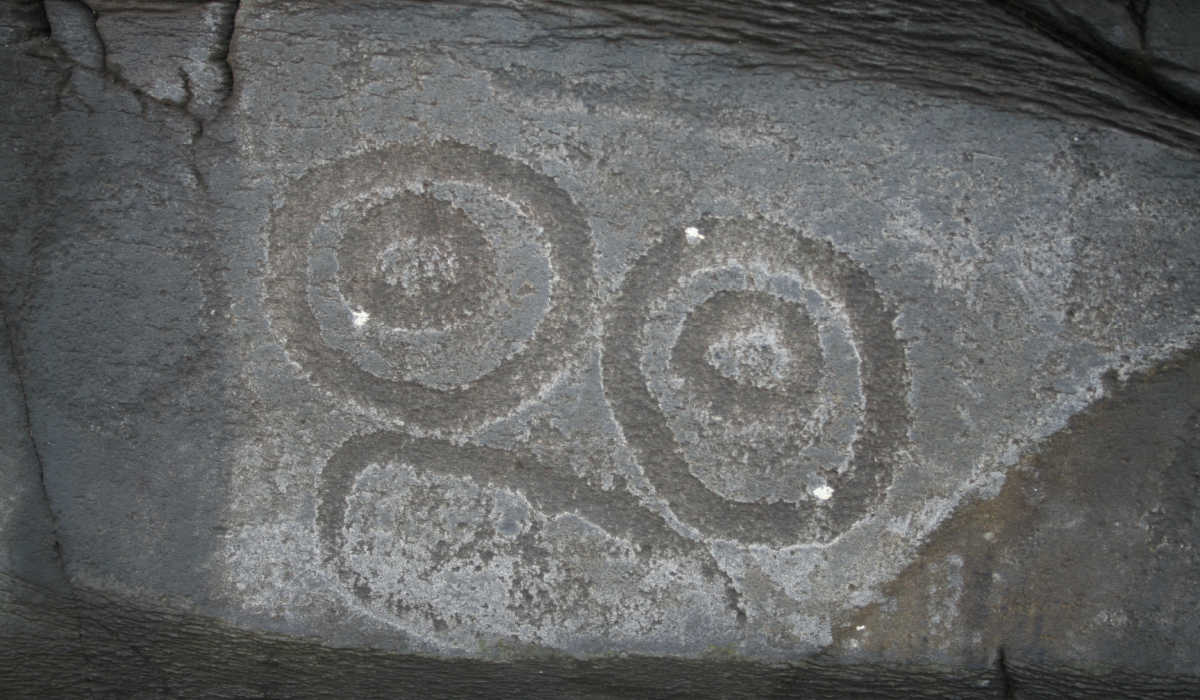 This past summer, I made my first trip over to Wrangell since I was about 12. Nothing against the town, I just never really had a reason to go.

I went with a group of friends from Juneau on the Alaska Marine Highway boat and, as it happens, they didn’t know what to do in town, either, so while we were at the ferry terminal, one of the guys called up his old college roommate who grew up there.

He told us to go visit Petroglyph Beach State Historical Site, over by the corner of Grave Street and 5th Avenue.

I knew that a petroglyph was a rock carving but I’d never heard of any being found in Wrangell. We were intrigued, so it was an instant “yes” from all five of us. As soon as we landed, we headed out to the beach.

On the beach in Wrangell, there are a series of about 40 to 50 carvings made in the rocks that show things like salmon, whales, and an ancient community, perhaps the early settlement on the island itself.

Petroglyphs are found all over the world and, indeed, all over Southeast Alaska, but as far as this part of the state, Wrangell’s beach has the highest concentration.

Some of the carvings are closer to the water and can only be viewed during low tide, which is why my friends and I made sure to check the tide schedule online before heading over to the beach. Luckily, we had perfect timing.

Where Did the Rock Carvings Come From?

No one really knows where the petroglyphs came from or who designed them, as they are estimated to be about 8,000 years old.

Outside of the standard “aliens did it” theory, scholars are divided as to the origin of the carvings, although they agree that there are two likely scenarios.

Some believe that the early Tlingit made them, either as a marker to tell others about good places to catch fish or to tell a story, as the modern Tlingit people do with totem poles.

Others believe that the carvings predate the Tlingit arrival in Southeast Alaska, or at least to Wrangell Island in particular. They theorize that another group of indigenous people, perhaps an ancestor group the Tlingit, were responsible.

Related to this, a popular theory I’ve heard in Juneau is that warriors from Haida Gwaii in British Columbia (which is about 300 miles away from Wrangell) could have come in canoes and made the carvings.

The oldest surviving canoe on record in Denmark has been dated to about 10,000 years ago, so it’s very possible that the Haida (who have lived in Haida Gwaii for about 12,500 years) could have developed the technology by 8,000 years ago.

My personal theory after seeing the site, which is almost certainly not true, is that a Haida or a group of Haida either drifted off course due to a storm or went to the island on a mission of exploration.

They then would have made the carvings, probably to explain their journey or to communicate a message to potential residents of the island. Again, this is just my theory and is probably not supported by the evidence.

No matter who made them, the significance of the carvings has been lost in time and even modern Tlingit scholars are unsure of their meanings.

The first step in visiting the beach, of course, is to get to Wrangell. To come by boat, you can take the Alaska Marine Highway ferry like my friends and I did or a smaller cruise ship (generally less than 1,000 people).

If you’d like to fly, you can get a charter flight from Juneau or, during the summer, Alaska Airlines stops in town as part of the Anchorage-Juneau-Seattle route. The beach is about a mile walk from the ferry terminal or about a half-mile walk from the airport.

Once you get there, there’s a walkway near the rocks that allows you to look at them from a safe distance. This protects visitors from the tide and protects the rocks, as well as the nearby soil.

Also on the walkway are several replicas of the petroglyphs, both to give a better view and to allow artists who want to make a rubbing or a sketch of the designs to do so without potentially damaging the actual carvings.

After you’ve visited the beach, you can check out some of the town’s other offerings before heading back to Juneau or (in the summer) Anchorage or Seattle.

Despite what you might think (and what I definitely thought), the find is not considered significant to archeologists.

The official reasoning is that nothing is actually known about the petroglyphs except for a rough estimate of the age of the carvings, which means there isn’t a lot of information to be gleaned, and most of what they do have is just speculation.

However, just because archeologists and scientists don’t want to speculate about their meaning or about who created them, it doesn’t mean you shouldn’t! My friends and I had a great time coming up with stories about who made them and why.

The rock carvings at Petroglyph Beach in Wrangell are believed to be over 8,000 years old, although the meanings and the identity of their carver or carvers will likely never be known.

Although you won’t be able to get close enough to actually touch the carvings, the observation walkway provides a clear view of all of them, provided you’ve come at low tide and can see the portion that’s normally underwater.

If you’re taking a cruise or an independent adventure to Alaska, you won’t want to miss a chance to take a trip over to Wrangell and see this amazing piece of pre-history.

Wrangell and Petroglyph Beach State Historical Site can’t wait to welcome you on your next amazing adventure to Southeast Alaska!