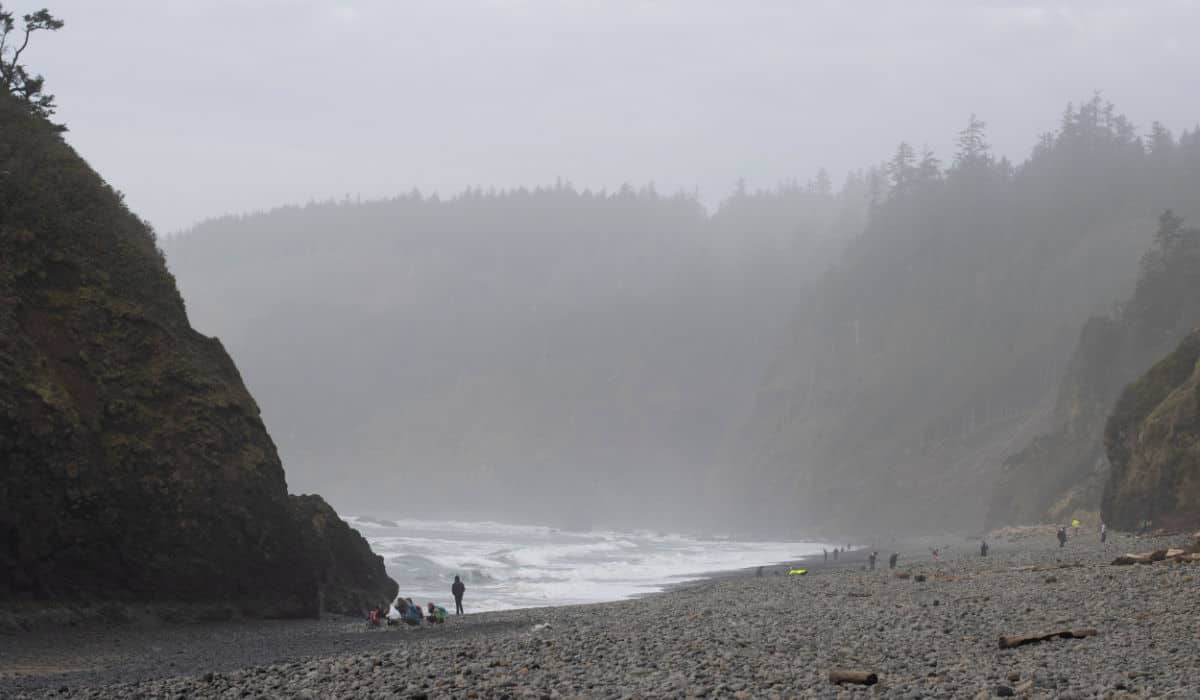 I like the beach as much as the next person but the problem with the popular ones on the Oregon Coast is they’re always too crowded. I like to relax in the sand without 750 other people next to me.

That’s why I like to seek out the hidden gems of the Oregon Coast and take the road less traveled.

Up next in our series of lesser-known beaches in Oregon is Short Beach, a beach so uncommonly visited that it’s actually hard to find information about it without going there because it is often confused with Short Sands Beach further north up the coast!

Despite the name, Short Beach really isn’t all that short. It takes its name from the nearby Short Creek, which is about three miles long. The exact origin of the name is unknown but it is believed to be named after an early family of settlers from the area.

The only reason Short Beach isn’t as popular as it deserves is its location. It happens to be right between Cape Meares Lighthouse and Wildlife Refuge and Ocean State Beach Recreation Area, both of which are extremely popular.

If you love both of those areas but want to get away from the crowds, Short Beach is the perfect destination!

Short Beach is a rather small beach, relatively speaking. It comes in at about one kilometer (or 0.6 miles) in length. There isn’t much of a beach during high tide, so you’ll want to check the daily tide table before you head over.

Where is Short Beach Located?

Short Beach is considered to be part of the city of Tillamook, although it is about a 15 or 20-minute drive from downtown.

Because it is located just south of the Cape Meares peninsula, there is really only one way to get to the beach, since the road past the lighthouse doesn’t connect with the mainland.

Getting to the Beach

The easiest way to get to Short Beach is from Tillamook, which is about ten miles away. From 3rd street, turn left onto Oregon State Highway 131.

After 8.8 miles, turn onto Meares Loop Road, then just past mile marker #4, you’ll see a sign for Radar Road. This will take you to the gravel parking lot.

Once you’ve parked your car, you’ll see a staircase and a path heading down to the beach. The staircase can be a bit steep in places but it’s recommended over the path, where many people have tripped and ended up with concussions or bloody foreheads.

You should be careful going down the stairs as well, as they were put in a group of locals about twenty years and they’ve begun to show their age in certain spots.

Things to Do on Short Beach

Rockhounding is one of the most common activities here, due to the high amount of minerals all over the beach. Some of them might be stuck to other rocks, however, so you may want to bring a pick or a small hammer.

The list of available minerals includes, but is not limited to, calcite, jasper, quartz, zeolite, petrified wood, and agate.

For a special treat, the best time to come here is during one of Oregon’s super low tides, which typically happen only a few times every year. You’ll want to look for a tide of -2, usually during the early mornings in the summer months.

During one of these low tide events, visitors will be able to access one of Oregon’s greatest hidden gems, Lost Boy Cave. Legend has it that, hundreds of years ago, a boy was trapped by the rising tide and took shelter in a cave. Unfortunately, it’s said that he drowned.

There are also fossils on the seaside cliffs but they are considered virtually unobtainable due to the unstable nature of rocks. I wouldn’t risk it, personally.

Tide-pooling is very common here as well, which you can learn more about here.

This is one of the best spots to do it, too, as you’ll have less competition from other tide-poolers, due to the relative lack of popularity.

There are many sea creatures, birds, mollusks, shells, and other things to see here. It is part of the Oregon Coast National Wildlife Refuge Complex, which is designed to protect rare species of birds and marine creatures living here.

As such, if you aren’t a frequent visitor to the area, there’s a very good chance that you’ll spot a rare bird or another creature that you may not have seen before. I recommend a pair of binoculars for looking out into the ocean for this reason.

Check Out the Beautiful Waterfalls

There are two waterfalls here, the first of which is on the north side of the beach and is called Larson Creek Falls. It’s not the biggest waterfall but it’s still pretty good. You can walk right up to the base, too.

The other one, on the south side, is unnamed and is completely manmade. It’s more of a spillway or an overflow drainage, really. Still, though, I think it’s pretty cool and worth checking out.

The best places to stay for a trip to Short Beach, Oceanside, or the Cape Meares area are in Tillamook, as it is significantly larger than Oceanside (5,204 vs 366!).

The Tillamook Coast RV Park is a great place to park and is less than nine miles from the parking lot. If you prefer a tent, Oceanside Beach State Recreation Area has a great campground.

For hotels, AirB&Bs, traditional bed and breakfasts, and other similar accommodations, Tillamook will be your best bet, as a larger town will have more options and lower prices than Oceanside.

Other Activities in the Area

I’ve mentioned both a few times already but Cape Meares Lighthouse and the Oceanside Beach State Recreation Area are both a little over a mile in either direction and are very popular for a reason.

Tunnel Beach is located nearby, which got its name because it is only accessible by a short walk through a manmade tunnel in the rocks.

The Tillamook Cheese Factory is just a few miles away as well, which is one of my favorite places to go while I’m on the coast. I love cheese and there’s nothing better than getting it as fresh as possible.

Tillamook National Forest is another great place to visit, especially for hiking, backpacking, and backcountry campers. Its wide variety of mushrooms makes it a favorite for amateur mycologists.

On the other side of Tillamook Bay, Rockaway Beach is another popular but fun place to visit. If you’re interested in fishing, the small town of Garibaldi is a great place to get a charter for your first time (or your 100th time!).

Short Beach is a marvelous hidden gem nestled between two much more popular sites on the Oregon Coast. If you’re into rockhounding, tide-pooling, exploring caves, or just relaxing away from other people, Short Beach is an excellent choice.

You’ll want to get here early, though, because even though it’s a smaller beach, the graveling parking lot only has room for about eight or nine cars and they can fill up rather quickly when the weather is nice.

If you can get here early in the morning on a summer with a -2 tide, Lost Boy Cave is a great place to visit. If not, that’s okay, too! There are a lot of other great things to see here as well.

Remember to leave no trace, be careful walking down the old set of stairs, and never turn your back on the ocean. If you keep these in mind, you’ll have an amazing time on your next outing to Short Beach!