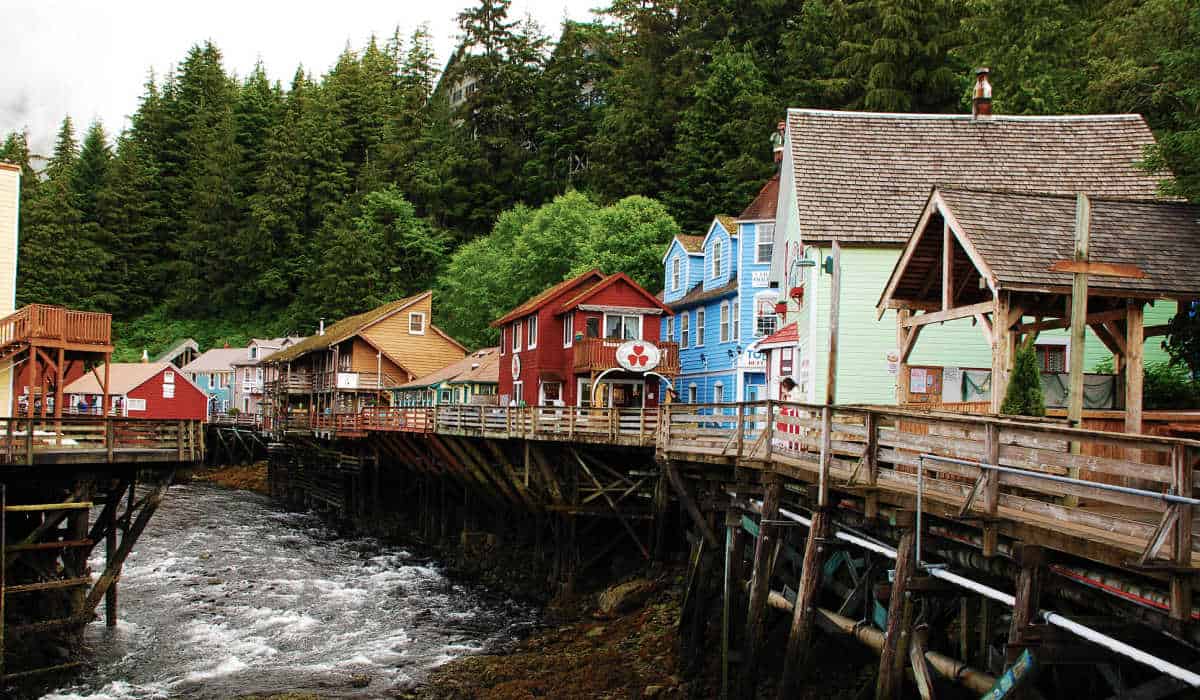 If you’re looking to enjoy the most distilled version of the PNW (meaning gorgeous nature and lots of rain) then Ketchikan, Alaska might be the perfect place.

Many people (including myself) get a wild hair at some point in their life and consider moving to Alaska. In fact, moving to Ketchikan is a hot topic in the town itself among the hundreds of thousands of cruise-goers who stop here every year.

It’s such an idyllic place that many people considered moving to Kethickan to be a way to escape the rate race of their normal life.

However, the extreme north of the PNW isn’t without drawbacks.

My wife and I seriously considered a move to Ketchikan in the past year and so I thought I’d share a few things that I learned by visiting, doing research, and talking to a bunch of locals.

However, I’ll make it easier for you so you don’t have to read all of my ramblings. If you’re on the fence about moving the Ketchikan, it’s probably not for you.

It’s hard to make a pros and cons list as some things that some people love (such as isolation) are pure torture to other people. Rather, here’s a list of 11 things that you should probably be aware of if you’re thinking of moving to Ketchikan

11 Things To Consider Before Moving To Ketchikan Alaska

The idea of escaping into the wild is on many people’s minds when they consider moving to Alaska. I seriously considered moving to Ketchikan a couple of years ago after visiting but it wasn’t until recently that I realized that what I really wanted was to run away from my current (stressful) life.

If you haven’t been to Alaska you can’t possibly understand how remote most places are.

If you get tired of Ketchikan, you can’t drive out. You can drive down the main road and that’s about it.

While travel is quite difficult compared to travel in the lower 48, it’s not bad by Alaskan standards. You have convenient ferry service and there are daily flights out on Alaskan Air.

With this level of isolation in a small town, it’s easy to end up feeling very stuck. If you don’t like the idea of an isolated small-town on the mainland, multiply it by 50 and you have Ketchikan.

There’s no big town nearby to go for a break, Ketchikan and the mountains are all you’ve got.

Ketchikan gets around 13′ of rain per year. Let’s that sink in…that’s 13 feet of rain spread out over 234 days of annual precipitation. The fact that much of this falls within fall/winter can really get to people.

If you have Seasonal Affective Disorder (or even if you don’t) then you might have a difficult time.

While the weather in Ketchikan is more moderate than in other parts of Alaska you’ll still want to be prepared for much more extreme weather than you might be used to. But at least you can avoid the heat!

I will say this for Amazon, the advent of Prime has revolutionized life in much of Alaska. Gone are the days of paying $20 for a gallon of milk.

Although, even before Amazon, life in Ketchikan wasn’t as difficult as it is in truly rural Alaska. Sure, the cost of living is a bit higher due to shipping costs but things are not impossible to get. Ketchikan has a Walmart after all.

In addition to the general cost of getting by you’ll have to find somewhere to live. This can be extremely difficult if you are looking for seasonal housing. Much of Ketchikan’s real estate market has been snapped up by carnivorous landlords which makes life difficult for many residents. Be sure to have your housing situation lined up before moving.

The breathtaking beauty of Alaska and the proximity to nature are two of the major reasons that people move to Ketchikan. If you don’t enjoy the outdoors you should probably stay away or your summers will be as boring as your winters.

In addition to the hiking and sightseeing that you would expect there is boating, snorkeling, kayaking, fishing, hunting, and a myriad of other activities.

I don’t want to downplay how awesome Ketchikan is, but one of the main complaints of the people who grow up in Southeast Alaska is boredom.

Everyone who spends a day in Ketchikan while on a cruise considers it to be a magical place – and it is. But you can only see so many trees and walk down the same street to the same theater so many times.

Once you have exhausted the local sights you might struggle to find things to do. This is especially dreary when it’s raining for months on end which limits outdoor activities and pretty much means that you get your kicks by walking around Walmart.

In small-town Alaska, there is a large influence from native tribal culture. For many people, this doesn’t affect their day-to-day life but it does provide a lot of cool learning opportunities.

The tribal culture has been embraced by the tourism industry so you can expect to see art and hearkenings to it pretty much everywhere you go.

Many people bemoan the cruise-ship season but, the reality is that tourism is the lifeblood of Ketchikan and one of the few things that bring any significant outside money into the town.

The days of subsistence living are gone in much of Alaska but nothing really came along to replace them. Most people who are going well have government jobs or work in the tourism industry. Outside of these, there are relatively few job opportunities.

One of the biggest pieces of advice that you’ll get from the locals is that you shouldn’t move here unless you have a job lined up beforehand.

For most of the year, Ketchikan has a small-town feel. With fewer than 10,000 people in town, it’s likely that you’ll know all the faces on your daily haunts.

This is comforting for some people and feels like a trap to others.

If, however, you value a sense of community you’ll enjoy it. At least, you will after you’ve been here for a few years and your neighbors warm up to you.

You’ll have to contend with the other trappings of small-town life though. Limited churches, clubs, stores, etc. are all part of the price you pay to live in a beautiful secluded location.

My wife absolutely hates all types of seafood. Whenever anyone hears this they always tell her it’s just because she hasn’t tried “good seafood”. Unfortunately, growing up in the PNW gave her opportunities to try all sorts of “good” seafood and she just hates it.

If you’re in a similar boat, one of the main draws of Alaska might be lost on you. Fishing, both private and commercial, is a way of life up here. The local delicacies almost always include seafood of some variety so you’d better whet your appetite for salmon, crab, and lobster if you’re going to be living high-on-the-hog in Ketchikan.

Hunting, likewise, is a big deal that has trickled down over the generations. Many locals hunt or are part of the industry as a good portion of Alaskan tourists are there to fish or hunt.

While Southeast Alaska is typically considered a difficult place to garden because of its cool rainy weather (not to mention the acidic soil and animals that want to eat all of your produce…) they do have an extremely long growing season.

If you’re able to create a micro-climate with the aid of a greenhouse you can grow fresh produce that is otherwise difficult or expensive to come by.

If you’re not into growing your own food, foraging can also be bountiful for several months out of the year. Ketchikan is probably the greenest place I’ve ever been and you can find ample amounts of berries naturally.

I wish this was a “it’s so hard to leave because it’s so beautiful” sentiment meant to tug at your heartstrings but, alas, it isn’t. It’s sadder than that.

Many people get stuck in small-town Alaska. It’s so far from anything else and so expensive to move that, for many people, a short-term stay in Alaska becomes a lifetime because it’s not reversible.

A weak job market makes it very difficult to save money and get out of town once the novelty wears off.

As I reread my article, I admit that it feels like a bit of a downer. It didn’t mean it to be but I wanted to douse the fire of anyone who wanted to flit off to Alaska on a whim.

It’s a beautiful place with a great community but it’s not for everyone. Be sure to visit and even work there for a season before thinking about committing the rest of your life to Southeast Alaska.

For me, personally, moving to Ketchikan doesn’t work out at the moment. But once I’m a millionaire maybe I’ll consider retiring there.