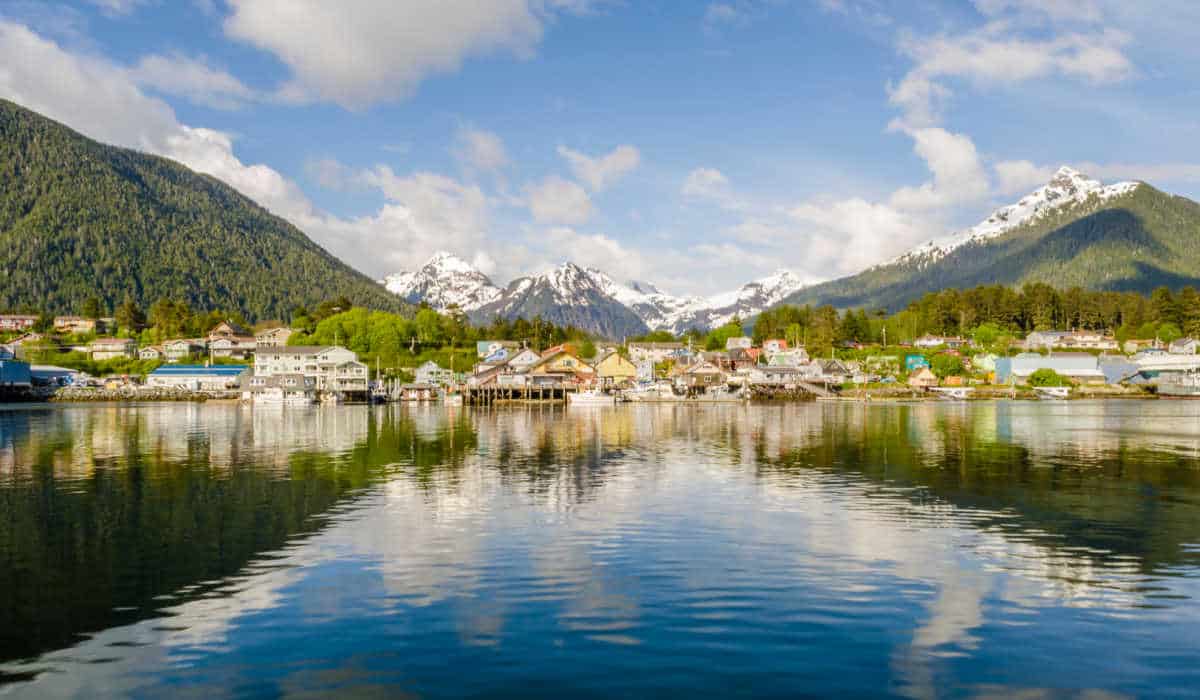 Stika and Ketchikan are two of the most popular non-Juneau cruise destinations in Southeast Alaska.

If you’re looking to fly in (or take the Alaskan Ferry from Seattle) then you’re looking at completely different experiences, despite the fact that both cities are located in Southeast Alaska. Hopefully, we’ll be able to shed some light on which one is right for you

The problem also exists for those on Alaska cruises as there are a good number of cruises that let you enjoy one and miss the other one entirely. This is especially true of short Alaskan cruises where you really have to optimize your time ashore.

So, if you only have time to visit one city, which one should you choose? Is Sitka or Ketchikan a better destination? We’ll start by taking a look at each city.

Sitka is a small fishing town made up of parts of Chicaghof Island and Baranof Island, with a population of just over 1,000 people.

It is an excellent place to grab a fishing charter, which will allow you to catch halibut, salmon, and other types of fish.

The company will then send your caught fish to a processing facility and the ready-to-eat product will be mailed directly to your home.

Sitka is also a great place to view wildlife, as the famous Fortress of the Bear can be found just a few miles north of the city center.

The Fortress of the Bear is like an orphanage for baby bears who have lost their parents and would not be able to survive out in the wild on their own.

The main cruise ship docks in Sitka are also a few miles north of town. A free shuttle transports passengers from the docks to the city center.

Sitka also holds the distinction of being the largest city in the United States by area. The downtown portion is comparatively small, but there are many activities, fishing spots, and other points of interest around the islands.

Ketchikan is a slightly larger fishing town located on Revillagigedo Island (known to the locals as Revilla). One of the major votes in favor of this city is that there are nearly 10x as many people living in Ketchikan which has a population of just over 8,000 people.

Ketchikan is also a great place for a fishing charter and, depending on the season and your location might have a slightly different selection of fish available to catch.

The city is rich with the history of the Tlingit people, the Alaska Native tribe who have inhabited the area for thousands of years.

There are three major parks in the city dedicated to showcasing totem poles, the traditional Native symbols that were sometimes given as gifts and often used to tell stories.

Saxman Totem Park is south of the city in the village of Saxman. My college roommate, still one of my best friends to this date, used to be a tour guide there after he graduated high school.

I have never been to Eagle Totem Park inside the city itself, but I hear that it’s pretty cool as well.

The last time I was in town, I went to Totem Bight State Historical Park, which is about ten miles north of the city.

The park also includes a beautiful beach with a great view of nearby Gravina Island, the location of the infamous “Bridge to Nowhere” project championed by the late Congressman Don Young.

Despite popular opinion down south, many outsiders would have liked to see that bridge built.

Gravina Island may have no permanent population, but it does have one very important feature: Ketchikan International Airport.

At present, there is a barge that transports both passengers and vehicles from downtown Ketchikan to the airport, which costs $6 per person and $7 per car.

It has never happened to me, but I know a lot of people who have missed a ferry and therefore their flight because they mistimed the departure.

There is also a unique experience in Ketchikan, as there are guided tours you can take in the back of an H2 Hummer.

I’ve never gone, but I see the vehicles every time I’m in town. I don’t know, it looks kind of fun.

Many people who take an Alaskan cruise list a day a Ketchikan as their favorite time of their whole trip.

Now that we’ve taken a look at each town, let’s compare the two to help us decide which is the better travel destination.

Ketchikan’s population is over eight times that of Sitka’s, although Sitka is the larger city by area.

Ketchikan has a Walmart, a McDonald’s, a Safeway (Vonn’s, for those on the east coast), and two Subways.

Sitka has a McDonald’s and a Subway, but little else in the way of chain restaurants or businesses. Most of the shops are locally owned.

For anyone flying to either location on either Alaska or Delta Airlines, both airports are on islands (Gravina Island for Ketchikan, Japonski Island for Sitka).

Rocky Gutierrez Airport in Sitka does, however, have a bridge going into town, unlike Ketchikan International.

This is just a personal note, as it does not affect the safety of flying or much of anything other than my own comfort, but Ketchikan’s airport has a standard-length runway.

Sitka’s, however, is just a little short. It’s always a bit of a rough landing every time I’ve been there.

There are airports up north that just consist of a gravel runway, so I really shouldn’t be complaining here, but still, I like my modern conveniences.

Which One Should I Choose?

This is actually one of the most difficult choices of city pairs in Southeast Alaska because the towns are very similar in many ways.

As usual, I’m going to maintain my “you should see both” stance, but I am also going to break from tradition and offer a few recommendations.

If you’re taking a cruise ship and have a few hours to spare, I’d say Ketchikan. Everything is spread out and will take time to see everything you want to see.

If your cruise only offers two or three hours in port, I’d recommend Sitka. Everything is so compact and centrally located, that it makes a great place to get everything done quickly.

If you’re flying in for a vacation, I’d suggest Ketchikan. I have a lot of fun visiting my friends in Sitka, but I think I’d run out of things to do if I was on a solo journey.

Either way, both cities are beautiful and amazing, and I almost guarantee that you’ll have an amazing time no matter which one you choose!

If you’re on the fence, be sure to check out our other comparison of Southeast Alaska’s tourist towns: