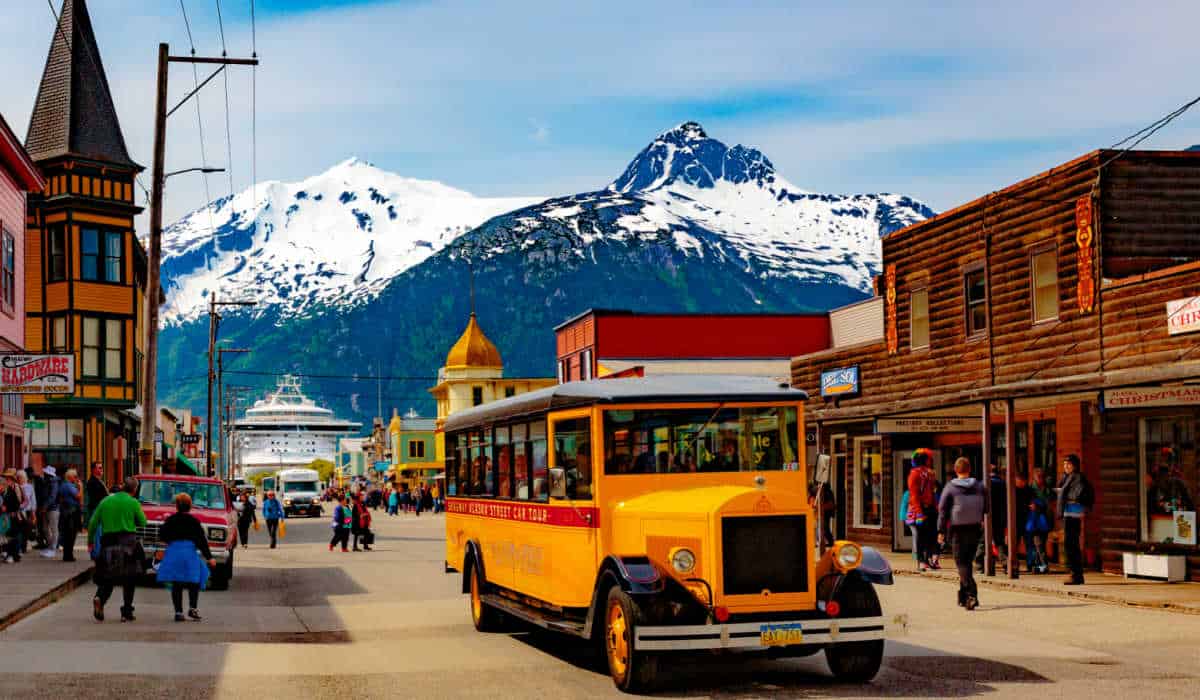 Skagway and Ketchikan are two of the most common travel destinations (that aren’t named “Juneau“) in Southeast Alaska.

If you had two options for cruises, but each one only stopped in one of the places and not the other, which should you choose?

Let’s take a look at each place individually, then compare them, in order to help you figure out which one you’ll like best.

Skagway is a small mining town on the Alaska mainland, just a few miles from the Canadian border.

The town has a rich history dating back to the 1800s when it was founded during the Klondike Gold Rush.

Many of the downtown attractions are related to this history, with various museums, historical reenactments, and points of interest related to the Gold Rush-era town.

The town’s underworld was famously run by a conman and thief, Soapy Smith, who had previously been a business rival of Robert Ford, the man who shot Jesse James. A lot of exhibits are focused on his life and times.

Most of the major points of interest, shops, and restaurants are centrally located downtown, just a few blocks away from the cruise ship docks and the Alaska Marine Highway ferry terminal.

Skagway is also connected to the road system, with access (through Canada) to Haines, Anchorage, and Fairbanks to the north, as well as Seattle to the south.

Ketchikan is a fishing town located on Revillagigedo Island, one of the southernmost cities in Alaska.

I should clarify here what I mean by “fishing town” and “mining town,” two terms which I use quite a bit when referring to the various communities in Southeast Alaska.

These terms are mostly historical in nature because they refer to the reasons for their founding. Nearly every town in Southeast came to be because it was close to the fish or because it was centered around a gold mine.

I bring this up now because it ties into the next point, which is that Ketchikan also has a rich history, but instead of mining, it involves Alaska Natives.

Ketchikan is home to three separate Totem Pole parks. A totem pole is a Native emblem that generally tells a story and is sometimes given as gifts.

Bight State Historical Park is about ten miles north of the city and also features a beach with some of the most amazing views you’ll see in the state.

A few miles south of the city in the village of Saxman, you’ll find Saxman Totem Park, where my college roommate used to work as a tour guide a while back.

I went with him once and it was amazing. I should have gone on the tour, but I just walked through the park on my own and still had a great time.

Eagle Totem Park is very close to downtown, but I’ve never been. I’ve heard a lot of good things, but I don’t know from personal experience whether or not they’re true.

Ketchikan also has a more modern feel to it, with a McDonald’s downtown, and a Subway inside the Walmart on Don King Road, a couple of miles from the ferry terminal.

I wish I could tell you that street was named after the boxing promoter and not a former local politician, but unfortunately, that’s not the case.

If you’re more interested in driving for long periods of time, you’ll prefer Skagway to Ketchikan.

If you’re interested in a fishing charter, where you’re taken out on a boat by an experienced local guide to catch fish, which are then processed and mailed to your home, I’d recommend Ketchikan.

If you’re interested in the late 1800s mining boom, Soapy Smith, or the ghost town of Dyea, I’d go with Skagway (and probably rent a car!).

If you prefer chain restaurants, there are none in Skagway, but Ketchikan does have McDonald’s, Subway, and a Godfather’s Pizza.

If you’re more interested in walking than taking public transportation, renting a car, or taking a Taxi, Lyft, or Uber, Skagway will be more fun for you.

If you’re taking a cruise ship, you can go to either place. If you want to drive from Seattle or Anchorage, you’ll want Skagway. If you’re flying on Alaska or Delta, you’ll want Ketchikan.

If you want to fly to Juneau and take an Alaska Marine Highway ferry boat, you can go to either or both! Just be aware that the ferry to Ketchikan from Juneau takes around 18 hours and the journey to Skagway is about four or five.

If you’re still not sure which place is for you, check out how we spent a day in Ketchikan during our cruise to see what’s available.

Once again, I will state that I love both places equally and I highly recommend visiting both on your visit to Alaska if you have the time.

However, if you have to choose between one or the other, either as a cruise destination or for a stay of a few days, the above guide should help you choose the one that fits your needs the best.

No matter whether you choose Skagway or Ketchikan (or both!) for your Alaska visit, I’m sure you’ll have an amazing time and we look forward to seeing you soon!