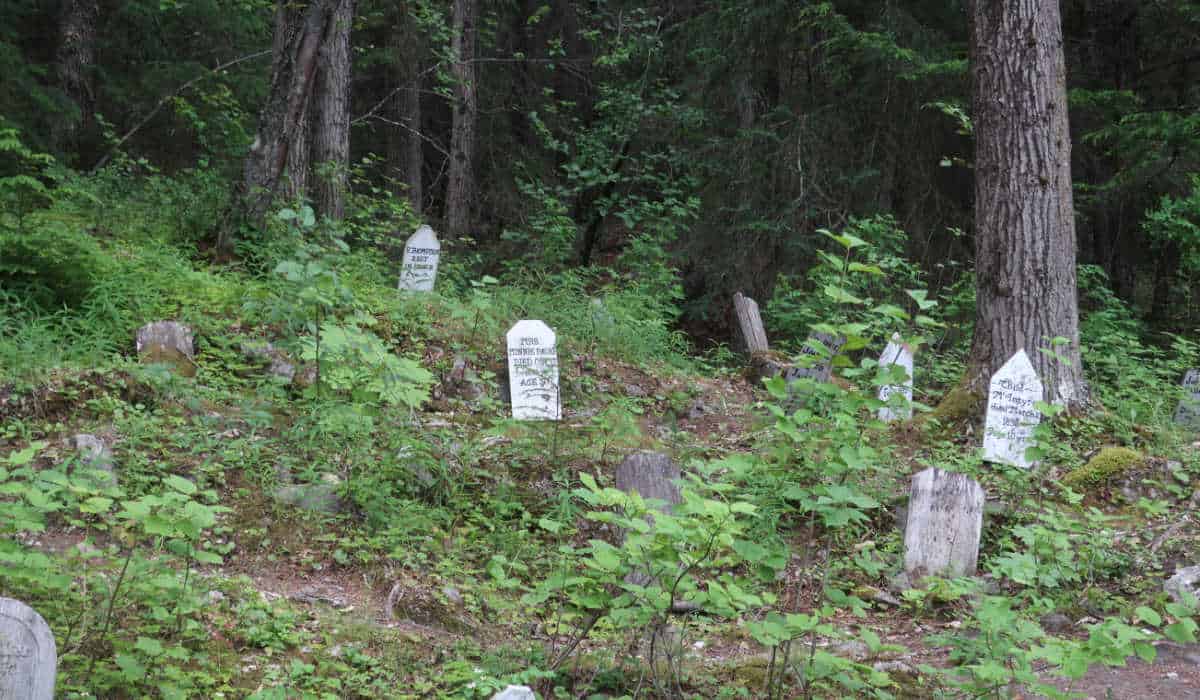 I recently took a day trip with some friends up to Skagway and, on the Alaska Marine Highway ferry ride up from Juneau, we discussed what we wanted to do while we were in town.

The one thing everyone agreed that we wanted to do was to check out the famous Gold Rush Cemetery that we’d heard so much about since we had a few hours and, being that we live in Juneau, weren’t too interested in the gift shops.

First, I’ll explain how to get there, then I’ll talk a bit about the history of the cemetery and why it’s so popular.

How to Get to Skagway’s Gold Rush Cemetery

Because Skagway is a small town, The Gold Rush Cemetery is easily walkable, even though it’s on the other side of town.

Once you arrive at either the cruise ship dock or the Alaska Marine Highway ferry terminal, your walk into town will take you to First and Main. All you have to do is walk two blocks over to State Street, then straight on up for about two miles.

Once you get to the railroad yard, there’s a dirt path that leads up to the cemetery and Lower Reid Falls, a beautiful waterfall about 100 feet high, which gives a great opportunity for picture taking.

There is also the on-demand Skagway Municipal and Regional Transit (SMART) bus service, which will take you about a half-mile from the cemetery and only costs $5 for an all-day ticket.

History of the Cemetery

According to historical records, the first burial at the site took place in the early spring of 1898. It served as the final resting place for many of the prospectors who came in search of gold but were unable to survive the harsh winter.

In 1908, Pioneer Cemetery was built across town, and outside of Martin Itjen’s burial in 1943 where the ashes of his wife were also scattered, no one else has been interred here since that time.

A total of 174 people are buried here, although there are believed to be as many as 41 unmarked graves here and 13 known sites where the name of the deceased is not revealed by the tombstone.

Many prospectors were laid to rest here, although certainly, the most famous tombstone at the site belongs to controversial figure Jefferson Randolph “Soapy” Smith.

There are many museums in town that tell the story in greater detail, but the short version is that Soapy Smith was a con man who was associated with Jesse James’ gang in Colorado, who then moved up to Skagway and was instrumental in founding the town.

He quickly became a powerful and influential figure in the city’s underground, from running illegal card games to having the town’s US Marshall on his payroll. The saloon that served as his base of operations was nicknamed “The Real City Hall”.

After his gang conned a returning miner out of $2,700 worth of gold (almost $100,000 in today’s money!) in a crooked game of three-card Monty, he was involved in a shootout on Juneau Wharf and died instantly from a bullet to the heart.

He was buried a few yards outside of the Gold Rush Cemetery, as he was not a particularly beloved figure and the townsfolk did not want his remains to be buried with the others. Most of his gang was run out of town shortly after his death as well.

Due to various thefts and decay, his final resting place is currently on its fifth headstone, which was erected in 2008.

If you’d prefer to go as part of a group, most of the local touring companies make a stop here and offer a guided tour of the site.

For some of these adventures, like Klondike Tours’ White Pass Deluxe Tour, you’ll need a passport, as many of these tours extend into the Yukon Territory, on the other side of the Canadian border.

This is a great way to learn more about the history of the Gold Rush and the building of the cemetery from a local guide.

For people arriving outside of a tour group, the only way to learn about the history of the individuals buried there is by reading a sign in the parking lot. There is no graveside information posted inside the cemetery, outside of what the tombstones themselves reveal.

If you are traveling by yourself, it’s not a bad idea to take a picture of the sign in the parking lot, so you can refer to it on your walk.

Other Skagway Cemeteries & Attractions Of Note

While Skagway is one of my favorite places to visit in Southeast Alaska, I won’t lie and say that there are tons of things to do.

However, since there are a finite number of things to do in Skagway, you better hit every single one of them! Here are a few close by that you’ll want to snap a picture of before heading on to another town or back to your cruise ship.

Outside of Soapy Smith’s final resting place and the beautiful waterfall, the other major attraction is the giant rock that has been painted gold, which is found in the parking lot.

Martin Itjen, in addition to being the founder of the Skagway Street Car Company, was a famous local jokester who painted the rock and proclaimed it to be the largest gold nugget in the world.

In 1942, he had it chained to a tree in the cemetery, so he could “make darned sure” that no one was able to steal it.

The first recipient of Itjen’s tour (which included the cemetery) was none other than then-US President Warren G. Harding, who was the first Commander-in-Chief to ever visit the state.

The tours ceased after Itjen’s death but in 1985, a local man named Steve Hites and his wife decided to bring the tour back following the exact route, which Itjen had laid out in a 78-rpm record recording he made on a trip to Hollywood in 1935.

The 1.5-hour tour still operates today and picks up thousands of cruise ship passengers directly from the dock every year to show the town’s beauty and tell the story of its early beginnings.

A lesser-known but more interesting (at least in my opinion) cemetery in Skagway is known as the Slide Cemetery.

The area holds a tragic history that dates back to the late 1800s when an avalanche struck on Palm Sunday in 1898. Hundreds of miners were attempting the Chilkoot Pass when an avalanche buried them, resulting in a estimated death toll between 70 and 80 people.

While the Slide Cemetery is not technically inside the Klondike Gold Rush National Park you should take the time to view both as they are right next to each other. The Slide Cemetery, while fascinating, is a grim reminder of the thousands of people who lost their lives coming into and through Skagway in search of gold.

The Pioneer Cememtery is the newest of the three olden-time cemeteries in Skagway but it’s just as interesting and you might as well visit all three for the trifecta!

This cemetery was used by the town of Skagway after the Gold Rush Cemetery and Slide Cemetery were no longer in use.

Given as it’s a bit more recent, you can actually find a complete list of all those who are interred at the Pioneer Cemetery.

Despite its somber origins, the Pioneer Cemetery is now a popular destination for tourists visiting Skagway. Visitors enjoy exploring its multitude of grave markers while taking in stunning views of nearby mountains and valleys. The cemetery is open year-round and admission is free; however, guests are asked to respect its residents by staying on designated paths while exploring its grounds.

Overall, the Skagway Gold Rush Cemetery is an excellent way to learn about the rich history of Southeast Alaska and is a must-see for anyone interested in the Klondike Gold Rush.

I recommend coming here as part of a tour group since a knowledgeable local guide will be invaluable in explaining the site’s history, although if you prefer to come on your own, the short walk through town is definitely worth it, too.

Whether you’re in port for a few hours as part of a cruise, taking a day trip from Juneau on an Alaska Marine Highway System ferry, or are otherwise independently traveling to town, you won’t want to miss the site or the beautiful Lower Reid Falls.

Skagway is excited to welcome you on this trip through time on your next exciting Alaskan adventure!