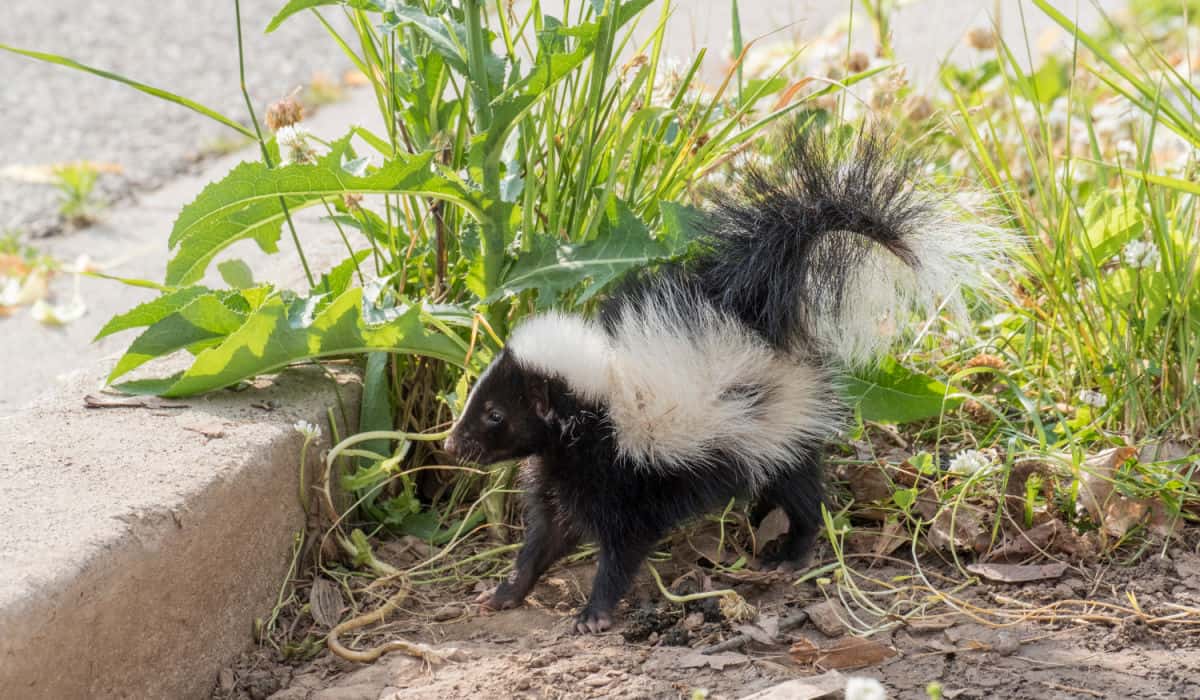 When my family and I were camping on the Oregon Coast this past year we came back to our camp late at night to hear a rustling near our tent.

Since I’m apparently deficient in knowing anything about wildlife, I decided to yell and this animal and make noise to drive it out of our camp. Not a great idea if the little explorer happens to be a skunk.

Luckily I was simply given a very stark tail-raised warning and not sprayed or I’m sure I would have spent the rest of the trip by myself in a hammock (and probably walking from place to place).

Although I didn’t know it at the time, skunks are one of the most common animals you’ll find in the PNW, especially in the suburbs where few other types of animals are comfortable.

Even some people who have lived here for a long time don’t know a lot about skunks, other than what we all learned from Pepe Le Pew cartoons as children.

The “awful-smelling spray” thing is real, of course, but I’ve never seen a skunk’s eyes bug out or jaw drop to the floor when a beautiful lady skunk walks by, so I can’t say those cartoons were entirely accurate.

I’ll skip the basics and talk a little bit about the different types of skunks found here, then I’ll explain if they have any actual value because you can be sure that I was wondering after our skunk visitor ate all of our sausages).

What Types of Skunk Live in the Pacific Northwest?

There are two main varieties that you might encounter during your time in the region, the spotted and the striped.

The striped are the ones most commonly seen in popular culture. They have jet-black fur with two white stripes going down the middle and are about the size of the average house cat.

The spotted have black fur and, as the name suggests, white spots all over their bodies. They generally prefer wooded areas like forests, while the striped variety is often found in plains and grasslands.

Both varieties are known for their distinctive foul-smelling spray and when they visit human-populated areas, they’re usually found near the water.

Are Skunks Good for Anything?

Skunks are well-known for being pests that eat garbage and spray sitcom characters with their odorous funk, ruining TV characters’ dates for decades. However, they do actually have some good qualities.

First, skunks are omnivores, meaning they’ll eat both meat and plants. They generally prefer to eat meat or other animals when given the chance, but if none are available, they’ll eat plants.

On one hand, this causes them to eat literal garbage from garbage cans or the city dump when they can find it. They’re not known for being picky eaters!

However, they’re very important for farmers and other people working in agriculture, because some of a skunk’s favorite foods include snakes, beetles, spiders, and other garden pests that can damage crops or otherwise interfere with farm work.

They’re also known to eat mice, mosquitos, snakes, and other pests that can be bothersome or damaging to humans. They are completely immune to snake venom and will suffer no ill effects after eating multiple snakes that would otherwise be deadly.

In Oregon, some people actually keep skunks as pets for these reasons, although it is illegal in every other state in the Pacific Northwest to own one.

Some of these skunks have had their smell-producing glands surgically removed, which is a highly controversial procedure as it removes the animal’s natural defensive mechanisms and could put it in danger if it gets out of the house.

On the other hand, a wild skunk only survives for an average of about three years, but one that has been domesticated can live up to ten years. Proponents argue that a skunk kept entirely indoors would have no need to spray at all.

Wild skunks are also nocturnal, which can pose a problem at first for new skunk owners, but they have proven to be highly adaptable and can adjust to being awake during daytime hours.

They’re social creatures, so they enjoy being held and will often be friendly toward dogs or other pets around the house, but they have been known to bite if they’re threatened, so you’ll want to make sure you’re up to date on your rabies vaccine.

Tips for Dealing with Skunks

If you see a skunk in the Pacific Northwest, you have nothing to worry about. You’re very unlikely to get sprayed unless the animal feels cornered or threatened.

You can take a picture, probably from a distance, if you’d like, but as long as you don’t make any threatening movements toward one or let your children (or your husband) chase one around, you should be okay.

It’s also a good idea to keep dogs on a leash when walking on trails or in fields where skunks live, especially if your dog likes to chase smaller animals. Otherwise, you may have a very unpleasant car ride ahead.

It’s best to simply let them go about their day and take care of the nasty insects, snakes, and rodents that can be an awful nuisance.

What Happens If My Dog or I Get Sprayed?

If you get sprayed by a skunk, don’t panic. It smells like something awful, of course, but there are no harmful effects on humans.

The first thing to do is to take a bath or a shower as soon as possible. A good deodorizing soap or body wash will take care of it, but if you don’t have any, grease-removing dish soap will work wonders.

You’ll also want a shampoo designed to work on oily hair, as the smell can get stuck in hair follicles. If you’d prefer a bath, you can put two to four cups of baking soda in with the hot water and soak for at least 15-20 minutes.

For pets, the smell can be removed by mixing a quarter of hydrogen peroxide, a teaspoon of baby shampoo or anti-grease dish soap, and 1/4th of a cup of baking soda.

After you lather it onto their fur, wait five minutes, then you can rinse it off, and follow it up with your pet’s regular shampoo.

People often wonder if a skunk’s spray could have set off their home’s smoke detector that started beeping at 3 AM.

An optical smoke detector uses a small LED light that connects with a sensor on the other side of the unit. If something (for example, smoke) were to break that beam of light, the alarm then goes off.

An ionization smoke detector works in kind of the same way, but with a beam of ionized particles that complete a circuit. If that circuit gets interrupted by smoke, the alarm goes off.

That is to say, the smoke alarm doesn’t “smell” the smoke, but the presence of smoke will cause a reaction that will make the alarm sound.

A skunk can only spray for a distance of about three feet, which would make it very difficult for one to set off a smoke alarm. Once the spray particles reach the ceiling, they won’t cause either the light or ionized particles to stop hitting the sensor.

Of course, it’s possible that a skunk spraying directly into a smoke detector could set one off, but as far as I know, that’s never been tried.

The skunk’s odor is strictly a defensive mechanism used to ward off predators. Most of these animals smell the spray one time and immediately learn their lesson about coming back.

The spray contains a sulfur-based compound, which is why the smell is often described as being like rotten eggs or tear gas, which is appropriate because both can activate the lacrimal glands and cause tears to come pouring out of the victim’s eyes.

Again, if you avoid upsetting or scaring the skunk, you should have no problem avoiding getting hit by its spray.

Skunks, for all their faults and odors, can actually be very useful in dealing with pests, predators, and insects that can ruin gardens or invade homes.

I don’t know that I would personally keep one as a pet, even if it were legal where I lived, but I wouldn’t tell another person how to live their life, so if you live in Oregon or one of the other 16 states where it’s legal, be my guest.

I hope this clears up some of the fears you might have had about skunks if you’re planning a trip to the Pacific Northwest! You can enjoy a lovely vacation without having to be afraid of skunk spray stinking up your rental car.