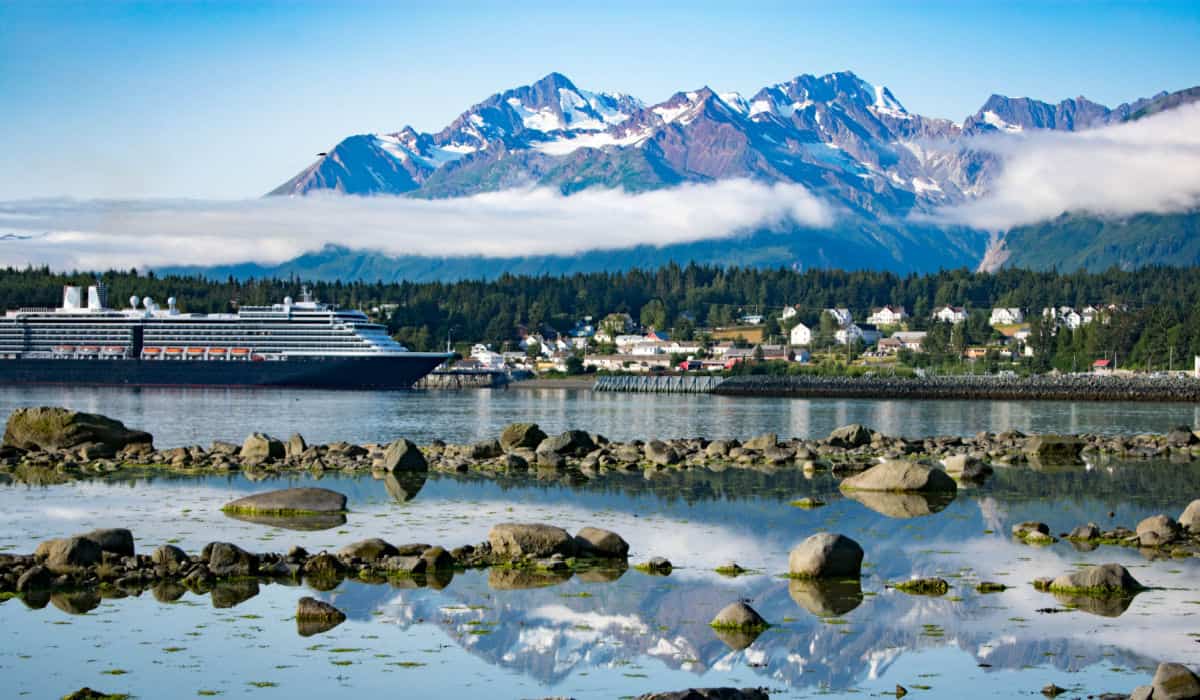 No trip to Southeast Alaska would be complete without a stop in Haines, one of the most beautiful cities in the entire panhandle.

The city has a population of about 1,650 year-round residents, although many people do come to work in the vibrant fishing and tourism industries during the summer months.

Most of the towns in Southeast Alaska were originally started as mining towns or fishing towns, but Haines is a rare exception. It was founded primarily as a trading town and eventually became home to a military installation during World War II.

So, since the town is a bit unique in the area, let’s talk about some of the best things to do while you’re visiting!

Things To Do In Haines, Alaska

Haines is famous for its annual Bald Eagle Festival, which is one of the largest in the world. When the salmon travel upstream to complete their spawning runs, the bald eagles come to have a feast.

The festival, which takes place in November, isn’t the only time of year to see bald eagles, however, as many make their homes in the Tongass National Forest and they can be seen in town during the summer as well.

If you’re up for a bit of a drive, about twenty miles from town you can visit the Alaska Chilkat Bald Eagle Preserve. During the summer months, you can take a boat or a raft tour and see hundreds of birds all at once.

The Haines Raptor Center is another great place to learn about the bald eagle and potentially see one in recovery, as it is also a recovery home for injured birds who have been found nearby.

One of Southeast Alaska’s most popular gatherings for beer enjoyers, the Great Alaska Craft Beer & Home Brew Festival (also commonly called Beerfest) usually takes place at the end of May.

It is the longest-running beer festival in the state of Alaska. Many different types of craft beers are available to taste at the Haines Fairgrounds, about one mile from the city center.

Homebrewers from around the state compete in the Best of Show competition, where the winner is crowned The Best Beer in Southeast Alaska.

3. Go on a Hike or Climb a Mountain

There are many great trails for walking or hiking, as well as mountains nearby to climb, with a wide range of difficulties, making it easy to find an outdoor adventure that suits your fitness level.

Battery Point Trail is an easy 1.7-mile path that leads to Kelgaya Point and Battery Point, both of which offer amazing views of the area.

If you’d prefer a moderate hike up a mountain, the Mount Riley Trail is 4.7 miles and winds up and around to an elevation of just over 1,500 feet.

If you’re coming on a cruise ship, you’ll recognize the old Fort Seward right away, as that is where you’ll be getting off the boat!

During World War II, the Army built it as a training camp for new recruits in the then-Alaska territory. After the war, its importance diminished and it was eventually abandoned.

Today, most of the original buildings still stand and the site is used for tours, as well as an extensive gallery of both local and traditional Tlingit art.

When most people hear the term “golden circle”, they usually think of Kingsman: The Golden Circle starring Julianne Moore and Colin Firth, but it also refers to one of the most beautiful scenic drives you’ll ever take.

It’s a circle, so you can start at any point on the route, but I’ve always found Haines to be the best place to begin.

The loop contains Haines and Haines Junction on the American side, then Carcross and Whitehorse on the Canadian side, before returning to Alaska and ending up in Skagway.

From Skagway, you can take an Alaska Marine Highway ferry back to Haines to complete the circle or to any other port the ferry serves in Southeast Alaska, British Columbia, or Washington.

If you’ve come on a cruise ship, you may not be excited about taking a different, smaller boat out on the water, but I could be wrong.

In addition to the fishing charters that are all over Southeast Alaska, you can also get a boat tour focused on seeing marine life like humpback whales and sea lions.

If you’re feeling a bit more sporty, there are kayaking and rafting tours that range from four hours to up to eight days, so you can easily find one that fits into your schedule no matter how much time you’ll have in town.

The Sheldon Museum is named after the American missionary Sheldon Jackson who brought Christianity to the Tlingit people in the late 1800s and who was instrumental in founding the city of Haines.

It contains many artifacts about the Tlingit people who live in the area, as well as about the founding of the town itself.

If you care for something just a bit different, the city is also home to a Hammer Museum, which has almost 1,500 different hammers from points throughout history. If you’ve ever been curious about hammers, you won’t find a more fascinating place in North America.

This is one of the most unique experiences in Southeast Alaska, available about seven miles out of town on Lutak Road.

In many places, they’re called ATVs or all-terrain vehicles, but in Alaska, the term “four-wheeler” is much more common.

You and your party can either ride in the four-wheeler or, if you’re over 21 with a driver’s license, you can actually drive as part of the group up Takshanuk Mountain to see some of the most beautiful scenery you’ve ever taken in.

The journey only takes a few hours and comes with a delicious, home-cooked meal, as the business is entirely family-owned and operated.

You can learn more about the experience here.

If you’re looking for the most exciting skiing adventure outside of the Swiss Alps, a heliskiing trip in Haines might be perfect for your visit, provided it’s between February 1st and May 3rd.

Heliskiing is similar to regular skiing or snowboarding, except that riders travel to the top of the mountain in a helicopter instead of taking a lift.

It’s a myth that you have to jump out of the chopper and start skiing immediately, by the way. It lands on the top of the mountain so that you and your guide can prepare to ski safely.

There are eight campgrounds in and around the city of Haines, including several state parks.

Whether you prefer a tent, renting a cabin, or bringing an RV, you’ll be able to find a place to spend a night (or several!) enjoying the great outdoors.

I recommend Chilkoot State Park since it also has great fishing and opportunities to see bears in the wild, although you should always be mindful to keep bear safety tips in mind.

The 1991 Disney movie White Fang, based on the novel by Jack London and starring Ethan Hawke, was filmed in Haines. Much of the film’s set is still intact at the Haines Fairground.

It’s about a mile from downtown Haines and it also hosts the Beer Festival in May, as well as the Southeast Alaska State Fair in June, and many other events throughout the year.

There is also a children’s playground and a farmer’s market during the summer where you can purchase locally-grown produce.

How to Get to Haines, Alaska

One of the things that will dictate the activities available to you in Haines will be your method of travel to the city. So let’s take a quick look at the options.

The easiest way to get to Haines is on a cruise ship. The dock is about a mile away from town and will provide you with a few hours to explore the town.

It is less frequently traveled than other destinations in Southeast Alaska, however, as only longer cruises tend to stop in town, so you may want to check to see if your boat will make port in Haines.

Haines is unique among cities in Southeast Alaska, as it is only one of a few where visitors can arrive in a car, although it does require driving through Canada.

If you’d like to come by boat and avoid a larger cruise ship, the Alaska Marine Highway can bring you and your car, if you wish. You can come from one of a dozen cities in Southeast or Bellingham, Washington.

Haines is a very unique experience in Southeast Alaska and one that I highly recommend, just because it’s so different than most of the other cities and towns.

If you’re visiting multiple towns, Haines is a great starting or ending point if you bring your own vehicle, as you can simply drive home through Canada or take the Alaska Marine Highway ferry down to Bellingham and drive from there.

Whether you’re interested in history, eagles, hammers, or the great outdoors, you’ll find something you love on your next trip to Haines!