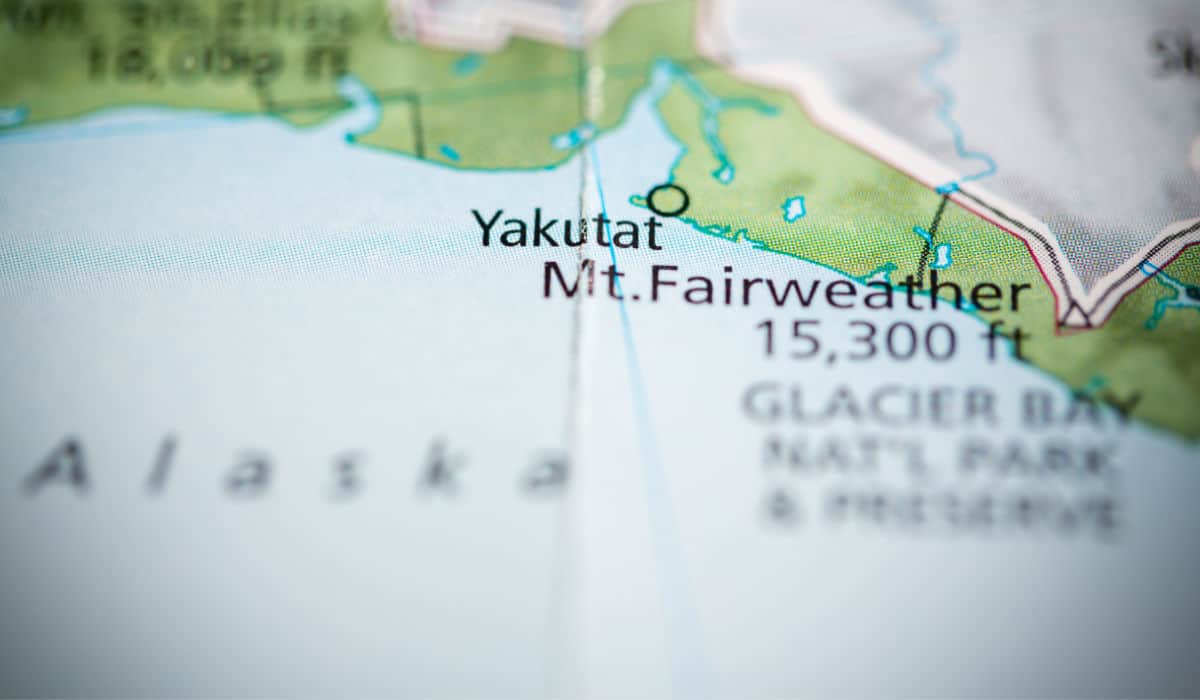 One of the most fascinating communities in Alaska is Yakutat, at the very top of the Southeast Alaska panhandle.

It is a small village of about 650 people and is technically speaking actually a Borough (the Alaskan equivalent of a county). It is both one of the largest county or county equivalents by area and one of the least populated in the entire United States.

This makes Yakutat an excellent place to enjoy nature in solitude, while at the same time having access to more services than you might otherwise find in an Alaskan town of this size.

If you’re considering making Yakutat part of your next Alaskan adventure, you’ll want to know the best things to do while in this unique town. First, let’s discuss the best ways to get to town.

How to Get to Yakutat

Yakutat is actually one of the easiest places to visit in Southeast Alaska, despite the fact that cruise ships very rarely go there, if ever. In 2015, the village welcomed exactly two cruises during the entire season.

The airport in Yakutat is served by Alaska Airlines and receives flights originating in Seattle, Juneau, and Anchorage.

Yakutat is also served by the Alaska Marine Highway System and is the endpoint of the two major routes. On the southern end, it is part of the line that originates in Bellingham, Washington.

It is also the final stop on the line that travels through the Gulf of Alaska and on through to the Aleutian chains, which makes over 20 ports that can be reached from one ferry terminal!

Check Out the Abandoned Train

About half a mile from an area cannery is a city park that holds an abandoned train from one of the world’s most fascinating train lines.

The Yakutat and Southern (Y&S) Line primarily existed to transport fish to the cannery from a site on the Situk River, about ten miles away.

The railway was also briefly used by the United States Military during World War II to transport equipment to the garrison and airstrip they had constructed a few miles from the then-center of town.

Today, you can come to the park and see the remaining pieces of the world’s only fish-transporting train.

During the first week of June every year, the village celebrates its annual Tern Festival, celebrating the beloved bird. It is not related, however, to the song Turn! Turn! Turn! by The Byrds. That might be my best and worst joke yet.

Yakutat is also a great location to see the Aleutian Tern year-round, which is a relatively rare seabird that only lives in certain places in Alaska and Russia.

The village is the best place to see them, as they use the nearby Situk River Flats as a breeding ground. It has become the center of Aleutian Tern research for this very reason.

Go For a Hike or a Stroll

There are many unique walking opportunities within the Yakutat Borough, including my personal favorite, the Russell Fjord Trail.

It is a short walking path that is less than one mile each way and not very steep, which makes it a great opportunity to explore a landscape that was built by a receding glacier! Please believe me when I tell you it is one of the most incredible things I’ve ever seen.

As with nearly every walking trail in Alaska, you’ll want to watch out for bears, moose, and other large animals that live in the area. You’ll also want to watch out if it’s raining, as the lower points of the trail are prone to flooding.

If you’re up for a bit of a longer hike, the Dangerous River Trailhead is 3.8 miles each way and is graded as a moderate hike. It’s to the south of the Dangerous River, where you can often see icebergs from Hubbard Glacier floating by.

Go on a Canoe or Kayak Tour

Speaking of Russell Fjord, it makes the perfect location for kayaking, either independently or as part of a tour group.

Some people rent kayaks in town, put them on top of their rental cars, drive to the beach, and immediately get in the water. However, others will rent folding kayaks, then take a float plane deeper into the fjords and paddle back to town.

Sometimes there are also canoes available for rent, although this isn’t always the case. Because of the way the local fjords are set up, you may have to portage (carry) your canoe or kayak at multiple points while on your journey.

Mount Saint Elias is the second-largest mountain in both the United States and Canada and can easily be seen on a helicopter tour from Yakutat. The summit lies at an elevation of 18,008 feet, only about 2,300 feet shorter than Denali.

From wheels up on the way out to wheels down on the way back, it’s about a two-hour journey to the mountain and back.

If you are an experienced mountain climber, you could also try an ascent of the mountain, although it is considered rather difficult but not impossible unlike certain other mountain faces in Southeast Alaska.

That’s not a typo! Yakutat is, as far as I’m aware, the only place in Alaska where surfing is common, because of its unique location on the Gulf of Alaska.

There is a rental shop in town if you need a board or other equipment, then you can head on out to one of the many beaches and get ready to shred the city’s famous 25-foot waves!

Southeast Alaska is known for its excellent fishing opportunities and Yakutat is no exception! The village offers fishing charters that catch halibut, ling cod, rockfish, black, and king salmon in the Gulf of Alaska.

However, thanks to the numerous lakes and streams throughout the area, there is also plenty of freshwater fishing.

If you’re lucky, you’ll be able to catch several types of salmon and trout, as well as Dolly Varden while sitting comfortably on the shore.

Do you remember when I said the Aleutian tern tend to hang out near the Situk River? Part of that is because there are so many fish available for them to eat. That’s also why it’s one of the most popular fishing spots in Southeast Alaska.

Fishing charters are extremely popular here, so you’ll want to make sure to book well in advance. If you’d like to go fishing by yourself, I recommend renting a car so you can move between the different fishing spots so easily.

Located in nearby Disappointment Bay, the Hubbard Glacier is one of the most beautiful of the many glaciers in Southeast Alaska.

It is also one of the largest glaciers in the state at approximately 74 miles long, according to a recent measurement. For comparison, the Mendenhall Glacier in Juneau is only about 12 miles in length!

A guided tour from Yakutat generally runs about five hours but depending on the day, you might have a chance to see the glacier calve, usually in the form of large icebergs falling off. They can reach about 100 feet or the same size as a ten-story building!

The city of Yakutat has a strong military history, as the airport itself was built as a transfer point for personnel and equipment flying from Seattle to Elmendorf Air Force Base in Anchorage.

When the war was over and the US army’s presence ended, one of the items they left was a massive two-gun naval battery, which was used to protect the airfield in case of an aerial attack.

The gun, although it has been dismantled and is no longer operational, is prominently displayed on one of the most amazing beaches in Alaska, where the US Forest Service has built a park.

The beach extends for miles in both directions and can be used for surfing, beach combing, camping, picnics, and much more.

There are eight Forest Service rental cabins available in the Yakutat area and four campgrounds if you’d prefer a tent and sleeping bag instead.

Two of the best are a pair of twin cabins called “Eagle” and “Raven” after the Tlingit moieties which are the primary divisions in their culture. They’re located about three miles downriver from the Nine Mile Bridge.

Just like the trails, if you choose to rent a cabin, you should always be mindful of bears and make sure to pack out all of your trash before you leave.

Even though the population of Yakutat is relatively low, the massive size (just under 9,500 square miles), the wide variety of activities, and its unique location in both Southeast and Southcentral make it extremely unique.

Whether you’re interested in fishing, sightseeing, getting back to nature, or even just going out into a Forest Service Cabin and not seeing another human being for three or four days, you’ll find something to enjoy here.

The City and Borough of Yakutat cannot wait to welcome you as part of your next exciting Southeast Alaska adventure! Why not book today?