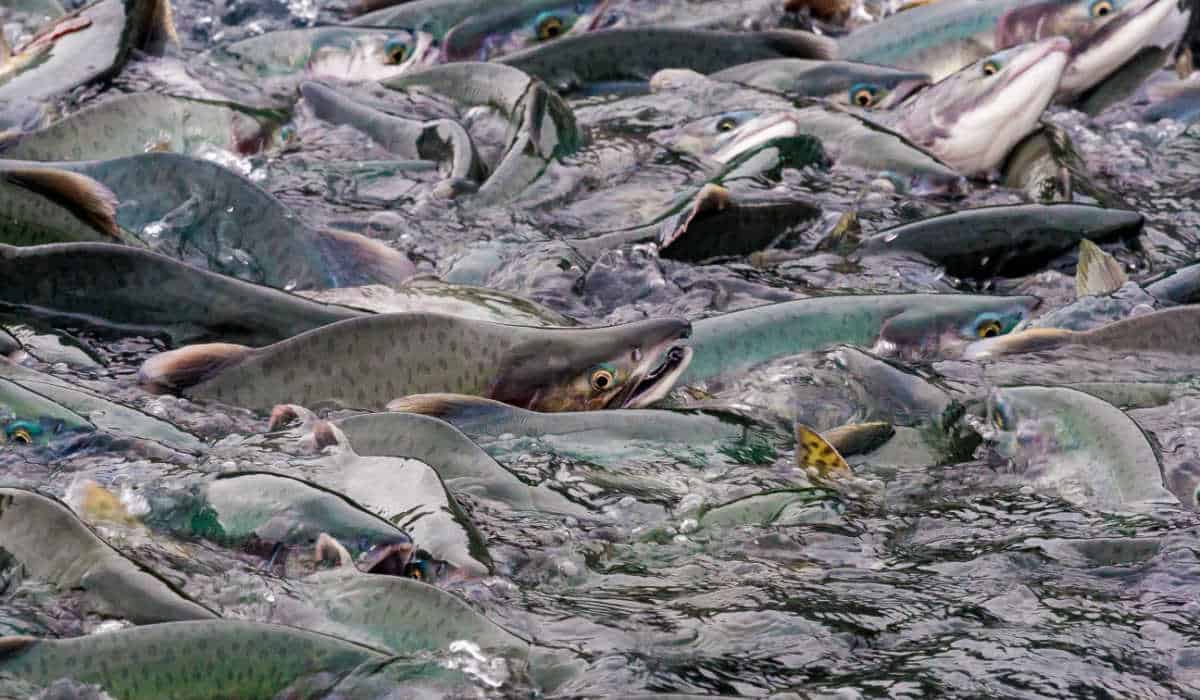 If you’re planning on coming to Alaska to fish, you’ll want to be familiar with the different types of salmon that you’ll be able to catch.

Five types of salmon live in or near the Pacific Ocean, all of which are born in freshwater, then migrate into saltwater later into life before returning to freshwater to spawn. The term for fish who live in both habitats is “anadromous”.

Let’s look at each of the five main types of Salmon that live in Alaska, then we’ll talk about a few more things that they all have in common.

The largest and (in my opinion) best-tasting salmon is the Chinook, also called the king salmon. It is the official state fish for the states of Alaska and Oregon.

“Chinook” comes from the name of the Chinookan Peoples, a group of Native Americans who mostly live in Washington State. They are also called “kings” because they are the largest species of salmon.

The average weight for a king is between 20 pounds, while the average length is 30-40 inches. The record is 146.1 pounds, which was caught in British Columbia back in the 70s. The Alaskan record is 126 pounds.

Their normal colorization is generally a shade of red, either close to pink or orange, but they can also be white.

Do you remember Arnold from The Magic School Bus or that patient from season one of House who turned orange because they both ate too many carrots?

The same principle is the reason why kings are usually reddish-pink or orange-red. Their diet is mostly zooplankton, small crustaceans, and shrimp, all of which contain a chemical called astaxanthin that gives them that reddish hue.

Some chinook salmon, however, do not have the gene that causes them to properly metabolize that chemical, so they remain white.

In times past, white chinook were unpopular up here, with most people preferring the red. However, more recently, the tides have changed and the majority now prefers the white.

Whites have a little more oil than reds, which makes the buttery taste more pronounced. Because of their size, kings are often cooked as steaks.

Chinook can easily be identified by the black spots on their tails and backs. Their gums are also black.

Kings have an average lifespan of three to seven years, which is longer than some of the other types we’re about to discuss.

Every year, Juneau hosts the Golden North Salmon Derby, in which residents compete to catch the heaviest king or coho salmon (which is up next on our list).

The winning weight is generally in the high 20s or low 30s, although there have been exceptions.

This event is held in the summer, which is the best time to catch kings. They prefer more temperate waters, so it’s best to avoid trying to catch them during a changing tide.

Silver salmon, also known as coho, are the second-largest type and are more common than kings, which can be pretty rare.

The name “Coho” comes from the language of the Halkomelem Native Americans in Washington State, although the exact meaning has sadly been lost to time.

They are also called silver salmon because that’s the main color of their flesh before their spawning runs, at which point their stomaches turn red and they developed hooked noses.

The average length of coho is 28 inches and the average weight is 7-11 pounds, although they can sometimes get up to 35.

Silvers taste pretty much the same as king salmon, just not as strongly. The filets are also bright red, in contrast to the orange of a king. It is often served smoked,

Cohos are distinguishable from other salmon because of their white gums with black tongues, as well as having fewer black spots on their tails than kings. Their average lifespan is about two to four years.

Like several other species, they have a preference for clearer waters. The best place to find them is towards the opening of a stream, as the casting of your line will tend to create a nice, clear spot to attract them.

Our third type is the sockeye, commonly called the red salmon. Sockeye comes from an English approximation of suk-kegh, the name given by the species by the Halkomelem.

The average sockeye is 24 to 33 inches in length and the average weight is about 5-15 pounds.

Despite the name, sockeyes actually start out with silver bodies. They only turn red during their spawning runs later in life.

Reds have a more moderate flavor than kings or coho, but that makes them perfect for lox, that delicious pink spread that is often found on bagels.

You can identify sockeyes by their hooked noses and their red bodies, as well as the lack of black spots on their tails.

The average lifespan of a sockeye in Alaska is about five years, although sometimes it can be a little higher.

Red salmon love the heat, which means they’re often found swimming near the shorelines in summer as they search for food. They are also not very aggressive, meaning it will take a little more patience in order to catch one.

Our fourth type is salmon is the chum, also known as the dog salmon. The term “chum” comes from “tzum“, the Chinook name for the fish that means “spotted” or “marked”.

They are also called dog salmon because of the long teeth that the males develop during their spawning runs.

The average chum is about 23 inches long and weighs from 11-20 pounds. The largest ever recorded was 35 pounds.

In the ocean, their colors are very close to the sockeye and the two can be difficult to tell apart. The biggest difference is the white tip on their tails, which has a narrower base and is often forked.

Once the spawning run begins, however, their bellies turn darker, their tops turn olive green, and they develop purple blotchy streaks or marks on the end (hence the name).

Chum has a very mild taste compared to the other species we’ve looked at so far, as its skin has less oil. It is often used for canned salmon that is sent overseas.

They are easily distinguished by the purple streaks, the large teeth, and the elongated snouts they develop during their spawning runs. The average lifespan of a chum in Alaska is just about five years.

Much like the coho, they also enjoy clear waters and are best caught near the junction of a larger stream with a small one.

Our final type of salmon is the pink, or the humpback salmon, which you may remember from one of my previous posts.

The names are a bit more straightforward here, as they have pink bellies and the males develop a trademark hump on their backs during their spawning runs.

Pinks are the smallest type of salmon found in Alaska, with an average length of about 22 inches and a weight of about five pounds.

In their early lives, their skin is a bright silver color, which gradually turns pinker as their spawning runs begin.

Pink salmon flesh doesn’t have a lot of oil, which makes it the least flavorful of the five types. It is often paired with lemon and is typically marinated before cooking, in order to enhance the taste.

They can be distinguished from other types of salmon by the fact that the black spots on their backs and tails are oval-shaped, as well as the namesake humped backs the males develop later in life.

Humpies also have the shortest lifespan of our five types, as they typically only live about two years.

Much like silvers and chum, pinks also prefer deep, clear waters. You might even be able to catch all three in the same spot! Granted, I don’t fish that often, so I don’t know what the odds of that would be.

Now that we’ve talked about each of the five types individually, I’d like to discuss some more things they all have in common, as well as some general facts.

As you will note, most salmon are named after traits they only develop during their spawning runs.

This is because the changing of the colors in the fish’s flesh also comes with a change in flavor. A more mature fish towards the end of its life will be more flavorful than a younger one.

The life cycle of a salmon begins as it hatches in freshwater, migrates to and lives a majority of its life in saltwater, then returns to a freshwater stream to reproduce.

During spawning runs, female salmon will lay their eggs in gravel beds, usually at the high point of a freshwater stream.

From here, one of two things will happen. Those eggs, called roe, will usually be fertilized by a male of the same species.

However, sometimes before that happens, the eggs are harvested and typically sold in Asia as a form of caviar. Yes, I know that the term “caviar” specifically only refers to the sturgeon eggs, but I’m not in charge of naming things. They call it caviar.

Regardless of what happens to the eggs, after the reproductive process is complete, the adult salmon die.

I grew up near a stream here in Juneau and we always knew when the spawning runs were over. Rotting fish is not one of my favorite smells.

Another thing to remember in Alaska is that there are strict daily catching limits for all five types of salmon, in order to make sure that the populations are maintained above a certain level.

These limits are subject to change at any time, based on recent population estimates. If you go through a fishing charter, the captain will know the current guidance. If you go by yourself, you’ll want to check the Department of Fish and Game’s website.

I hope this guide has helped you to have a greater understanding of the different types of salmon available in Alaska. If you’re going to charter a fishing trip from Alaska be sure you ask what type of salmon you’ll likely be catching beforehand.

I should point out that there are more types of salmon in the world than the ones on this list; these are just the ones we have up here.

There are several species of salmon that only live in the Atlantic Ocean and are very different than the Pacific varieties listed here.

Regardless of your taste preferences or favorite kind of salmon, there are plenty of them to be caught, and plenty of cooking methods to make sure that you’ll have a wonderful meal!