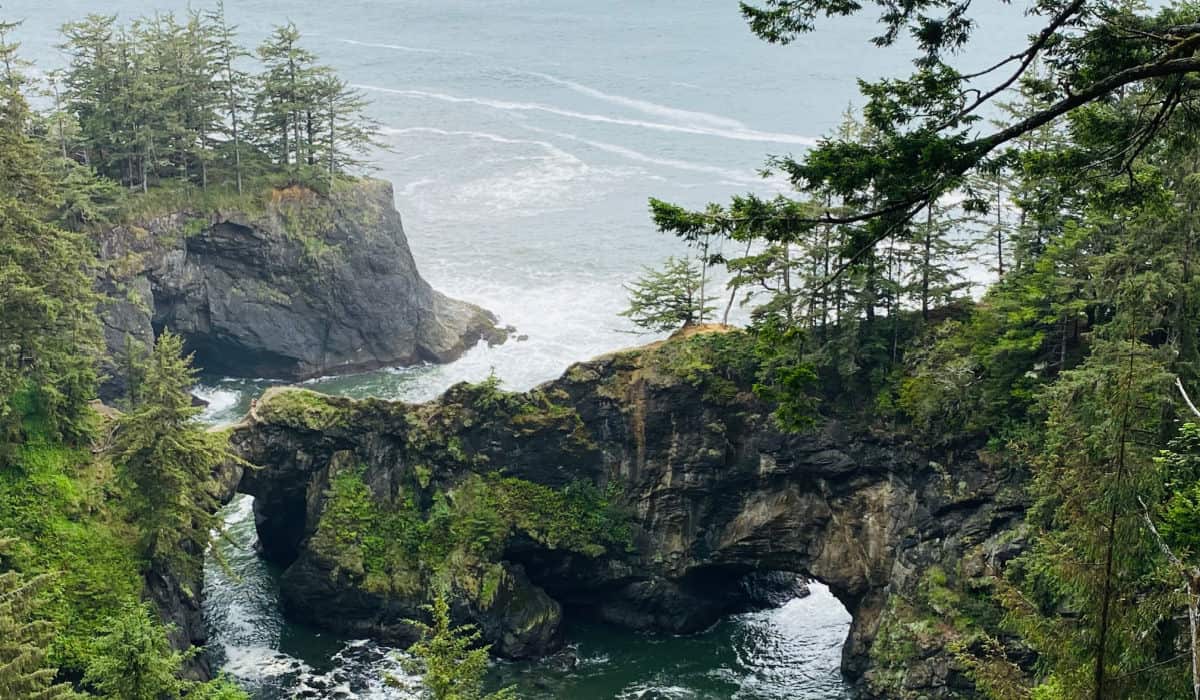 What comes to mind when you hear the phrase “Pacific Northwest”? For some people, it’s Seattle, some think of Sasquatch, and others imagine a group of states.

The definition of “Pacific Northwest” varies from person to person, with some being more strict than others as to which parts of North America actually qualify. Since I talk about the area a lot on this website, I figured that I should explain my view.

First, we’ll take a look at the actual, strictest definition of the term and where it comes from, then we’ll go a little more broadly from there.

Where Does the Term “Pacific Northwest” Come From?

Unlike most terms that have specific meanings that are sometimes archaic or hard to follow, the Pacific Northwest was named rather simply. It borders the Pacific Ocean and it’s geographically in the northwest portion of North America.

It’s sometimes called Cascadia, although I personally don’t like the term because it derives from the Cascade Mountain Range, which is not part of every state or province in what I consider the Pacific Northwest.

What Locations are Included in the Pacific Northwest?

Just like the question about what comes to mind first, nobody can seem to agree on what exactly the boundaries of the Pacific Northwest happen to be.

The one thing that everyone can agree on, however, is that Washington and Oregon are definitely included. The strictest and most narrow definition of the term would only include the Columbia River Basin, which flows through both states.

That said, many (including me!) would argue that the Pacific Northwest is made up of a lot more than just a single river’s watershed, and using the exact hydrological definition isn’t helpful or accurate.

Why does the Pacific Northwest Contain So Much Territory?

The reason that I picked those states is not simply a matter of geography by itself. The history and culture of these places are all very similar.

There are major differences, of course. New York and New Jersey are very close together and have similar histories and cultures.

However, I wouldn’t go to a bar in either state and tell them that there’s zero difference between the two states. I have 32 teeth, I like all of them, and I wouldn’t want to have any of them knocked out by an angry fellow patron.

History of the Pacific Northwest

As we look into the history of the Pacific Northwest, you’ll see that a lot of these states have more in common than you might think.

The Gold Rush of the mid-to-late 1800s was very important to all of the members of the region. It started in California when gold was first discovered in Sutter’s Mill in 1848 and it brought over 300,000 people to the area to search for gold.

Most of those people came a year later and were given the name “the 49ers,” which is where the football team from San Francisco got its name.

Other deposits of gold were soon found in neighboring states and eventually, people traveled up to Alaska via boat from Seattle or via British Columbia on land in search of it.

The history goes back much further, as many indigenous peoples inhabited the area for thousands of years before the gold rush took place.

Many of these groups worked together and engaged in trade, making them a lot closer to one another than someone from Portland might feel about someone from Southern California who recently accepted a tech job and moved to town.

Aren’t Those Places Really Different? How Can They Be a Single Region?

It is true that despite the shared history and culture between all of the places that make up the Pacific Northwest, the individual states and British Columbia have grown to be quite different.

That being said, there are still a lot of similarities. Most Seattle slang terms, for example, might not be used very often in Idaho or Montana, but the people in those states will generally know what they mean.

There are also a lot of musical and art connections between the various members of the region, not only historically by the various Native peoples, but through the present day as well.

However, the main thing that connects these unrelated places and makes them a region is geography. Not that they’re located right next to each other, of course, but their geographical features.

The Pacific Northwest is well-known for its lush forests full of old and new trees, many lakes, and waterfalls. The type of thing that most people think of when they hear the word “scenic views” or “nature.”

That’s also the reason why a few of the states aren’t included as a whole, since their geography may change drastically from one end of the state to the other.

Where Does the Pacific Northwest Region End?

Again, this is all subjective, since there are still a lot of disputes over what states and Canadian provinces make up the Pacific Northwest, but I’ll tell you how I see it.

For Alaska, only the Southeast panhandle counts. These are the traditional lands of the Tlingit people, although there are and have been many Haida as well.

Both groups are also found in British Columbia, where the Haida Gwaii Islands (formerly known as the Queen Charlotte Islands) were their original homeland.

The city of Metlakatla is made up mostly of the Tsimshian, who also originally came from British Columbia but settled on Annette Island in the 1800s.

For British Columbia, Washington, and Oregon, the entire state or province is included as part of the region.

Only the northwestern portion of Idaho is counted, as the two parts of the state are very different. Northern Idaho has the trees and lakes that are typically associated with the Pacific Northwest, while southern Idaho is more of a desert.

They’re so different, in fact, that they’re in not even in the same time zone. Northern Idaho, the part that is part of the Pacific Northwest, is on Pacific Time, while the southern portion uses Mountain Time.

The actual definition or line between north and south is debatable, but the time zone split is usually where I draw the line between the two parts of the state.

The Montana portion of the region is only the part that lies to the west of the Rocky Mountains. It’s a very large state, the fourth-largest in fact, which means there’s a big difference between one end of the state and the other.

The geography is the main part, as the western part contains the waterfalls and lakes, whereas the eastern portion is mainly plains and is more similar to the Dakotas or Kansas than Washington or Idaho.

There is also a large occupational difference between the two halves, as the eastern portion contains many farmers and oil workers, while the western portion has a lot more people in the logging industry.

Is Seattle In The Pacific Northwest?

Seattle is one of the few places that everyone agrees is part of the PNW region and is often the first place people think of when they hear the term.

Is Portland In The Pacific Northwest?

Portland is another universally accepted member of the Pacific Northwest since it is on the coast and is part of the Columbia River Basin.

Is Spokane In The Pacific Northwest?

Spokane is part of the Pacific Northwest even though it is in eastern Washington and it does not border the Columbia River or the Cascade Mountains. It plays a large part in the history of the region.

Is Vancouver In The Pacific Northwest?

Vancouver is included as part of British Columbia, which also shares the rich history of the rest of the region.

Is Hawaii Part Of The Pacific Northwest?

I’ll admit thought that, when I was in elementary school, I always thought that Hawaii was located off the coast of Florida. Thanks, weird maps of the U.S.

Once I learned where it actually is I wondered if it could be considered part of the Pacific Northwest. Well, long story short, no.

Now, these are just a few of the amazing cities of the Pacific Northwest. There are a variety of climates, places to visit, historical points of interest, and many other things to see and do all throughout the area.

Even people who have lived in the area their entire lives have not seen all that the PNW has to offer. Most Alaskans, for example, would generally not visit Idaho or Montana unless they had a reason to go, despite both being part of the same region.

Whether you live in one part of the Pacific Northwest or have never visited, the fact that there is something here for everyone makes it the perfect destination for your next vacation!