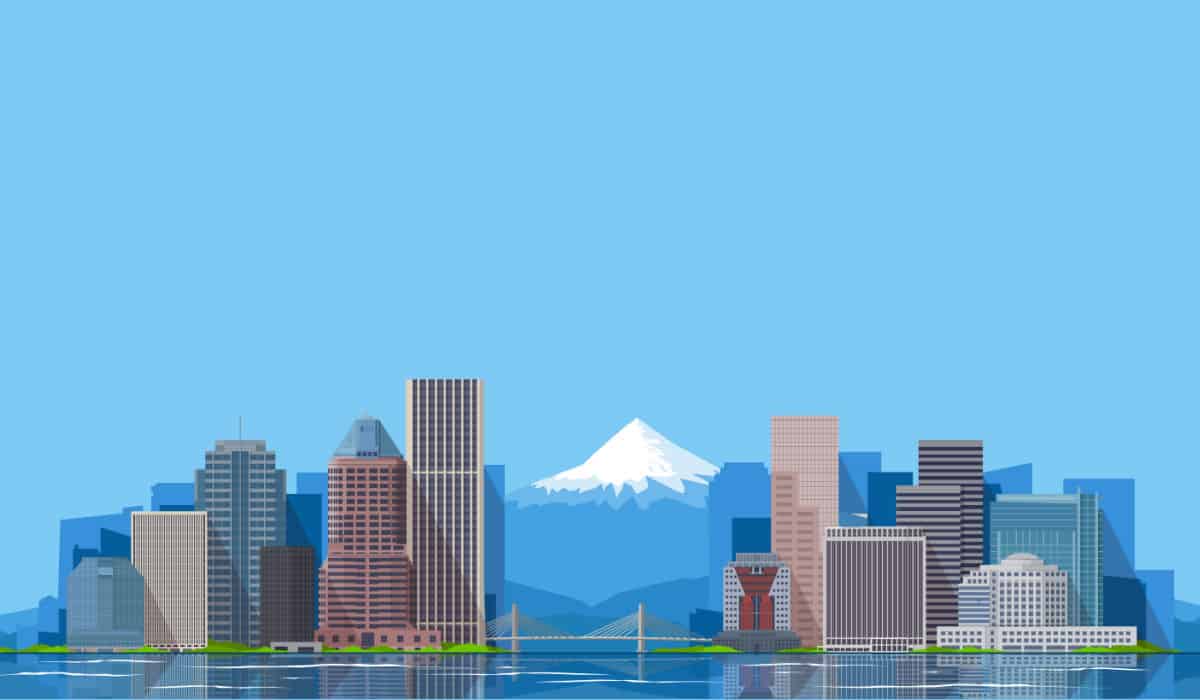 When my wife and I were debating about whether we wanted to move to the PNW and deal with the high cost of living or move to North Carolina and not have majestic mountains it was really a no-brainer.

We couldn’t leave the mountains.

But what mountains are you seeing?

Knowing which mountains are visible from Portland can help you to orient yourself within the city (and make you sound really cool if anyone asks).

However, the mountains which are visible from Portland vary significantly day by day depending on how clear it is (and how much pot smoke is lingering in the air).

As you can see, some of these mountains are in Oregon, others are in Washington, but nearly all are volcanic and part of mountain ranges that can also be seen from within the city.

However, if you are downtown you’ll be hard-pressed to see anything but buildings and tents.

So where should you go in Portland for a great view that includes some mountains? Well, there are a few places.

The mountains visible from Portland are visible only on clear days. Because Portland (like Seattle) is so often dreary and gray it has become common practice for residents to say things to each other like, “Is the mountain out today?” (referring to Mt. Hood).

Now, if you’re trying to see some mountains from Portland you’ll have to get high enough to see for miles, into another state actually.

The best places to try are:

While there are many more places throughout the city (including just about every tall building) it’s really not much of a challenge to find a good viewpoint.

Portland is unique in that it has a large number of very distinct and large mountains in the distance. Most cities have a few mountain ranges visible but all the peaks just kind of meld into a line.

All 5 of Portland’s viewable mountains, however, have such prominence that they are easy to spot and recognize.

Not to take away from the ranges they’re part of, however.

The 5 Distinct Mountains That Can Be Seen From Portland

Mt. Hood is Oregon’s tallest mountain and, being only 50 miles southeast of Portland it’s no surprise that it’s one of the most visible mountains from within the city.

Mt. Hood is a dormant stratovolcano that stands in the Cascade Volcanic Arc. In fact, all of the mountains in this list are part of the same volcanic ark and are considered to be potentially active.

At 11,249 feet Mt. Hood is one of the tallest mountains in the United States based on prominence (height from the base to the peak). If you’re looking to get out of the city when it gets sweltering you can find year-round skiing available on Mt. Hood!

Mt. Hood is the 4th highest mountain in the Cascade Range (the other residing in Washington) and it is visible from almost anywhere within the city on a clear day.

Mount Rainier is the tallest mountain of the Cascade Volcanic Arc and is considered to be one of the most dangerous volcanos in the world as well.

Rainier’s beauty is best viewed from a distance as it is considered an active volcano with a high probability of erupting in the near future. If (or when) it does, it’s likely to produce mountains of ash and mudflows that could destroy the homes of more than 80,000 people.

Located less than 100 miles northeast of Portland (as the crow flies) Rainier is typically visible mainly due to its gigantic size. It peaks at 14,411 feet which earns it the title of Washington’s tallest mountain and the most topographically prominent mountain in the contiguous United States.

Mt. Rainier isn’t quite as craggy as Mt. Hood but is an incredible mountain in its own right and well worth a view if you get the chance.

Mount St. Helens, known mostly for its devastating 1980 eruption, is a beautiful (if crippled) mountain to behold. As much as I wish I could have seen it before the eruption, its current shape has become iconic and synonymous with Washington.

Lying just 52 miles northeast of Portland, Mount St. Helens is visible on clear days (but not nearly as visible as Mt. Hood).

Just as food for thought: experts say that the next eruption will likely be even more destructive and violent than the last one which killed 57 people and left a mile diameter crater in the top of the mountain.

If you can see Mount St. Helens, it’s likely that you can also spot Mt. Adams. While it appears much smaller from Portland, Mt. Adams is typically visible as a small white smudge just to the east. If there’s any haze, you might just mistake it for a cloud.

Mount Adams is the second tallest mountain in Washington (after Rainier) and is considered to be a potentially active volcano even though it has not erupted in more than 1,000 years.

Located close by Mount St. Helens, Mt. Adams is a part of the Cascade Volcanic Arc and it is one of the largest volcanos in the Pacific Rim of Fire.

The 14,417-foot tall mountain is recognizable by its nearly flat summit which is the result of many eruptions and volcanic vents which occurred thousands of years ago.

As one of only two Oregonian mountains visible from Portland, Mt. Jefferson is also the hardest to see.

Standing well away from Portland to the southeast you’ll have to be in just the right area of the city to spot this mountain.

Mt. Jefferson is an extremely remote mountain and, due to its hostile surrounding terrain, it is one of the hardest-to-reach volcanos in the Cascade Range.

The 730,000-year-old mountain stands 10,502 feet tall. The mountain’s last eruptions occurred over 1,000 years ago and its current threat level is considered to be low/very low.

If you have the chance to see this mountain, enjoy the day in Portland because days with weather this nice don’t come around often in the PNW!

I make it a goal when I visit a city to familiarize myself with the prominent mountains in the area so I’ll recognize them when I fly in. This is particularly useful in Portland as you can see several of the mountains from the city and orient yourself from the.

If it’s a clear day and you can see mountains, you’ll never be lost in Portland!

Looking for something to do? Find the best luxury spots to eat in Portland.